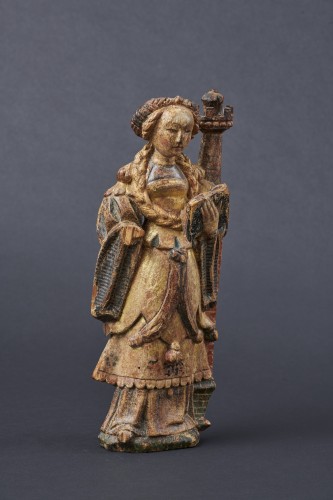 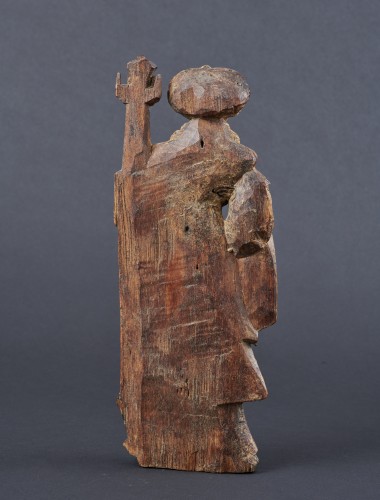 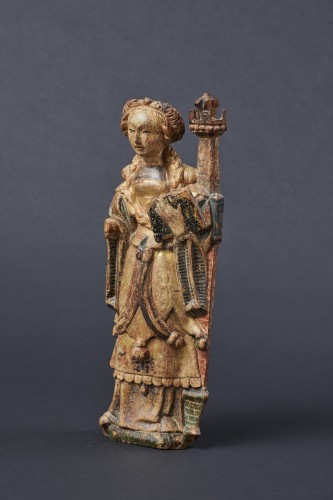 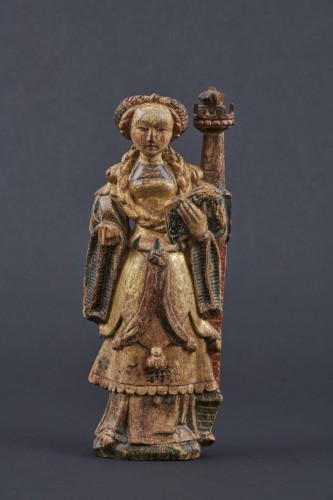 "Five hundred years after the time of their production, the 'Malines dolls' are still fascinating in many ways. In the first half of the 16th century, they were produced in large numbers, exported and appreciated in many parts of Europe. Their small size made them easy to transport. Both objects of devotion and prestige, they found their place in the cells of nuns as well as in princely courts, whose movements they followed". But behind their apparent uniformity, these works, deeply influenced by the Brussels sculpture of the Bormann dynasty, and made from a common repertoire of type and subject, nevertheless present infinite variations in style and personal accents, which give them their full flavour and reveal the singularity of our saint Barbara.

Condemned by her father to marry a man she did not choose, Saint Barbara, Princess of Bithynia refuses this union to consecrate herself to Christ. Furious, the king locks her in a tower where she is baptized in secret. Learning of her conversion to Christianity, her father brought her before the Roman authorities who condemned her to torture and then to death. Faithful to the iconographic tradition, our statuette presents Barbara standing next to the turret in which her father condemned her to solitary confinement, an open book in her left hand and perhaps once the palm of the martyr in her right. The saint is dressed in a surcoat with a fitted bodice concealed under a sumptuous dress with ample and puffed sleeves, held at the waist by a belt and a rich apron with bells.
According to the characteristics of the production, the stylized juvenile face of our Virgin, with regular features, is raised by small half-closed eyes with marked orbits and carefully chiseled eyelids. Her cheekbones are slightly protruding, her mouth small and well drawn. This round face, crowned by a rounded forehead and punctuated by a pointed chin, gives our Virgin the gentle and charming air so typical of Mechelen statuettes. This roundness is accentuated by her beaded headdress, a real Malines specificity on the scale of Brabant, wrapped and decorated with a string of pearls.
Thus, the proportions of our sculpture, its rounded face, its shimmering costume, but also the arrangement of its draperies, are all general characteristics that allow us to date our work to the beginning of the 16th century, at the time when the workshops of Mechelen experience their first success. Our statuette can thus be compared to Saint Barbara in the Museum of Fine Arts in Lyon. If the two works are formally superimposed, the superior quality of the polychrome of our sculpture must be underlined. This consists of a gilded and painted decoration which adorns the braids of the coats. It is applied to a punched background called embossing. Framed by rows of pearls in relief, stamped or drawn with a roulette wheel, the edges of our Saint Barbara's robe are adorned with floral ornaments.

Only four centimeters deep, our statuette would have been placed against the back of an altarpiece, thus concealing from the eyes of the faithful its reverse side, discreetly marked with the three pals of the coat of arms of the city of Mechelen, a guarantee mark affixed by the controllers of the guild of Saint Luke, which regulated the work of painters and sculptors in this city at the time, controlling the quality and execution of these statuettes.
As the central piece of a small domestic altarpiece, our work, in a spiritual context encouraging the development of a more personal form of piety, by its prettiness and its youthful appearance, encouraged the faithful to be appeased and to trust in the promise of Resurrection. 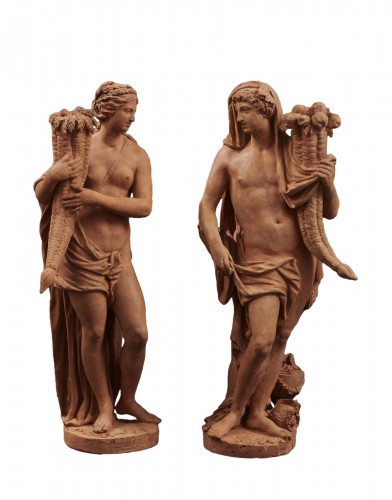 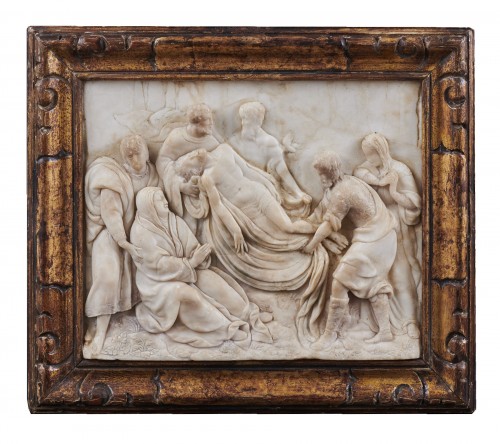 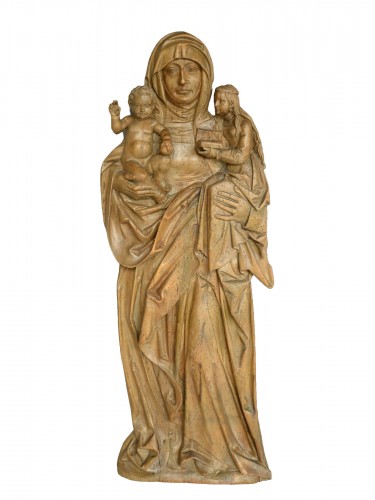 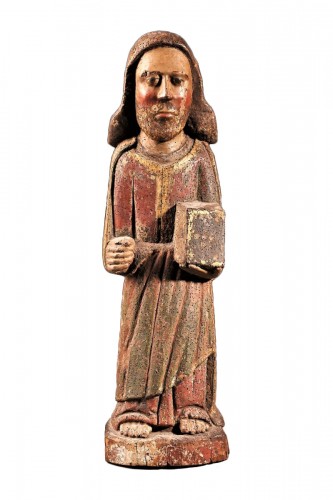 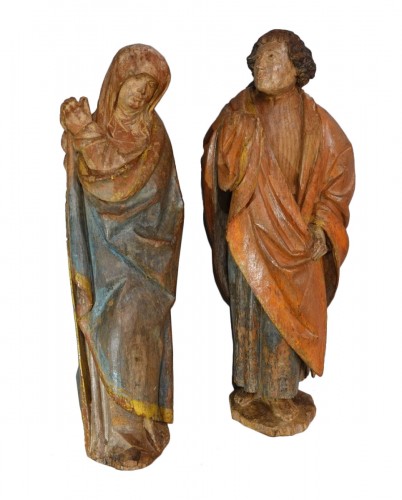