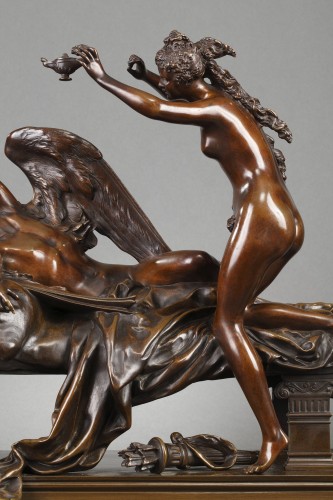 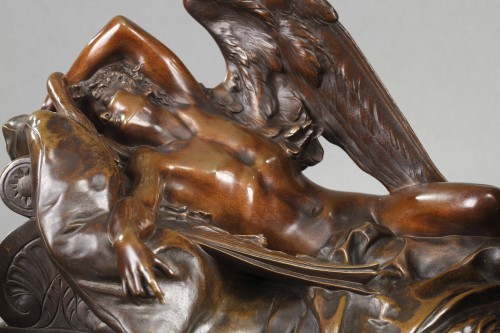 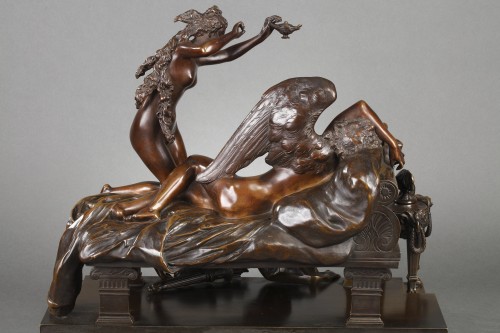 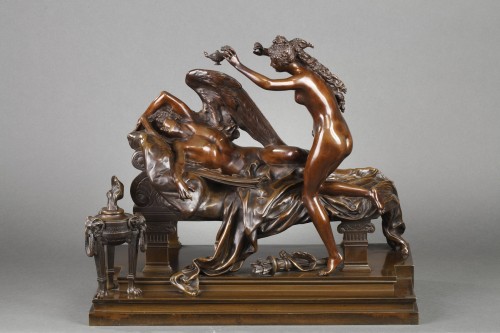 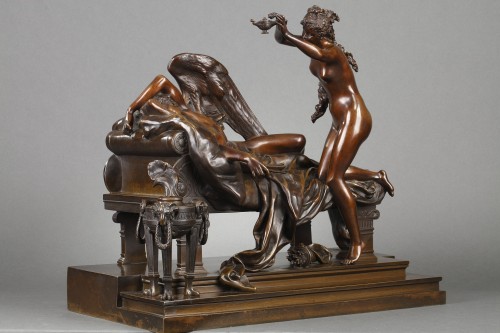 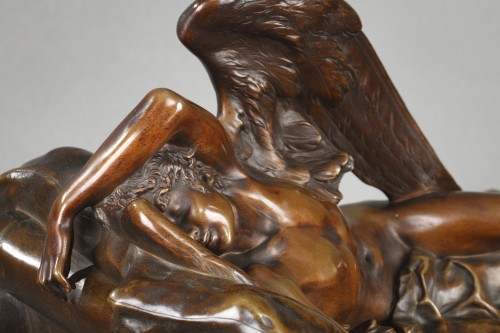 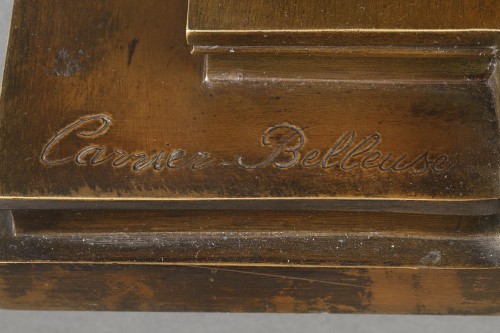 Biography :
Albert-Ernest Carrier de Belleuse known as Carrier-Belleuse (1824-1887) was one of the most prolific artists of the century and had the greatest successes under the Second Empire, enjoying the personal support of Napoleon III. His work was greatly influenced by the style of the Italian Renaissance and that of the 18th century, which he helped to bring up to date.

In 1837, the young Carrier-Belleuse apprenticed in the workshop of the engraver Bauchery. He was admitted soon after to the goldsmith Jacques Henri Fauconnier. Through François Arago, he met the sculptor David d'Angers who facilitated his admission to the School of Fine Arts. Carrier-Belleuse entered it in 1840. Noted for his skill by the great bronze companies in Paris such as Barbedienne and Denière, he soon received numerous orders for models for candelabras, pendulums, fittings for fireplaces, etc. In 1848, probably at the initiative of François Arago, who became head of state, he received his first public order for a small statue of "Mademoiselle Rachel singing La Marseillaise". In 1851, he appeared for the first time at the Salon of French Artists, where he presented two bronze medallions. From 1851 to 1855, Carrier-Belleuse stayed in England, in Stoke-on-Trent where he served as director of the modeling and drawing school of the Minton house, a large porcelain manufacturer.

Back in France, Carrier-Belleuse moved to Paris in a large workshop located 15 rue de la Tour d´Auvergne. From 1857, he made regular sendings to the Salon and became famous thanks to the success of large marbles, such as the "Bacchante" exhibited at the Salon in 1863, and acquired by Napoleon III, "Angelica" (1866) or even "Hebe asleep" (1869). At the Salon of 1867, his group entitled "Messiah" earned him the medal of honor of sculpture. It was acquired by the State to adorn the Chapel of the Virgin in the Saint-Vincent-de-Paul church.

Carrier-Belleuse acquired a great reputation in parallel for his terracotta busts which, in many respects, recall those of 18th century artists. He made portraits of a large number of celebrities of his time. He produced, among others, the busts of Napoleon III, Renan, Thiers, Grévy, Arago, Marguerite Bellanger, Théophile Gautier, Honoré Daumier, Delacroix, Hortense Schneider, Réjane… He also modelled numerous busts of mythological inspiration and historical and artistic portraits like Marie Stuart, Shakespeare or even Mozart.

Carrier-Belleuse used and trained in his workshop in the rue de la Tour d´Auvergne many young talented artists such as Alexandre Falguière, Jules Desbois, Eugène Delaplanche, Jules Dalou or Joseph Chéret; but he was best known for having been the master of Auguste Rodin who entered his studio as a practitioner in 1864.

Carrier-Belleuse devoted himself a lot to decorative sculpture. He contributed to the decorations of many important buildings. We owe him in particular the caryatids of the Renaissance theater in Paris, the pediment of the main entrance to the Banque de France, the stucco ceilings of the Lesdiguières and La Trémoïlle pavilions at the Louvre Palace, the frieze of the Palais de la Bourse in Brussels, or the decoration of the Hôtel de la Païva on the Champs-Elysées in Paris. He also received State commissions for monuments: that of Jean-Jacques Rousseau in Montmorency, of Alexandre Dumas, in Villers-Cotterêts, of Masséna in Nice. Abroad, he produced the equestrian statue of Michael the brave in Bucharest and the tomb of José de San Martín in Buenos Aires.

In 1873, Carrier-Belleuse took part in the construction of the Paris Opera house, directed by his friend Charles Garnier. He created the two monumental torchieres flanking the grand staircase in the main hall and the caryatids of the chimney of the grand foyer. In 1875, he was appointed director of works of art at the Porcelain Manufacture de Sèvres. He imprinted on it a very modern impulse which manifested  itself in the creation of a complete range of vases. 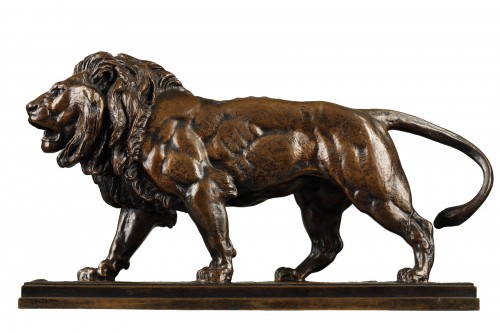 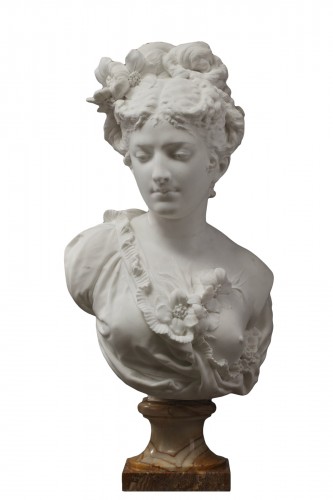 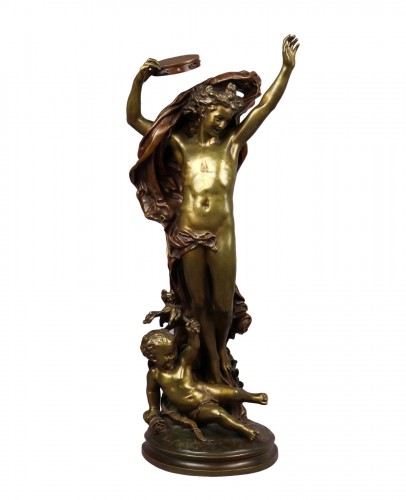 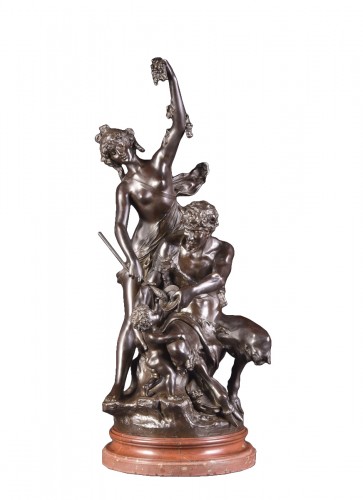 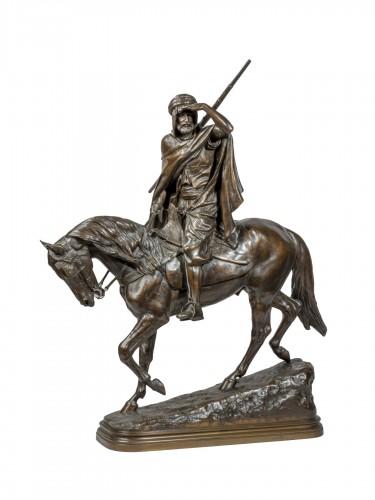