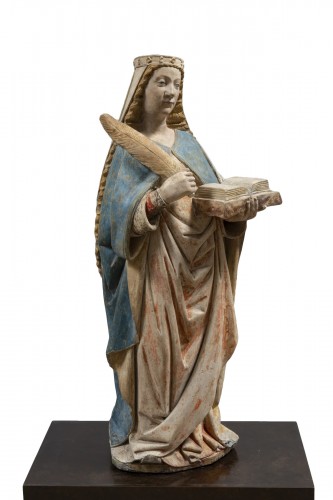 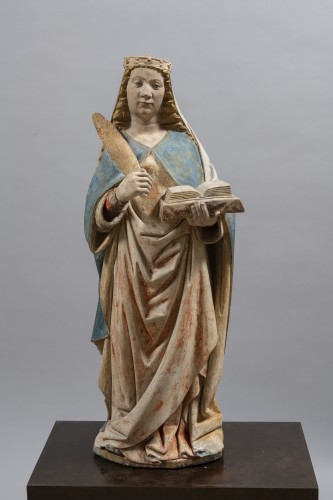 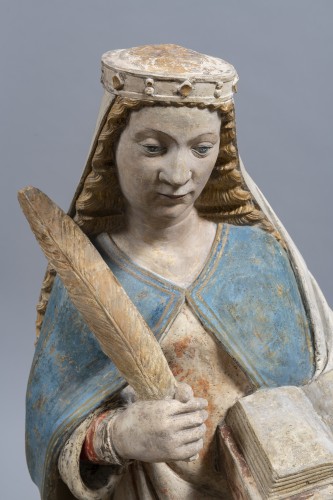 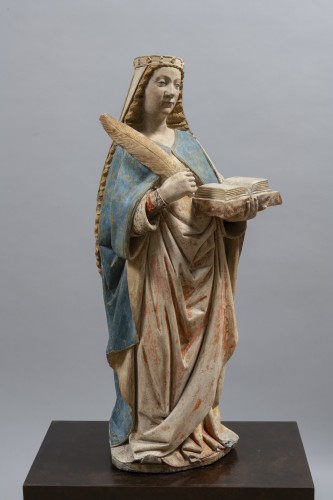 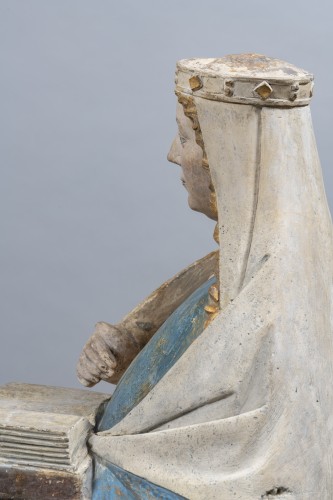 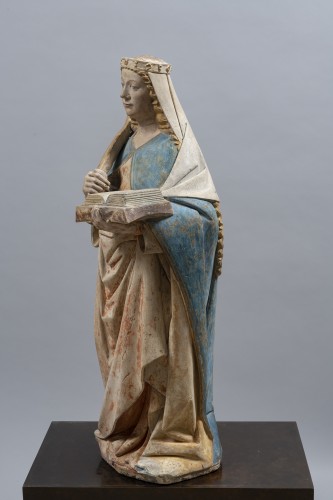 At the head of a rich and powerful territory, the Grand Dukes of Burgundy, Philippe le Hardi, Jean sans Peur, Philippe le Bon and Charles le Téméraire, implemented an ambitious artistic policy throughout the 15th century. Under their reign and thanks to their patronage, the arts experienced a dazzling period, particularly in the field of sculpture. This is strongly marked by the productions of the ducal workshop, where great names such as Jean de Marville, Claus Sluter, Claus de Werve, Jean de La Huerta or Antoine Le Moiturier have successively distinguished themselves. This Saint Barbara in Tonnerre stone presents characteristics partly due to the influence of these local ymagiers. Thus, its ample drapery with broken V-shaped interlocking folds is reminiscent of the variations executed by Jean de la Huerta and Antoine Le Moiturier on the coats of certain mourners from the tomb of John the Fearless and Margaret of Bavaria or even on the coat of the very beautiful Saint Madeleine of the Rolin museum in Autun. The latter is wearing a diadem that can be compared to that crowning the head of our Saint Barbara. The sobriety of the posture of our saint as well as her powerful face, marked by a strong nose with wide wings and a pinched mouth with thin lips, exuding a serene tranquility, echo the Virgin and Child attributed to the workshop of Claus de Werve kept at the Museum of Fine Arts in Dijon. We find these same characteristics later on sculptures again attached to the production of Jean de la Huerta, as on the Virgin and Child of the Cathedral of Dole or on a group representing Saint Anne Trinitarian today preserved in a private collection. On the latter, it is worth highlighting the closeness between the faces of Mary and our saint, as well as the very atypical way of sculpting the hair in a carpet of wavy locks applied to the two sculptures. Beyond these anchor points in the genealogy of the great Burgundian ymagiers of the 15th century, the elegance of our piece, its precious linear character as well as its eyes with swollen and doubly underlined eyelids, invite us to bring it closer to the great chefs- of Auxois works from the second half of the 15th century, such as the famous Virgin of the Saint-Philibert de Trouhaut church, summarizing all these qualities. 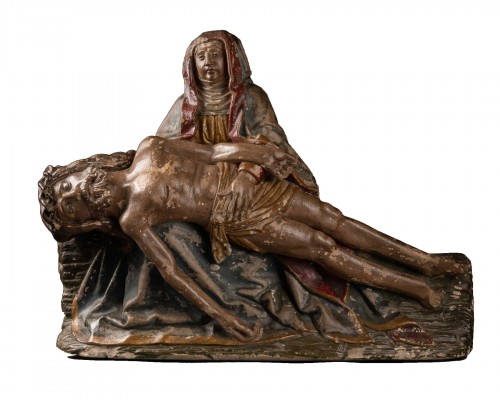