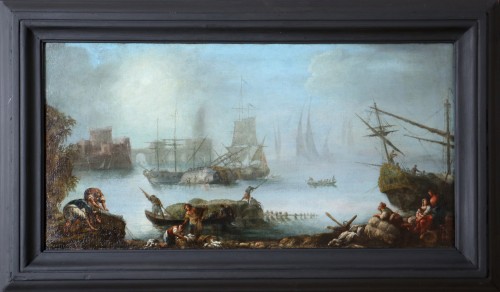 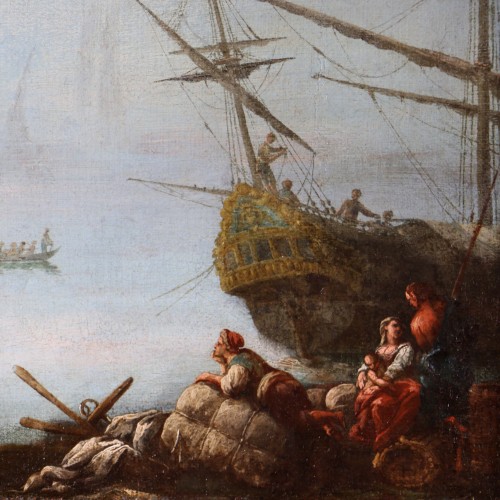 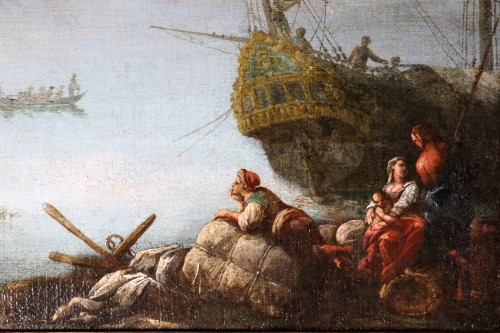 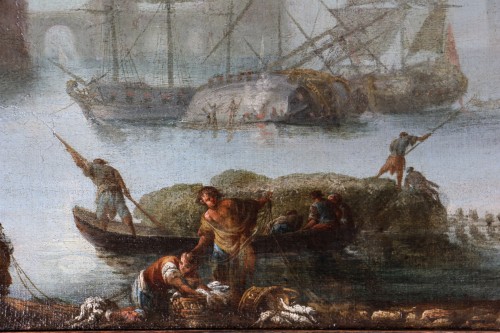 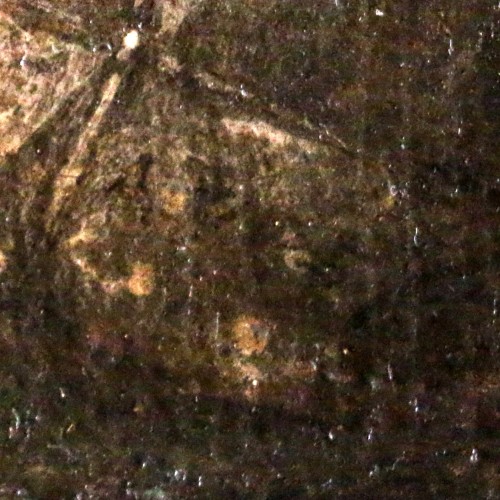 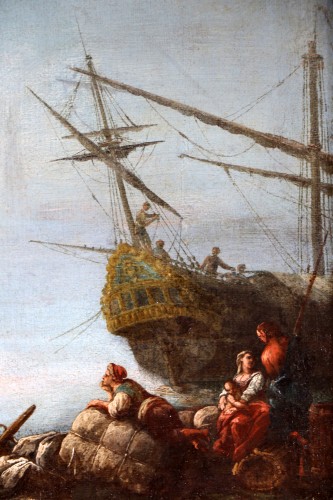 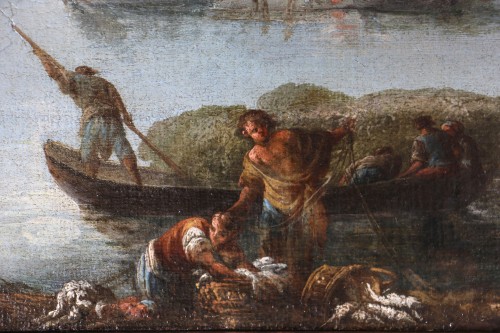 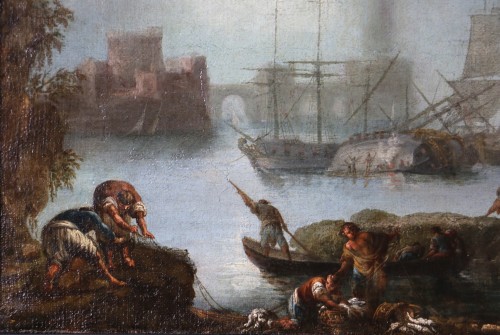 The artist offers a view imaginary of a port hanse with fishermen in the foreground and walkers going about their business, a ship is moored. In the center of the composition a shipyard and in the background a group of fortified buildings.

Adriaen van de Kabel is a Dutch painter, engraver and draftsman (the United Provinces) In the Netherlands, he begins to paint in the style of Van Ruisdael and Van Goyen, but will later influenced by the Mediterranean style. He left to live for a few years in Rome, before settling in Lyon, where he married and where he was active until his death. His name is sometimes spelled Van der Cabel, Vandercabel or Vandrecabel. . Relatively little is known regarding van der Kabel's private life; he painted a lot, but corresponded little. Nevertheless, most biographers agree that in his youth he was a lively individual. From 1645 to 1648 he was a pupil of Van Goyen in The Hague. Thereafter, he leaves to paint around, sometimes quite far from this city. His first known work, a river landscape, dates from 1648. His productivity, at this time, was quite low in comparison with his French period; however, it is possible that a number of his paintings from this period have been attributed to Van Goyen. His paintings, up to around 1660, testify to the Dutch style, following the model of Van Goyen, Van Ruisdaal and de Cuyp: the sunlight, filtered by the moist sky, casts a silver luster on the scene represented. Small villages are pleasantly ordered, The red-brown roofs of the houses, the colors of the walls, agree with the range of capricious grays of the sky. After 1654, however, van der Kabel took an interest in Mediterranean landscapes. We know of him a painting of 1656, Zuidelijk havengezicht met twee torens (Port view from the south, with two towers), which then already shows all the style that van der Kabel would later perfect in Italy. When he was about twenty-five years old, he therefore decided to leave (also) for Rome. On the way, he stopped in Lyon, where he probably stayed from 1655 to 1658. In 1659, he arrived in Rome, which he was not to leave before 1666, and where he acquired mastery of the Italian style. There, he joined the Bentvueghels armi them, he was nicknamed "Geestigheid" ("Humor"), a name that testifies to his vivacity, his sagacity and his biting spirit. After Rome, he stays and works briefly in Ais in Provence, Toulouse and Avignon. He records his travels in his sketchbook kept, until 1930, in the Cabinet des Estampes in Berlin; it is now lost. He settled in Lyon in 1668. He then produced landscapes and seascapes in which a clearly Mediterranean atmosphere emerges in colors that often lean towards brown. His work, at this time, shows influences from Caude Geléé, Casteglione and Salvator Rosa From 1670 to 1672, the painter Johannes Glauber works at his side, His reputation is built, so he works for the Advocate-General at the Court des Monnaies several paintings for the decoration of his house in Saint-Genis. He was also invited to decorate the impressive Hôtel de Pizeys. He became one of the two "Master Guards" of the painters' guild. He had several students, including his godson, Adrien Manglard It was in this city of Lyon that Adriaen van der Kabel died on January 15, 1705.