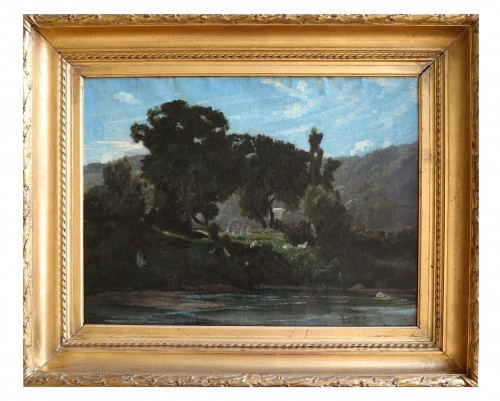 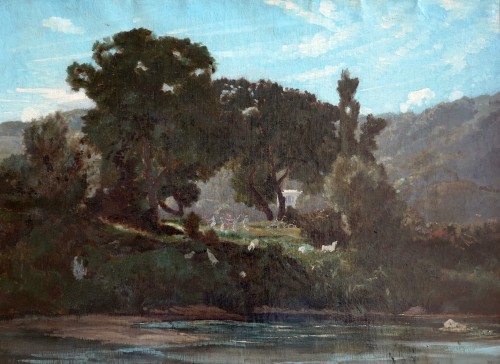 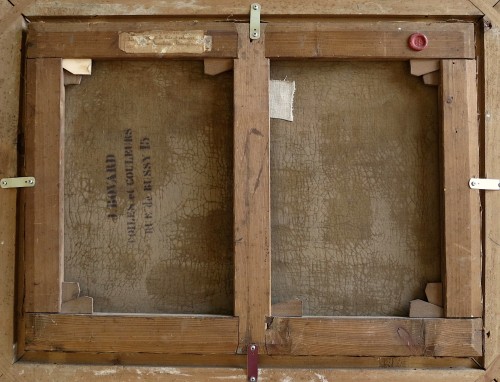 Walnut trees on the island and the Jonchère hillside in Bougival

Pupil of Delacroix, Corot and Delaroche, Anastasi worked a lot in the forest of Fontainebleau, Barbizon, and also in Normandy. He made a few trips to Belgium on the banks of the Meuse, Holland, Germany, Tyrol, Italy, from where he brought back many landscapes.
In 1870, Anastasi became completely blind and a sale of his works, organized by his comrades, produced a sufficient sum to protect him from want until his death. He was made a Chevalier of the Legion of Honor in 1868.
Some of his views of Italy are composed and painted in a classical manner, while his layout and his touch become much freer when he paints his landscapes of the banks of the Meuse, Fontainebleau, or Tyrol. He is then able in a few strokes of discreet halftones to evoke the poetry of undecided hours.

Our painting illustrates a landscape characteristic of the Barbizon school, namely in the foreground the island of the Chaussée, later called the island of La Grenouillère by the Impressionists, and in the background the hillside of the Jonchère, today forest park.
Île de la Chaussée, also Île de la Grenouillère or Île de Croissy, is an island in the Seine located in Bougival. The island was home to a microscopic beach on which the romantic landscape painters and then the impressionists thronged. Anastasi was one of the first to frequent the place in summer, attracted by the untouched nature and canoeing. He also joined forces with Louis Français, Célestin Nanteuil, Camille Corot, Gustave Courbet, Théodore Rousseau and Eugène Desjobert to acquire together a small boat called to become a workshop boat and named "La Grenouille". It is very likely that the point of view taken for our painting was from aboard La Grenouille. Note that the representation of the places that Anastasi gives us in this painting is somewhat idealized with the presence of characters draped in the antique style and dancing under the secular walnut trees of the island.