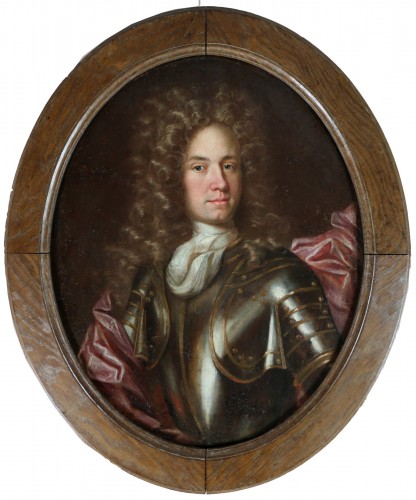 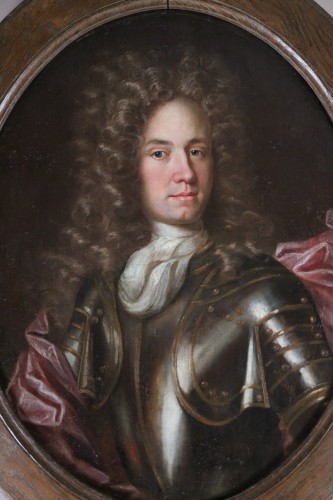 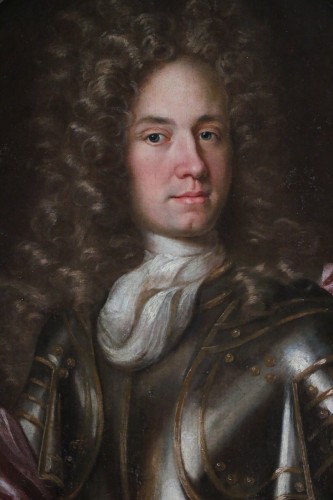 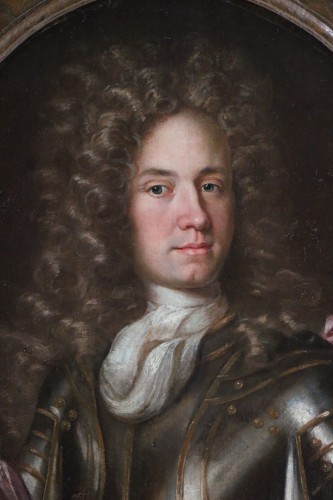 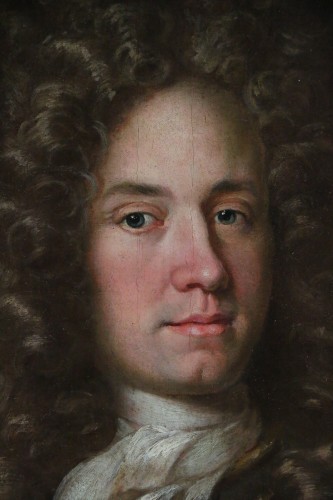 This elegant portrait of a young man in armor can be attributed to the Largillière workshop in the 1690s, we find the stylistic codes of the artist there. This young man with a very well painted face wears his armor.

Born in Paris to a hatter father, Largillière spent his youth in Antwerp, where he was a pupil of Antoine Goubau and where he was received as a master at the guild in 1672. Shortly after, he went in England, where he is protected by Peter Lely who employs him in his workshop. This dual training as a genre painter and portraitist will be found throughout his career. Badly seen as a Catholic, Largillière returned to Paris in 1682, where he was protected by a solid Flemish colony, grouped around Van der Meulen. In 1686, he was received at the Academy with a large Portrait of Le Brun (Louvre) where his main qualities already shine: capable of orchestrating in a flattering and solemn way a portrait in which he enclosed in symbolic shortcuts the whole career of his model, he simultaneously commands attention by his brilliant execution and the vigor of his psychological analysis. Most of his career is devoted to portraiture, but he was also responsible for commemorating various events in the life of Paris. He then knew how to rejuvenate the tradition of Dutch group portraits (Corps de ville délibérant... in 1687, lost; sketches in the Louvre and the Hermitage) or associate the Parisian aldermen with a celestial apparition (Ex-voto à Sainte Geneviève, 1696, Paris, church of Saint-Étienne-du-Mont). He also executed rare history paintings (Moses saved from the waters, 1728, Louvre), a few landscapes (Louvre) and still lifes, largely treated in a very simple color harmony, probably quite early in his career (Paris, Petit Palais museums of Amiens, Dunkirk and Grenoble). Portraitist, he is the author of an immense work (1500 numbers, according to his contemporaries), spread over sixty years, without it being easy to distinguish its evolution. His clientele, a little less aristocratic than that of his friend Rigaud, was recruited mainly from parliamentarians, financiers and other big bourgeois.