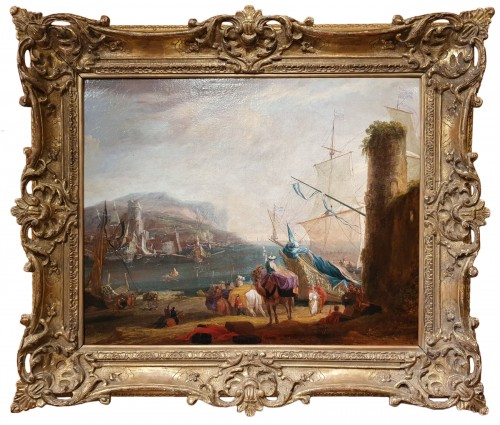 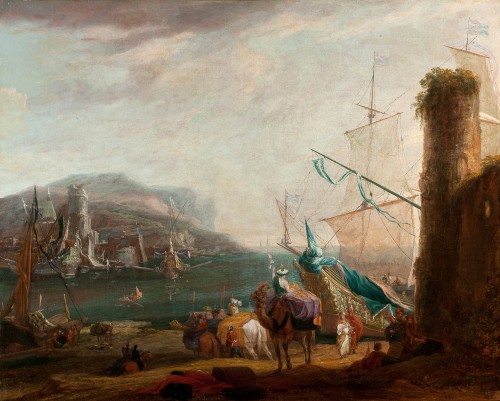 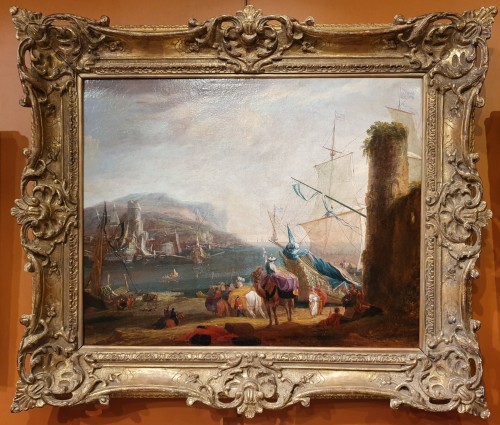 The foreground of this Mediterranean harbour scene is occupied by a quay on the edge of which has just docked a galleon whose castle is adorned with a sculpture. A caravan of dromedary and horses loaded with stuffs, accompanied by turbaned merchants, heads to the left of the picture occupied by dry boats.
On the other side is a city with ramparts, a fortified castle and a three-storey building at the foot of which are stationed imposing galleons.

The light is deep shadows that cause a great tranquility. The sunset at the vanishing point accentuates the heat of the end of the day as well as the softness of the landscape. Tranquility and poetic dimension of the landscape are the two characteristic elements of this painting.

Hendrik van Minderhout
Although born in Rotterdam, van Minderhout did not work in Holland, but in the south of the Netherlands. In 1652 he is in Bruges. Although the formation of Hendrik van Minderhout is not well known, it seems that from 1653 and for some time he settled in Rome and worked with Claude Lorrain (1600-1682) the leader of the classic landscape painting.
Then from 1662 to 1672 he is active again in the city of Bruges and until his death he will work in Antwerp.

"Harbor Scene to the Rising Sun" dated 1634 preserved at the Hermitage in St. Petersburg could serve as inspiration for this painting.
105 x 89 cm with the frame