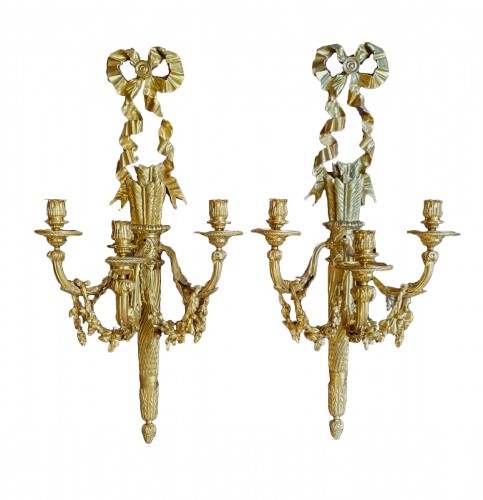 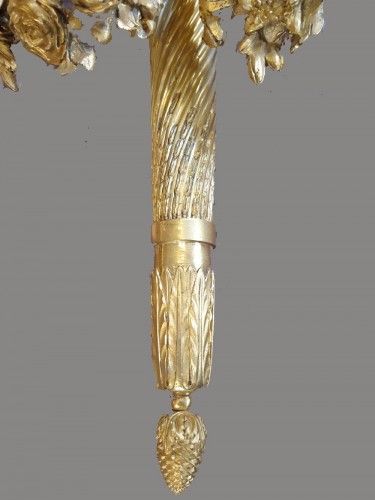 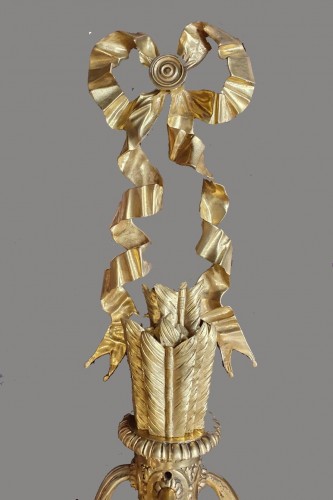 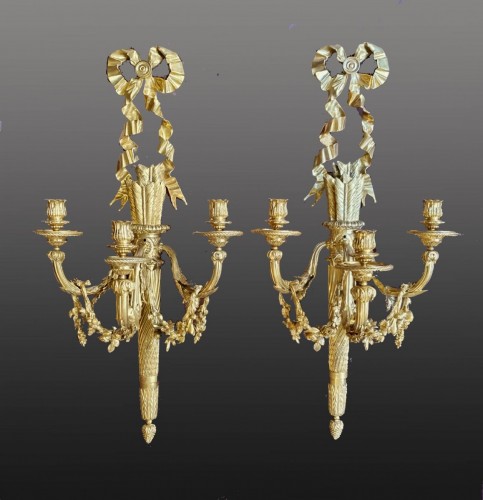 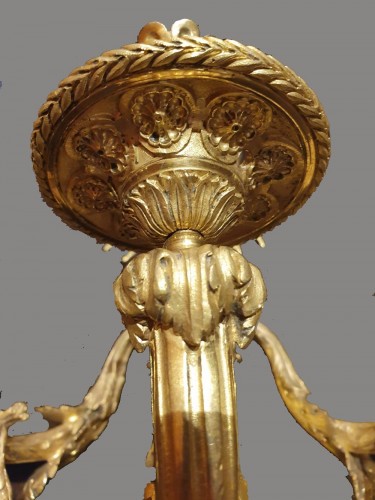 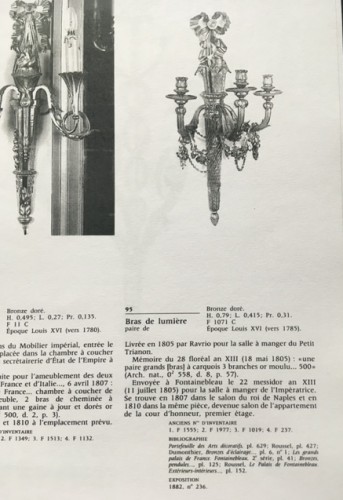 These appliques are composed of a quiver with twisted flutes filled with arrows surmounted by a knot of ribbons and finished with a base with a pattern of acanthus leaves and a seed. From the quiver leave three arms linked by a fall of flowers.

André-Antoine Ravrio, one of the greatest French bronziers of the late 18th century and early 19th century period
In addition to his bronze work, he wrote and published two volumes of poetry and had three of his plays performed at the Théâtre du Vaudeville in Paris. He came from a very interesting and well connected background which must have come in handy during his career. His maternal grandfather was the eminent cabinetmaker François Vandercruse whose son (Ravrio's uncle) was Roger Vandercruse, dit Lacroix. In addition, Ravrio's mother was the sister-in-law of the royal cabinetmaker, Jean-Henri Riesener. After attending a good school, Ravrio joined the Academy. He then trained as a founder with his father André, whose family had been a founder since 1661. In 1774, the great bronzier Pierre-Philippe Thomire personally recommended Ravrio to the Count d'Artois. Three years later, he was accepted as a master founder and then joined Jean Baptiste Disnematin-Dorat, a Parisian gilder-silverer. In 1790 Ravrio married the daughter of Disnematin-Dorat; his stepfather then sold him his stock, which Ravrio quickly enlarged. Like Claude Galle, Ravrio sells bronzes other than his own and in turn supplies the greatest cabinetmakers, notably Georges Jacob, his uncle, Riesener and Guillaume Beneman.

Although Ravrio enjoyed success during the reign of Louis XVI, like Thomire, he gained much greater fame under Napoleon Bonaparte. He participated in the first Exposition of Industry in Paris in 1803, then won a silver medal in 1806. The same year, he provided many bronze furniture for the apartments of the Empress Joséphine at the Tuileries and in 1810 is appointed bronzier to the Emperor.

As such, he supplied some of the finest bronze pieces in the Empire, including fine carved clock cases, girandoles and candelabras to many imperial residences in the Tuileries, Fontainebleau, Saint-Cloud, Versailles, Compiègne and Rambouillet. Ravrio also worked for the Quirinal of Rome, Monte-Cavallo, for Stupinigi near Turin, King Louis of Holland and many other notable personalities and places.

In order to meet demand, Ravrio employs more than a hundred artisans. He lived in great luxury, in a large house full of artwork and furniture as well as a large library of classical literature (which he often referred to when seeking artistic inspiration.

A portrait of him by his cousin, Henri-François Riesener (1812; Louvre Museum, Paris) shows a prosperous and well-educated man, seated with books, bronzes and an open sketchbook. Unfortunately, none of his three children survived, although he had an adopted son, Louis-Stanislas Lenoir-Ravrio (1784-1846) who became his partner in 1811 and continued the business after his death. It is assumed that he died of mercury poisoning, especially since he left 3,000 francs to anyone who could protect artisans from the effects of mercury gilding. The prize was won three years later by the founder and chemist Darcet. Ravrio's bronzes are considered among the most beautiful of their kind. Examples can be seen among the finest collections, including the palaces mentioned above as well as the Stedelijk Museum Lakenhal, the Upper Belvedere Vienna, the Massena Nice Museum and the Residenz, Munich. 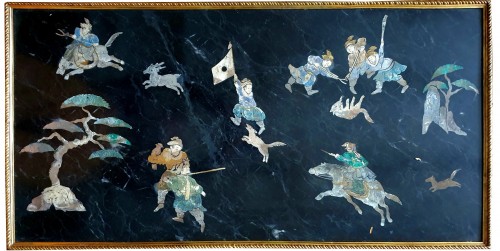 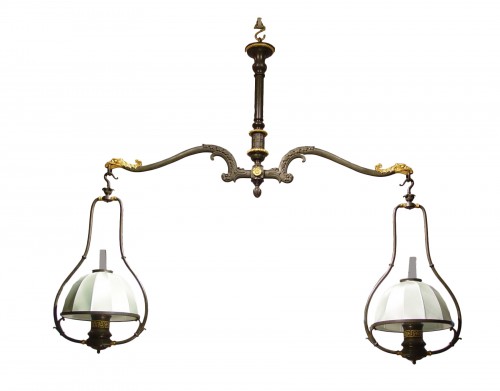 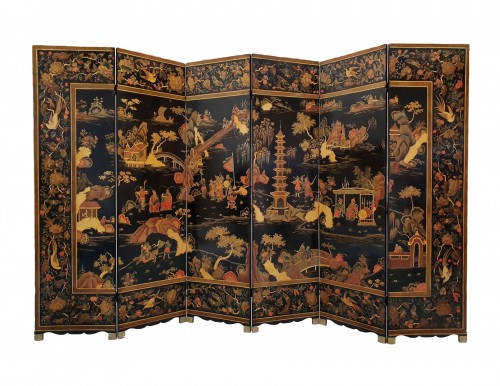 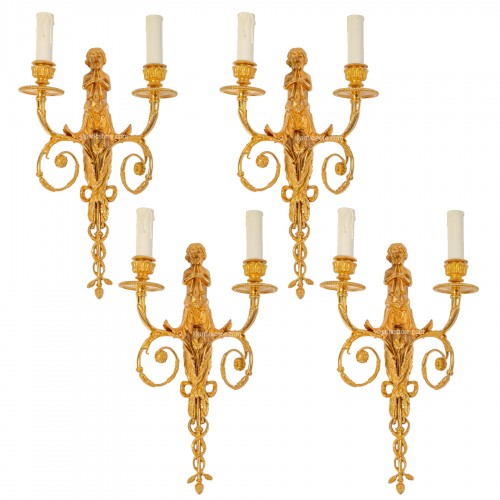 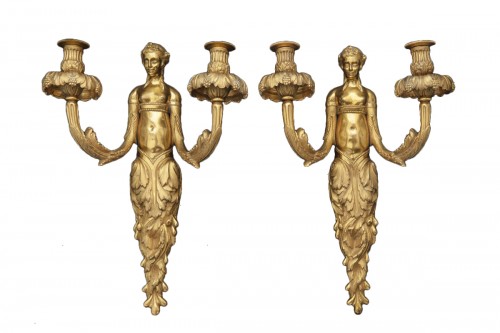 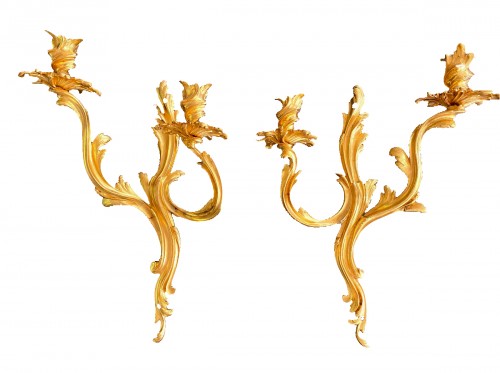 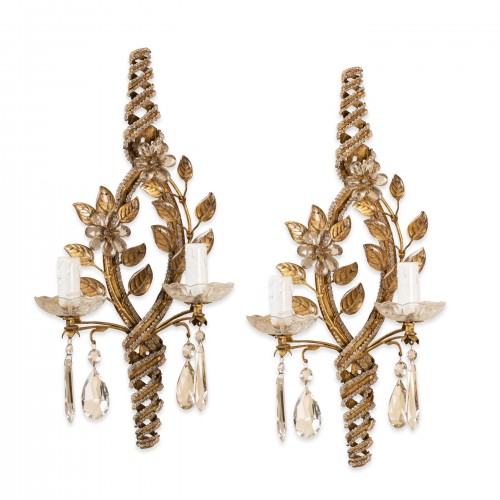