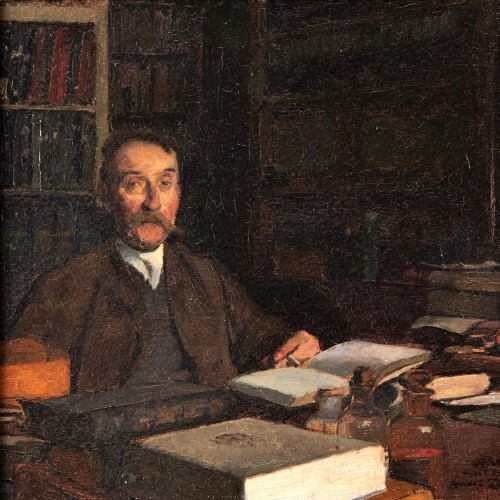 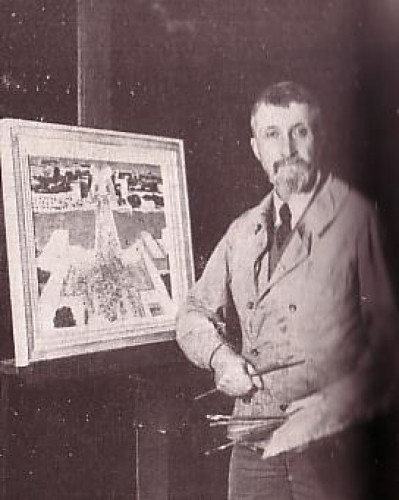 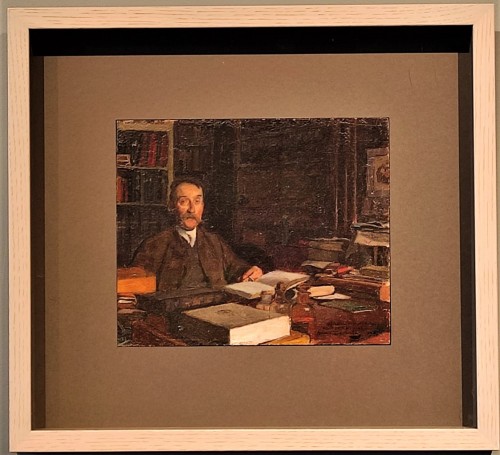 A very nice and personal portait of Doctor Pignol, dedicated by the artist and dated 1927. Doctor Pignol was the head of "les hopitaux de Paris" and the Doctor who treated André Devambez after he got injured in the first World War. During this war, Pignol was Chief Medical Officer of a Military Hospital in Corbeil. Because of his war injuries, Devambez was no longer capable to stand up for a longer time and thus work on larger scale paintings as of 1915. This is an example of how Devambez continued to create impactful paintings, whilst working on a small scale.

Signature lower right
Dedicated by the artist to Doctor Pignol
Dated: 1927
Presented in a modern frame

André Devambez was born in 1867 in Paris. His father Edouard started out as an engraver and then founded the Devambez publishing house, which became very famous at the end of the 19th century. André quickly showed a talent for drawing while working with his father. Wanting to be an artist, he trained at the École des Beaux-Arts in Paris and then with Benjamin Constant at the Académie Julian, which he had founded a few years earlier.

Devambez was attracted by modern subjects characteristic of the fads of his time, such as aviation, the metro, the cinematograph and the great Parisian theatres, but he was also interested in history and dream worlds. He composed many works by choosing plunging perspectives where, sometimes, the characters appear in multitudes scattered in his settings. The influence of comics, aerial photography and cinema can be seen in these works. One of the most famous examples of his original views is La Charge, which is kept in the Musée d'Orsay. Devambez spent four years at the Villa Medici after winning the Prix de Rome in 1890. His growing reputation gave him access to official commissions. In 1911, he was made a Knight of the Legion of Honour. He participated as an illustrator in press titles such as Le Rire or L'Illustration and produced numerous drawings to illustrate, often with great fantasy, short stories and children's books.

André Devambez was 47 years old when he was mobilised in 1914. He worked for various magazines, including l'Illustration, for which he left for the Picardy front in December. In January, he enlisted as a volunteer. André Devambez was seriously injured by multiple shrapnel wounds in June 1915. He was repatriated to the rear and treated for almost a year at the Hôpital de la Pitié in Paris. His wounds affected him greatly and left him with significant after-effects, preventing him, for example, from standing for long.

Afterwards, the war remained a source of inspiration for André Devambez. His injuries forced him to focus on small paintings, but recovering his abilities in the 1920s, he produced a monumental triptych entitled La Pensée aux absents in which he highlighted the pain of women and the solitude of combatants. He continues to produce numerous drawings for art editions and to participate in magazines as an illustrator. He taught at the École des Beaux-Arts and became a member of the Institut in 1929. In 1934, the new Air Ministry appointed him official painter. In the following years, he became a member of the jury of the Société des Artistes Français. In 1942, he died of cancer.