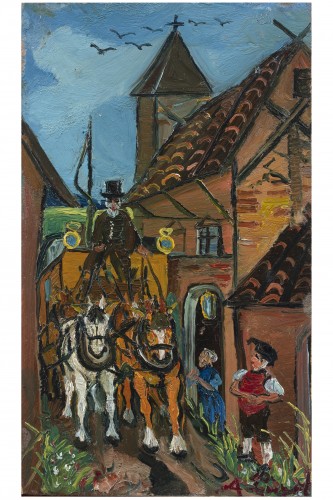 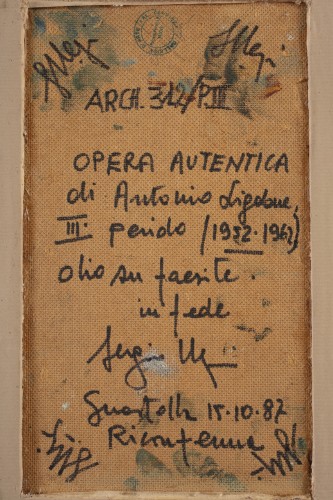 Oil painting on hardboard by Antonio Ligabue representing a horse-drawn carriage with landscape and figures.

The table is published in the general catalog Electa edited by Sergio Negri on p. 239 Tav. 151 with erroneous measurements. The exact measurements are: 31.7 x 18.7

The work is accompanied by the expertise of Sergio Negri.

Provenance from the Albertoni-Guastalla collection.

It sounds like a story with a happy ending, that of an artist who with his creative flair manages to overcome the limits imposed by a difficult childhood; yet there is one detail that perhaps reveals a different ending.

This is a detail hidden in a sentence: "Dam un bes (Give me a kiss)". A request that Antonio Ligabue repeated to all the women he met, so much so that the Nomads wrote us a song. A phrase that hid a need for true love that even success, money and talent could not overcome.

1. The Italian painter and sculptor Antonio Ligabue (Zurich, 1899 - Gualtieri 1965) is considered one of the main representatives of naive art in Italy.

2. Although Italian, Ligabue was born beyond the Alps, in Switzerland. His mother was called Elisabetta Costa while his father's name was not known, so he was entered in the register under the name of Antonio Costa.

Subsequently, his mother married Bonfiglio Laccabue who recognized him as a son, giving him his surname which, however, the artist, having reached adulthood, decided to change to "Ligabue".


3. Three surnames, two fathers and a very poor family. To say that little Antonio had a difficult childhood would be an understatement. His mother was so poor that, from an early age, the little boy was entrusted to a Swiss German couple.

This child, however, was strange, imbued with a stubborn silence that often resulted in severe nervous breakdowns. Unable to manage the behavior of young Ligabue, the couple who had placed him in foster care decided to hand him over to an institution.

4. In addition to these mental problems, the young Ligabue also presented serious physical deformities, probably due to the lack of food in the first years of life. This irreparably compromised his development, causing him diseases such as rickets and goiter.

6. At the age of twenty he was expelled from Switzerland and went to live in Gualtieri, a town in the province of Reggio Emilia, the homeland of his adoptive father.

He was not very talkative, he had difficulty expressing himself in a mixture of Italian and German, but he had a natural talent for drawing. He made his living as a worker on the Po, sometimes he drew pictures on billboards for small circus companies.

7. He would probably have remained one of the many potential provincial artists, defined as "eccentric" by his fellow villagers, if he had not met the sculptor and painter Renato Marino Mazzacurati in 1927, who immediately felt his talent. and began to teach him painting techniques.

8. Instinctive, wild, mad: Antonio Ligabue knew how to transport his demons to the canvas, creating powerful works with an immediate visual impact. Often they were animals at the first moment to pounce on their prey, sometimes they fought.

Another frequent theme in the artist's poetics is that of the self-portrait, which is striking by the depth of the gaze with which Ligabue represents himself.


9. Besides being a painter, Antonio Ligabue was also a very good sculptor. He created his works with Po clay, which he chewed to make it malleable.

Unfortunately, the first works were lost, because the artist was not used to subjecting them to the firing process which would have made them more resistant. Today, bronze casts have been obtained from several of his works, to preserve them over time.

10. 1961 was the year of success, with a major solo exhibition at Galerie La Barcaccia in Rome which conquered critics, artists and journalists and made him known to the international public.

The following year, however, he suffered from severe paresis. However, this did not stop him from painting until his death in 1965. 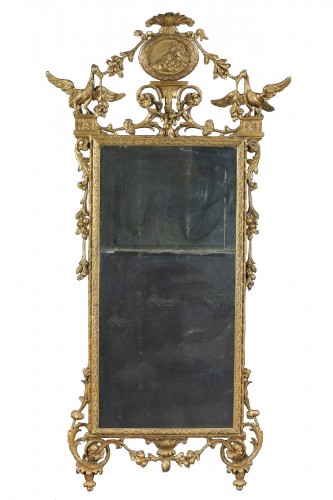 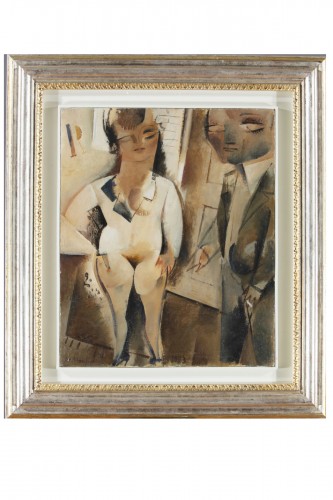