Study of the Head of a Man

Christiaan van Geelen was born in Utrecht in 1794 as the son of Christiaan van Geelen I (1755–1824).1 He was taught by his after and at the Utrecht drawing academy. He was also a member of the artists’ society Kunstliefde. Van Geelen painted portraits and genre pieces. In 1818 Van Geelen exhibited a painting of children dancing by torch light and another of a young man drawing at the exhibition of living painters in Amsterdam.2 At later exhibitions in 1820 and 1822 he exhibited works representing an artist in his studio and a view of the fish market at Utrecht. Among his pupils are Margaretha Cornelia Boellaard, Cornelis Willem Hoevenaar, Willem Pieter Hoevenaar and Theodoor Soeterik.

Van Geelen’s drawings were valued as works of art in his own lifetime: at the aforementioned exhibition of living artists in 1820 he exhibited for instance ‘an image of a sleeping woman, drawn with red and black chalk’.3 In addition to our head study, only two other drawings by Van Geelen are currently known, both preserved in the Rijksprentenkabinet of the Rijksmuseum, Amsterdam: a study of a woman with a bucket (fig.)4 and a sheet with three studies of a male nude holding a sword.5

Christiaan’s premature death is particularly regrettable as his few extant works reveal a greatly talented and original artist. In this powerful drawing, Van Geelen shows an awareness of the works of Rembrandt, not only in his choice of subject, almost a ‘tronie’ as favoured by Rembrandt and his school, but also in his choice of drawing materials, red and black chalk, a combination likewise employed by Rembrandt in some of his greatest early drawings. 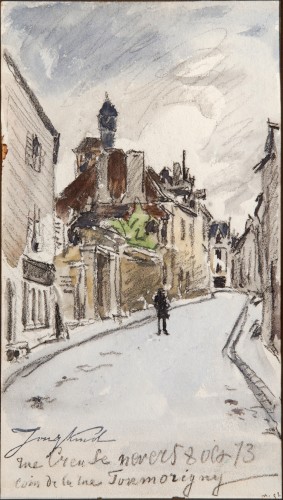