The transitory effects of light on landscape and seascape captured by Johan Barthold Jongkind, especially in watercolour, strongly affected French painters like Eugène Boudin and Claude Monet and also influenced a younger generation that included Paul Signac.1 As a young man Jongkind studied in The Hague at the Academie voor Beeldende Kunsten with Andreas Schelfhout, then its director. In 1848, at the age of twenty-seven he settled in Paris, where he studied under Eugène Isabey. His encounter there with the works of Richard Parker Bonington and Camille Corot led him to strive for the same atmospheric transperency in his own paintings and watercolours.

In France Jongkind became associated with painters of the Barbizon school, but he also often worked in the vicinity of Le Havre and spent part of each year in his native Holland. With his companion, Joséphine Fesser, whom he met in 1860, he travelled throughout Southern France and the Côte d’Azur in 1880, making watercolour sketches. In 1878 Jongkind took an apartment and studio in the home of Mme Fesser’s son Jules in La Côte-Saint-André near Grenoble in the Isère. He died there in 1891.

Jongkind is rightly considered a groundbreaking influence for Impressionist painters. He exhibited at the first Salon des Refusés in 1863. Jongkind served as a mentor to Alfred Sisley, Eugène Boudin and the young Monet. Paul Signac called him a ‘génial précursor’ of Impressionism and wrote an early biography of him in 1927, Edouard Manet described him as ‘the father of modern landscape painting’ and Claude Monet credited the ‘definitive education’ of his artistic eye to Jongkind. Writers and critcs Emile Zola and Charles Baudelaire praised the artist.

In this superb sketchbook watercolour Jongkind shows himself to be innovating and fresh even at the age of sixty-one. The artist concentrated fully on the cloud formations, filling most of the sheet. The horizon is formed by an angular mass of rooftops and distant mountains, only broken by the narrow windmill or tower. The restless handling of the black chalk and the loosely applied blue wash shows the artist at the height of his skill, and the angularity recalls the work of Cézanne. The delineation of the clouds can for instance be compared to a watercolour in the Metropolitan Museum, New York, which dates from 1870 and is more traditional in composition than our more ‘modern’ sheet (see fig.).2

Boudin wrote about Jongkind’s watercolours in 1887: ‘the longer one looks at his watercolours, the more one wonder show they were made! They are made from nothing and still the elusiveness and volume of the sky and clouds are rendered with inimaginable precision.’3

This watercolour has been registered with the Comité Jongkind, Paris/The Hague, under number G02049R (recto) and G02049V (verso). 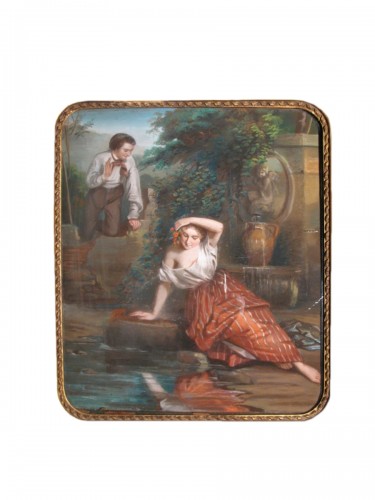