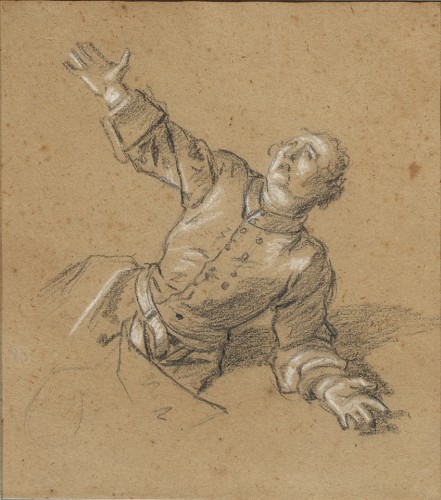 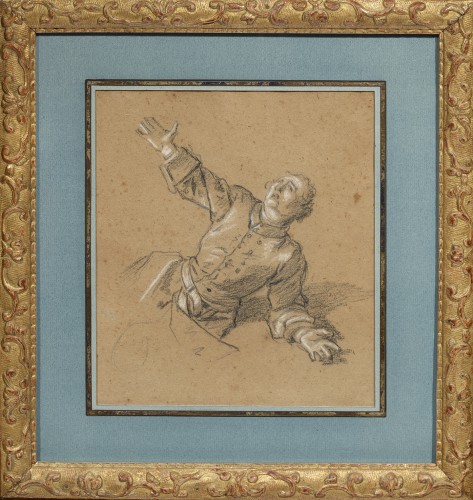 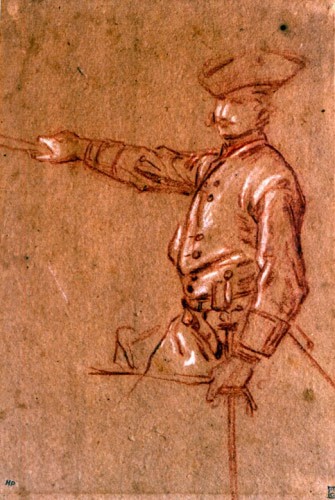 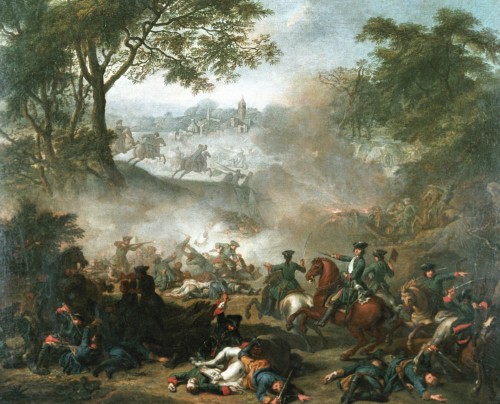 This rare drawing by Nattier is part of a set of preparatory studies executed in 1717 for one of the painter's first commissions, the painting commissioned by Tsar Peter I of Russia to celebrate his victory over the Swedes at Poltava on July, 8th 1709 ... even though our study was not retained in the final composition!

1. Peter 1st of Russia, one of Nattier's first patrons

Jean-Marc Nattier was born in Paris in 1685 into a family of artists: his father Marc was also a portraitist and his mother Marie Courtois was a miniaturist, his brother Jean-Baptiste was also a painter.

Gifted with a very precocious talent, he won first prize for drawing at the Academy at the age of fifteen. Although his godfather, the painter Jean Jouvenet (1644 - 1717), gave him the opportunity to go to the French Academy in Rome, he preferred to stay in Paris and made drawings of the paintings by Rubens in the famous Luxembourg Palace gallery commissioned by Marie de Médicis. He was then admitted to the Académie in 1713 and became a full member in 1718.

In 1716, an envoy of the Russian Tsar Peter I convinced him to go to Amsterdam, while the Tsar was visiting, and then follow him to Russia. When in Holland, he painted a portrait of Peter I’s wife, the future Empress Catherine II, and a painting representing the Battle of Poltava. Nattier preferred to return to Paris than to follow the Tsar to Russia, but he did paint his portrait between May and June 1717 during the latter's visit to Paris.

Nattier then became the portraitist of the Orleans family and, from 1748 onwards, of the Court of Louis XV. He died in 1766 ill and destitute, shunned by the public after having enjoyed extraordinary success as a portraitist during his mature years.

2. The Victory of Poltava, a major painting with a rich body of preparatory studies

Peter I, better known as Peter the Great, was born on 30 May 1672 in Moscow and died on 28 January 1725 in St Petersburg. He became Tsar of Russia in 1682 and received the title of Emperor of all the Russias in 1721, at the conclusion of the Great Northern War (1700-1721) opposing Russia to the Swedish Empire of Charles XII, of which the victory of Poltava in 1709 was a decisive turning point.

Nattier's composition (now in the Pushkin Museum for Fine Arts, Moscow – Russia), painted during his stay in Amsterdam in 1717 presents an imaginary view of this battle in which the painter does not attempt to render the specificity of the place, but rather translates the confusion of the battle between the Russian army (in green uniforms) and the Swedish army (in blue uniforms).

Nattier took particular care in the preparation of this work, drawing a study for each of the soldiers involved in the battle. The drawing we are presenting is one of five known studies , the other four represent:
• a study of an officer wearing a tricorn (a preparatory sketch for the figure of the Tsar), reproduced above;
• a study of a rider (for the rider on the left of the Tsar);
• a study for the soldier wielding the bayonet rifle in the centre of the painting,
• a study for the Russian soldier lying under the white horse in the centre of the painting.
Although our drawing is unusual in that it was not used in the final composition, its execution by Nattier was recognised by Xavier Salmon , the author of the catalogue of the Versailles exhibition (where the Calvet Museum drawing was displayed).

While the Battle of Poltava is the only battle scene the painter actually painted, these studies constituted a portfolio which the painter used throughout his career to decorate the background of his military portraits.

This drawing represents a soldier on the ground, leaning on his left elbow and raising his right arm, begging for mercy. It is vigorously executed and organised around two diagonals that cross at the level of the soldier's chest: that of his arms, extended by his open hands as a sign of abandonment and despair, and that of the reverse of our soldier's jacket, extended by the arch of his nose.

While the shadow cast on the ground by the soldier adds a dramatic dimension to the scene, the few strokes of white chalk enliven the drawing and poignantly underline the character's immense vulnerability: the hands, the uncovered face with its imploring mouth, the belt that seems to have broken in his fall.

We have chosen to frame this drawing with Bérain rods dating from the first quarter of the 18th century, which were supplied to us by the Maison Lebrun. 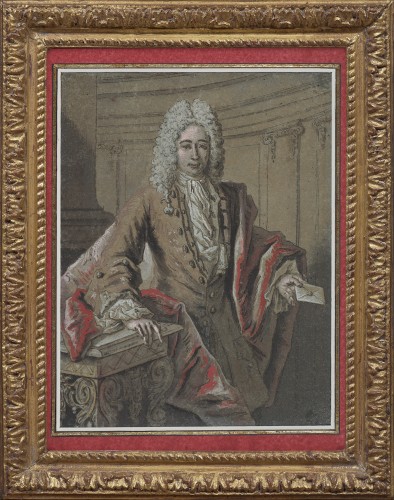