The round white enamel dial, signed “Robin/Hger du Roi”, indicates the Roman numeral hours and Arabic numeral fifteen-minute intervals by means of two pierced gilt bronze hands. The hour and half-hour striking movement is housed in a case made of white Carrara marble and finely chased gilt bronze with matte and burnished finishing. The upper portion of the clock, which is adorned with grape vines, features the figure of Cupid resting on clouds. His quiver slung around his neck as he brandishes his bow. He is about to waken the sleeping Venus. The case housing the movement is adorned with a reserve decorated with ribbon-tied branches; it is decorated with beadwork friezes. The rectangular shaped base has rounded corners and is embellished with a frieze of alternating leaves and seeds, as well as reserves featuring stems of lilies among ribbons, rectangles with grape vines and a slightly raised panel depicting putti, in the manner of the sculptor Clodion. The clock is raised upon six feet that are adorned with cord friezes.


Robert Robin (1741-1799)
Is one of the most important Parisian clockmakers of the late 18th century. Having received the titles of Valet de Chambre-Horloger Ordinaire du Roi et de la Reine in 1783 and 1786, he had an extraordinary career, distinguished himself by his exceptional contribution to the progress of time measurement during his lifetime.
In 1778 the French Académie des Sciences approved two of his inventions, one of which led to the construction of an astronomic clock representing a meridian drawn on a pyramid, which was acquired that year by the Menus Plaisirs on behalf of Louis XVI. Robin published a “Description historique et mécanique” of the clock. He constructed astronomic mantel regulators with compensation balance, which the Marquis de Courtanvaux, one of the period’s most important connoisseurs of precision horology, was among the first to acquire. During the Terreur he made decimal watches and clocks. He is recorded successively at the Grande rue du faubourg Saint-Honoré (1772), rue des Fossés-Saint-Germain l'Auxerrois (1775), rue Saint-Honoré à l'Hôtel d'Aligre (1778) and in the Galeries du Louvre in 1786. 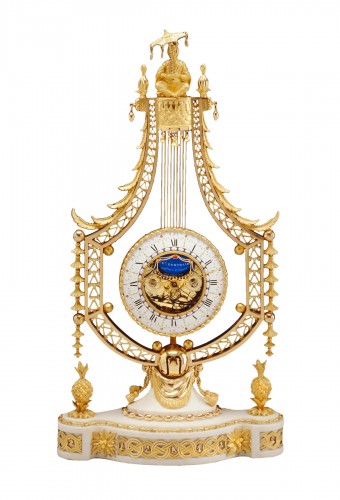