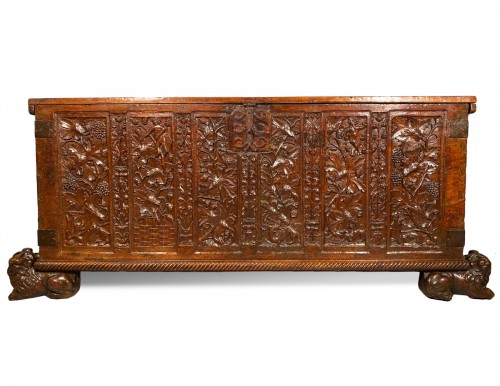 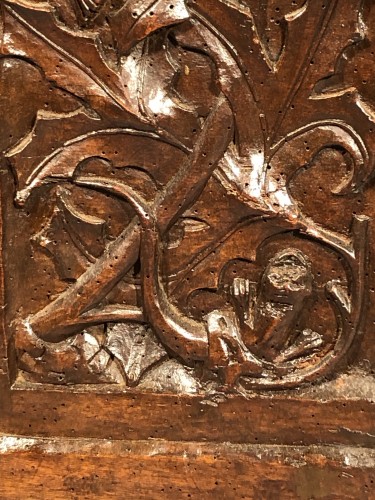 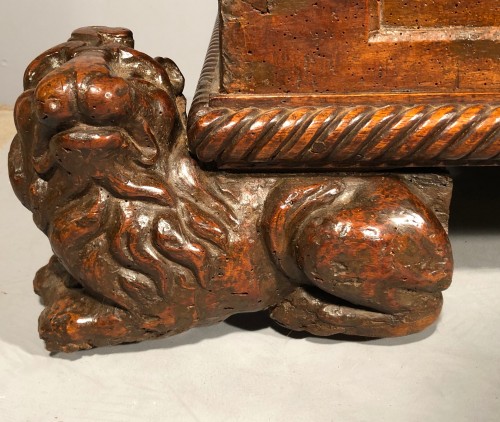 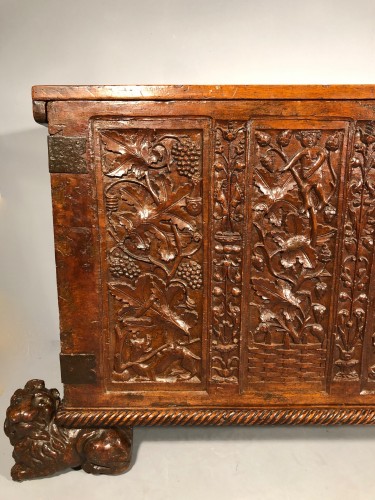 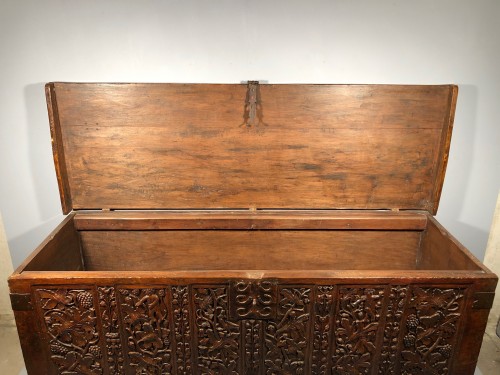 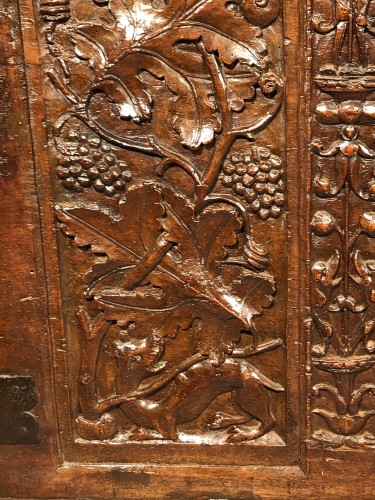 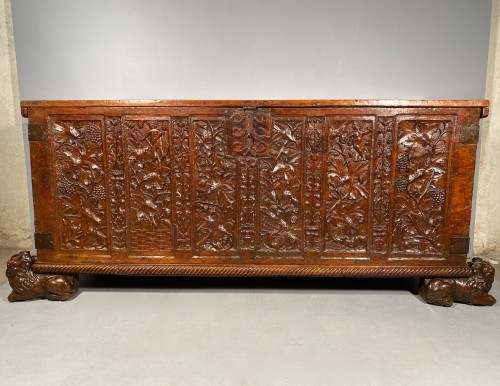 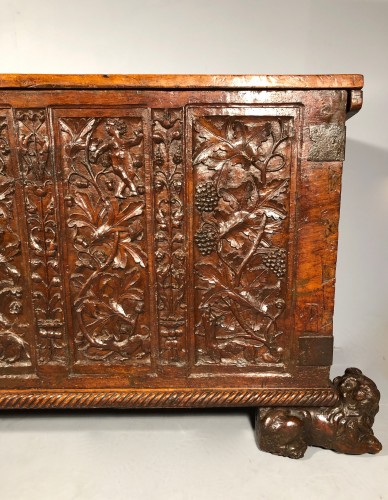 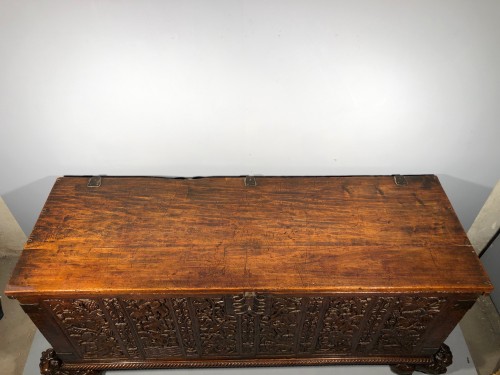 Rare and important chest in solid walnut of rectangular shape.
It rests on two lions lying on the front surmounted by a small twisted cornice.
The front, the top and the sides are made of thick sections of walnut wood interlocked with dovetails.
The front is composed of six registers carved in the mass, with alternating decorations of vines symbolizing the blood of Christ and fertility, and thistles cut and prickling symbolizing the crown of Christ and royal power.
In this vegetal tangle several creatures stand out, birds, children but especially two animals more surprising:

-At the foot of the third register of sculpture appears a salamander, emblem of King Francis I (1494-1547), used on his coat of arms with the motto "Nutrisco et Extinguo" (I feed on the good fire, I extinguish the bad).

-At the foot of registers four, five and six appears an animal with a long neck representing an ermine, a symbol used by Queen Claude of France (1499-1524).

Provenance : Collection of the antiquarian Edouard Larcade (1871-1945) at the abbey of Roseland.

The chest that we present is exceptional by its dimensions, by its perfect state of conservation and by its rich decoration; but its main interest is its ornamentation of royal symbols (Salamander and Ermine) such as one can see on the walls of the castles of the Loire Valley (Chambord, Azay-le-Rideau, Blois ...).
The absence of such symbols would have led us to date this chest to the end of the 15th century because of its decoration of cut thistles, still very Gothic.
It is obvious that our piece of furniture was conceived during the period when the king François 1er and the queen Claude were husband and wife, that is to say between 1514 and 1524.
The essence used, the technique of assembly and the lions lying down are characteristic of the Lyonnaises productions of the beginning of XVI ème.
Let us recall that the city was at that time the second capital of the kingdom where the court sat for a good part of the year and from where the expeditions for the Italian war left.
This type of large chest is generally a wedding present given just after the wedding, and it is highly probable that our chest was given to the young royal couple after their solemn entry into the city on July 12, 1515.
The consulate of Lyon organized on this occasion very important festivities to satisfy the king who was said to want to establish his court in the ancient capital of Gaul.
Although it seems quite incredible to us, we believe that we are indeed in the presence of a chest made in Lyon for King François 1er. 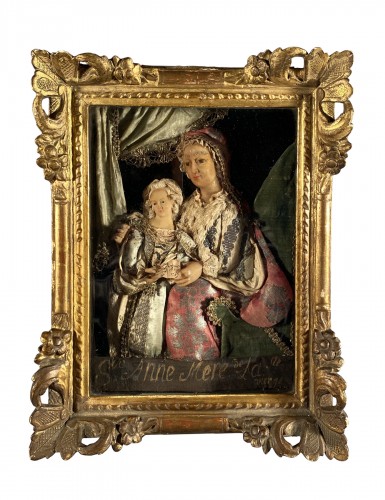 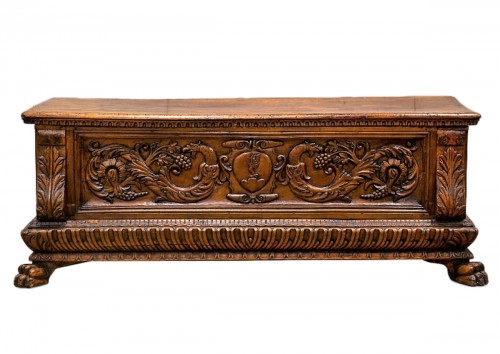 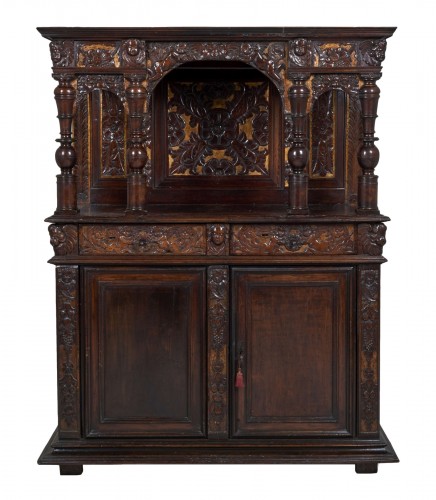 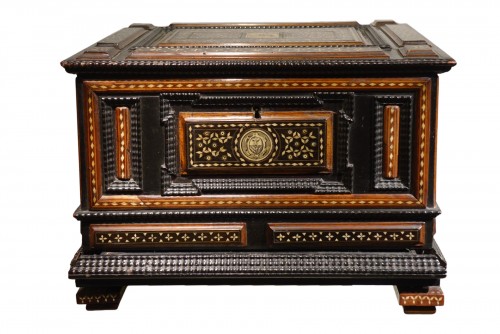 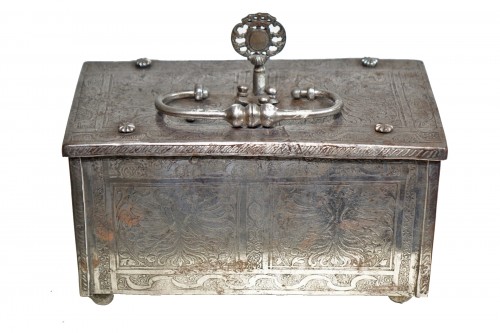