Josef HOFFMANN (1872-1956) for Jacob & Josef KOHN (Wien Austria)
"Model 397", in the J. & J. Kohn catalog in 1909 and deleted in 1916
Very slight variation of the model presented in 1908 at the Kunstschau (Vienna-Austria).
Pair of armchairs in bentwood and stained mahogany.
The seats are oval and receive a central perforation of nine squares. The backs in medallion with central decoration of an oval with geometric patterns made in marquetry.
Attributes of olives forming capitals for the front and rear feet.
Each seat marked with the stamp J. J. KOHN Wien Austria, with hot iron inside the seat belt.
Circa 1909/16
Height 86 cm - Width 60 cm - Depth 47 cm
History :
In 1908 the Kunstschau was held in Vienna, a famous exhibition that marked a decisive turning point in the Viennese Modern School and is considered today as one of the most important avant-garde art events. The exhibition was designed around Gustav Klimt and his works, including the famous painting "The Kiss", and featured works by Koloman Moser, Franz Kupka, Oskar Kokoschka, Otto Prutscher, Carl Moll, Josef Hoffmann and others. On this occasion, a suite of four armchairs was exhibited by Josef Hoffman in the smoking room of the "Kleine Landhaus für J. & J. Kohn" after a model created by the artist between 1907 and 1908. These chairs, very similar to the future no. 397 from J. &. J. Kohn, differ only by the central inlay of the medallions and the V formed above the backs. In the same "Kleine Landhaus für J. & J. Kohn" by Joseph Hoffmann, but in the dining room this time, there were four chairs, identical in every respect to our seats, except for the armrests. For the Palais Stoclet, the artist used this model of chairs in the children's room around 1910.
The firm J. & J. Kohn integrated the chair n° 397 in its catalog in 1909 but had to extract it from the 1916 catalogue, considering the commercial failure of this model, which explains its extreme rarity.
Bibliography :
Giovanni Renzi, Il mobili moderno, Gebrüder Thonet Vienna, Jacob & Josef Kohn, Milano, 2008. Identical model reproduced on page 219. 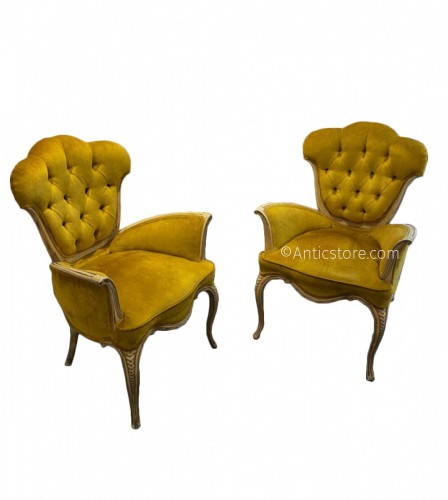