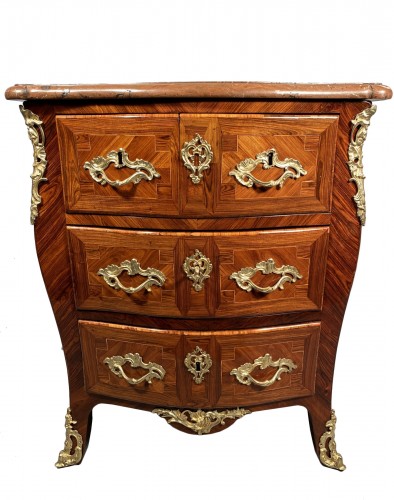 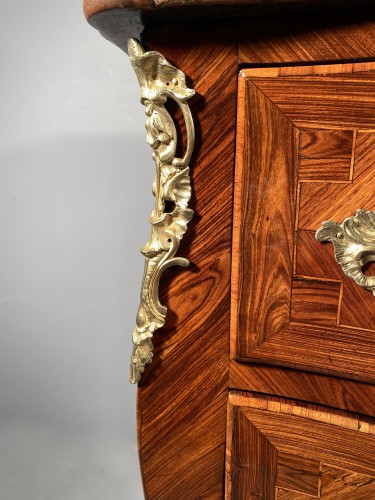 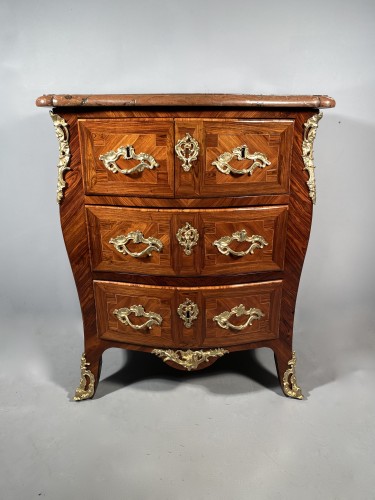 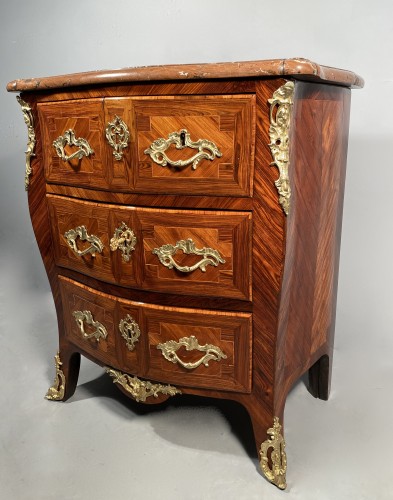 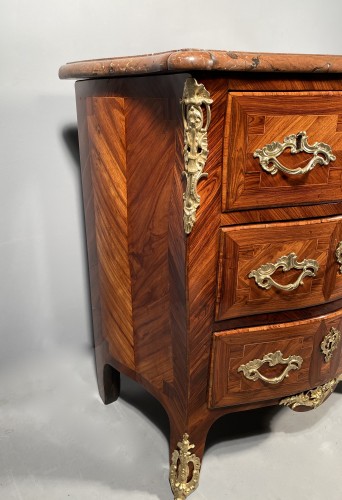 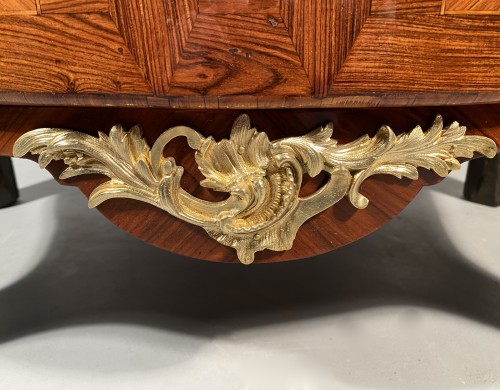 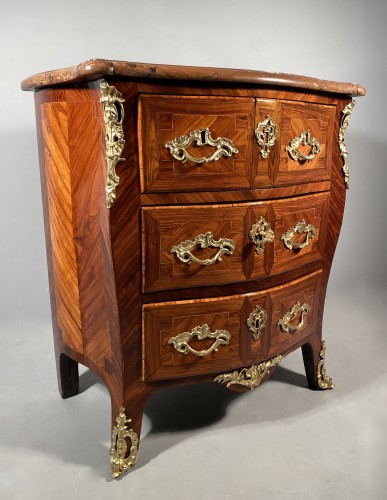 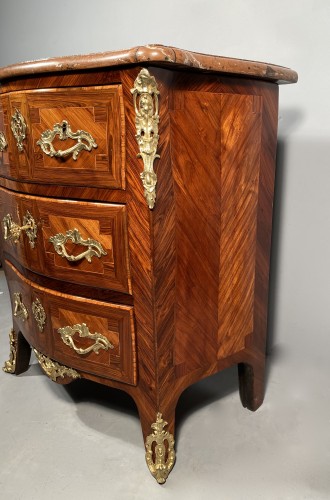 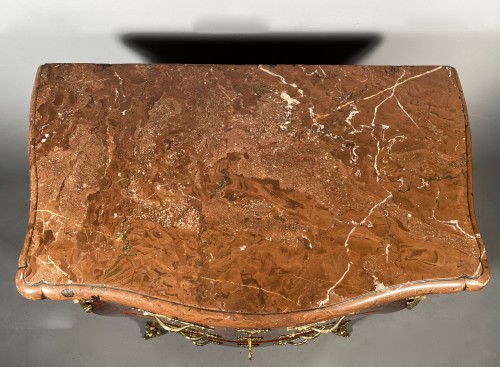 Rare chest of drawers in rosewood veneer opening with four drawers in three rows, including two small asymmetrical drawers simulating a large drawer on the first row.
Beautiful model curved in front and on the sides, with uprights with "S" brackets.
The drawers adorned with reserves in "cross" in rosewood veneer.

Very good condition, varnished with a buffer by our workshop.


* The stamp of Paul P. Charpentier, a very little-known furniture carpenter, was found on four Louis XV style chairs, indicated by the Count de Salverte and a queen's chair of ample proportions, in wood carved with flowers and de feuillages, sold in Paris to the Hotel Georges V on June 23, 1976.

The chest of drawers we are presenting dates from the decade 1740-1750.
Indeed, several elements such as the shape, with brackets still characteristic of the regency, the monochrome decorative effects of the rosewood veneer used in curling or the ornamentation of asymmetrical rockery bronzes allow us to place it at the beginning of the reign of Louis XV.
The stamp affixed corresponds perfectly to this period, that is to say between the promulgation of the new statutes of the corporation on the obligation to stamp (1743) and the constitution of the jurande (1751) which sees appearing the stamp "JME »Next to the stamp.
While the dimensions, state of conservation and brightness of the veneer are particularly pleasant, the main asset of our chest of drawers in our eyes is its rich bronze ornamentation.
Usually this type of small chest of drawers comes without a handle or at best with pull buttons, but for our "order" furniture, the client took care to have high-quality custom-made bronzes made, which required significant resources. , between the design of the terracotta, the mold….
It is obvious that this operation cannot be envisaged without the participation of an important cabinetmaker or haberdasher.
Carpenter who stamped the two uprights of our chest of drawers is probably only a subcontractor author only of the frame, and given the nature of the bronzes and the general shape, we can compare this charming in-between chest of drawers of Mathieu Criaerd's production. 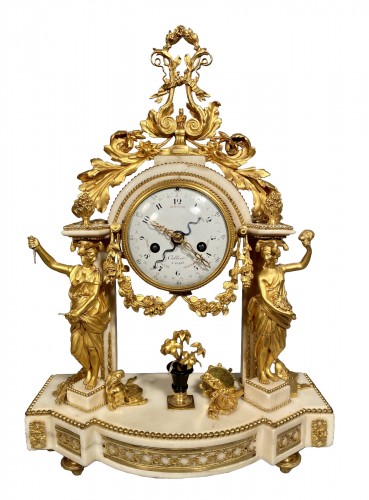 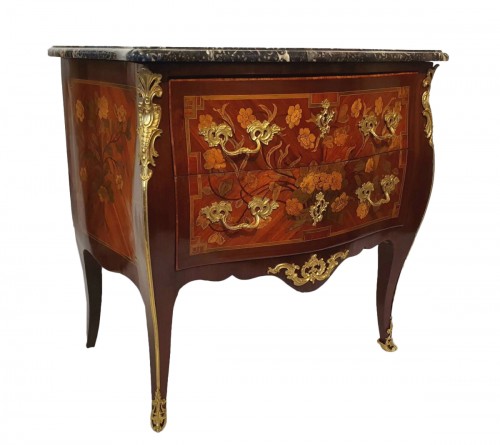 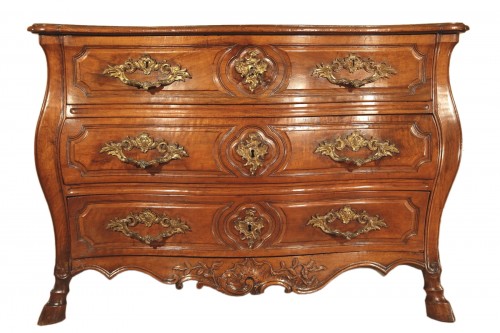 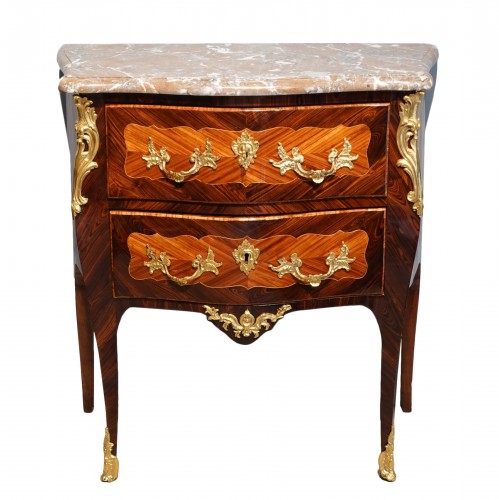 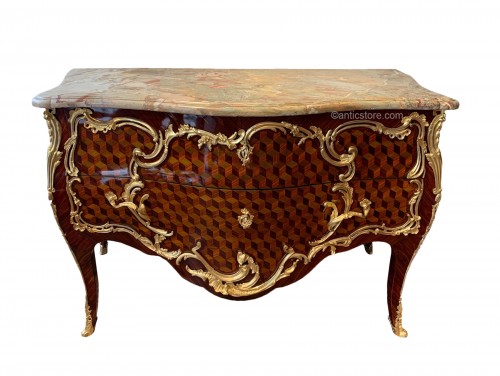 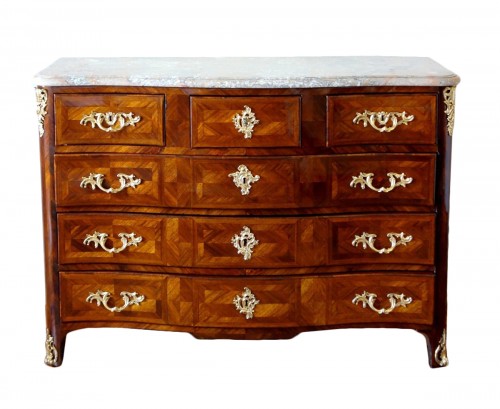