A Pair of "Gu" -shaped porcelain beaker vases in Famille verte enamels decorated with landscape reserves on the central node and scenes of flowers and birds on a dotted green background with flowers and butterflies on the lower register, Guangxu period (1875-1908).

The "Gu" form is derived from ritualistic Chinese bronze vessels from the Archaic period used for drinking wine in the Shang dynasty (circa -1500 until the end of the Zhou dynasty circa -300). Like many bronze objects from the archaic period in China, this refined and elegant form, uniformly qualified in France as the "cornet shape" (beaker in English), will serve as a model for a large number of Chinese vases in bronze, jade, lacquer, cloisonné. and porcelain from the Ming (1368-1644) and Qing (1644-1912) dynasties.

For the enamels, this pair of vases uses the famous palette "Famille verte" (French terminology of the art historian Albert Jacquemart), called in Chinese "yingcai" ("bright colors") and which was developed under the reign of the emperor Kangxi (1662-1722,) from the palette "5 colors", in Chinese "wucai", of the Ming. It should be noted, however, that this model, with reserves on a green background highlighted with black dots, was more particularly designed for the export market to the West (so-called "order" porcelain). As in all the real pairs executed in China during the imperial domination (therefore from the first emperor Qin Shi Huangdi in - 221 until 1912, end of the Chinese Empire), the decorations are carefully arranged on each vase in an inverted manner. the other: we say that the vases have "mirrored" decorations, which is the case with these beaker vases.

Under the reign of Emperor Guangxu, one of the last of the Qing dynasty, there is a strong current of revival of the most beautiful Famille verte ceramic models from the reign of Kangxi, presented as the ruler of the undisputed power of ancient China: this pair of beakers, undoubtedly made between 1880 and 1900 and remarkable for their excellent condition and the delicacy of their decoration, is therefore part of this double system of admiring reference to an archetypal Chinese form and to a family of enamels prized in China as in the West.

Paradoxically, under the reign of Guangxu, these "revivals" executed with extreme care were as much if not more intended for the Chinese domestic market than for the Export market to Europe, as their models executed in the 18th century had become rare and invaluable. 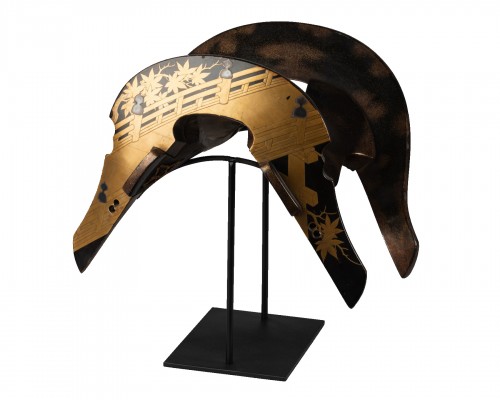