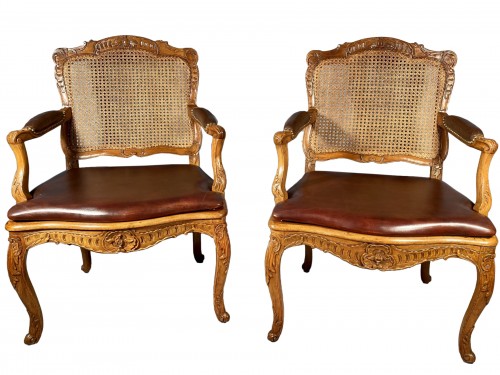 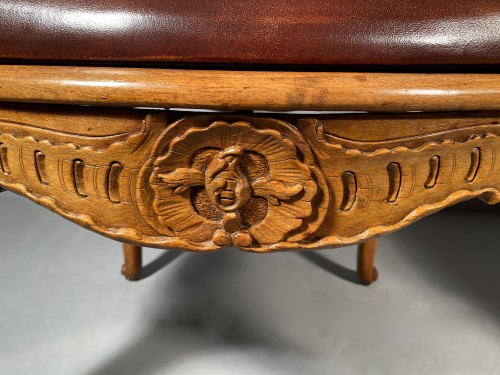 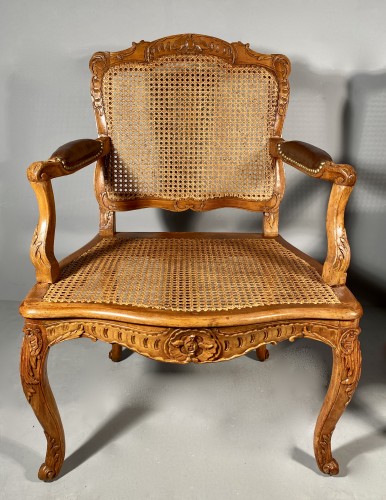 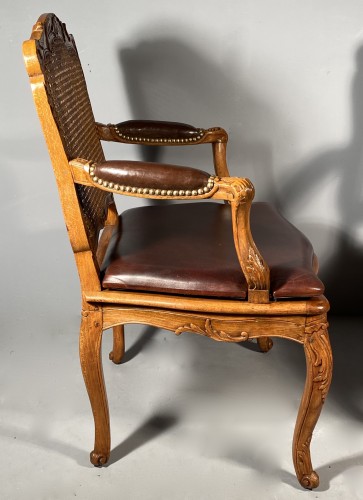 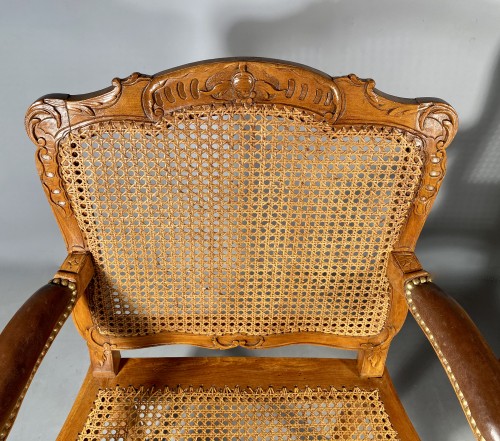 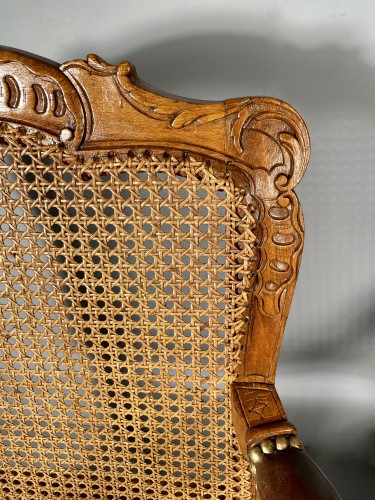 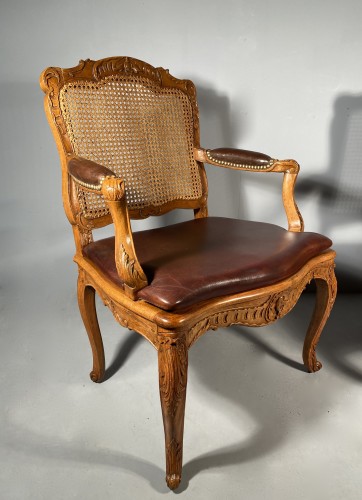 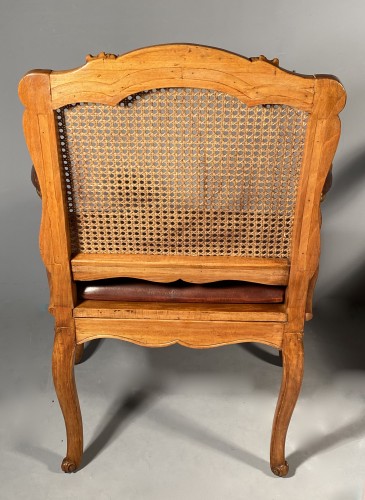 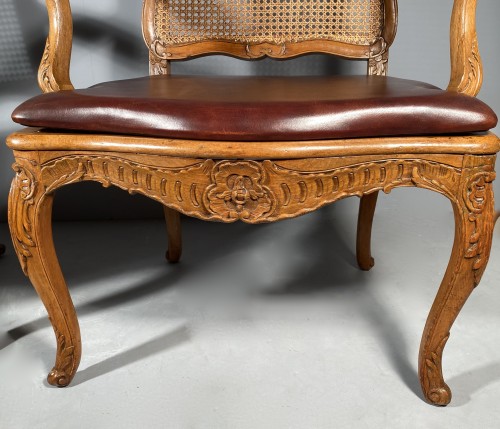 Rare pair of finely carved beechwood armchairs with flat backs.
The "ear" files consist of three rock clips edged with foliage, and acanthus "rooster crest" scraps on the uprights.
The joints of the backrest and rear legs are concealed by foliage.
The "whiplash" armrests delicately carved with shells and acanthus leaves.
The seat rests on four arched legs ending in small snail windings.
The front feet adorned with acanthus leaves perforating the wood to fall and echo the leaf that surmounts the winding.
The front cross member is adorned across its width with a rooster's crest acanthus and centered with an exploded pomegranate.
The side rails gracefully scalloped and embellished with a foliage scroll.

Caning and leather trim restored by our workshops.

Work of René Cresson dit Cresson l´affè, Paris beginning of the reign of Louis XV around 1730-1740.

Similar model on page 241 of the book "French furniture of the 18th century" by Pierre Kjellberg, former Galerie Perrin collection.


René Cresson (circa 1705-av. 1749) - siege carpenter - master's degree obtained on January 28, 1738: Born into a large family of carpenters, René Cresson is the author of only a small stamped production.
René Cresson comes from a long line of seat carpenters of this name, all members of the same family. Son of Jean Cresson, elder brother of Louis and Michel. His sister married one of his colleagues, Jean Nadal. He has a son, also a carpenter, named Nicolas Michel. He practices rue de Cléry, under the banner of "Saint-Nicolas". He left behind only a tiny number of works marked with his stamp, "Cresson l 'Elder". He made a few large queen-style armchairs decorated with pomegranates and gadrooned leaves in a softer Regency style, but also caned chairs and armchairs with similar patterns.

Our opinion :
With their winged backrests, and their still very regency rococo decorations, the armchairs that we present are typical of René Cresson's style.
The purity and the lightness of the forms combined with a fine and very precise sculpture are the main qualities which have enabled it to obtain a very great reputation.
His stamp "Cresson l´Ainé" is extremely rare because it was probably used only a few years, between the promulgation of the obligation to stamp in 1743 and his death which took place before 1749.
Like many great cabinetmakers and carpenters at the start of the reign of Louis XV, he used before that date an iron with his "RC" monogram that can be found on some very beautiful Regency style armchairs.
On this type of seat, it is extremely rare to find the original seat frames, given that they are removable and regularly removed for cane repairs.
The perfect integrity of the barrels allows us to present this pair of armchairs in an optimal way, with a sublime patina that the scholars of the Enlightenment called "hare fur" 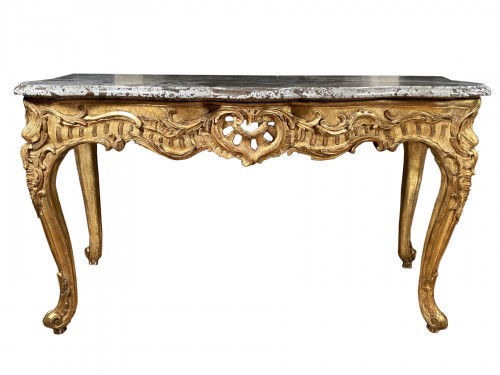 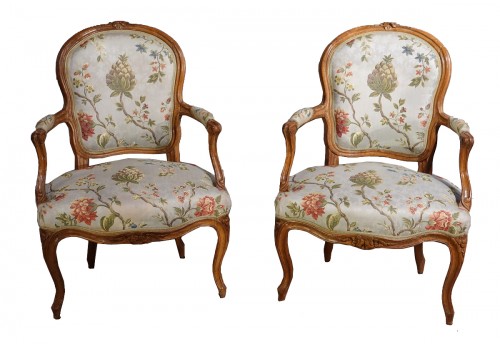 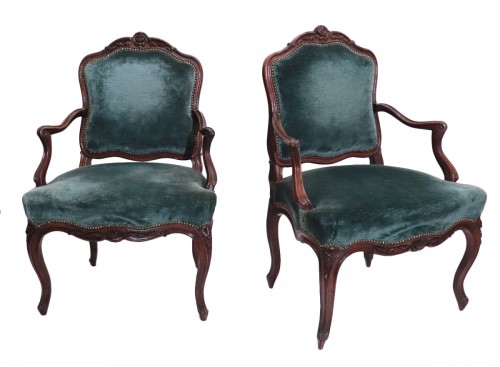 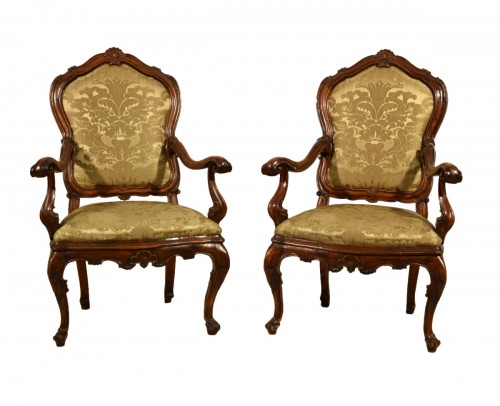 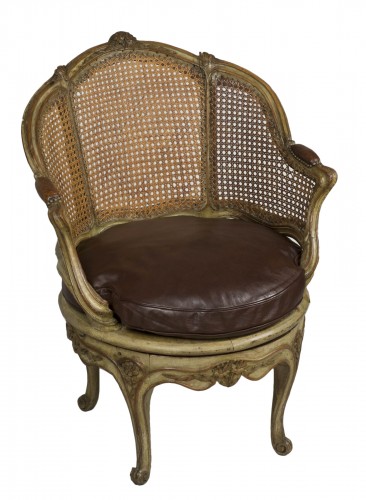 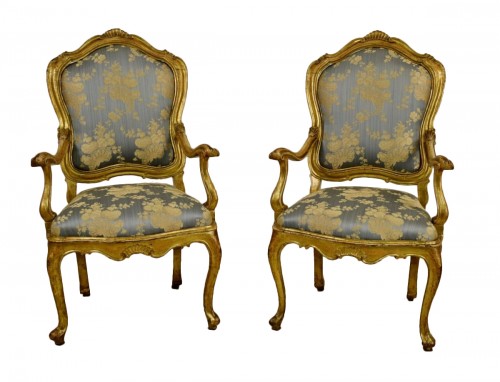 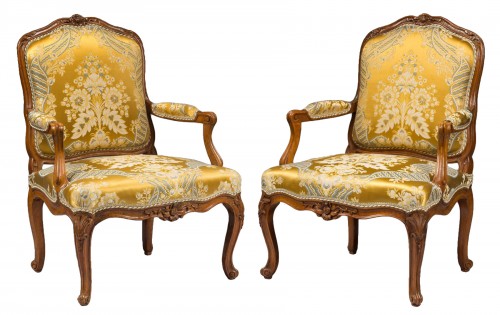