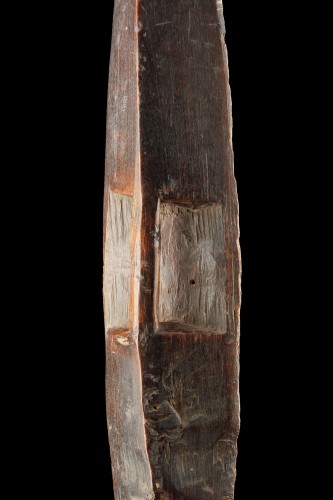 Aboriginal shields dating from the 19th century from this area are rare as by the 1850’s most of Southeastern Australia was under European control with many aboriginal groups displaced and dispossessed of their land. Early collectors displayed a definite bias towards men’s weapons carved with interesting designs and robust enough to withstand the rigours of travel and the vagaries of storage which more fragile pieces would not survive. The shields from Western Victoria were used as protection and for warding off clubs and spears in close combat. Made of a dense, dark hard wood they are stone carved with incised patterns which are enhanced by white kaolin and red ochre rubbed into the grooves. This in bright sunshine would create an effect of a flashing light before the enemy’s eyes.
These shields bearing complex designs were used only in warfare or in connection with ceremonial activities. Warfare between different groups was subjected to strict rules and ritualised clashes between opposing formations of tensed warriors, their bodies and shields glistening with colour, they enacted battles in which few were actually killed and the intention seemed to be one of ritual wounding.