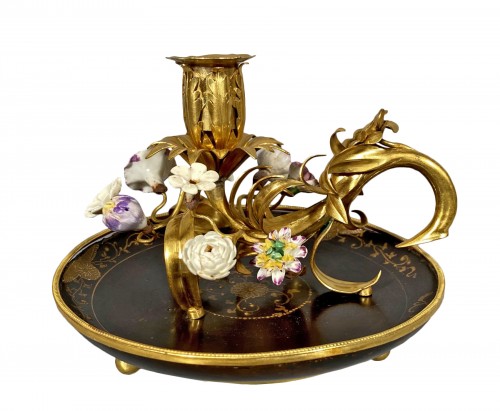 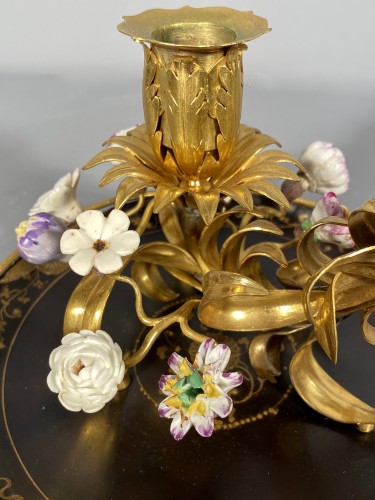 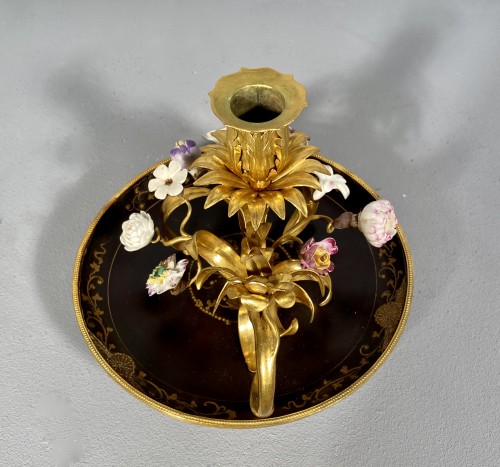 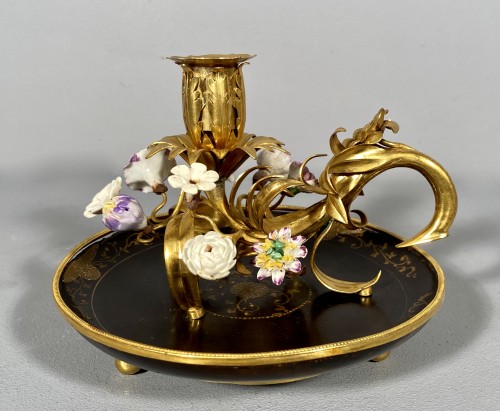 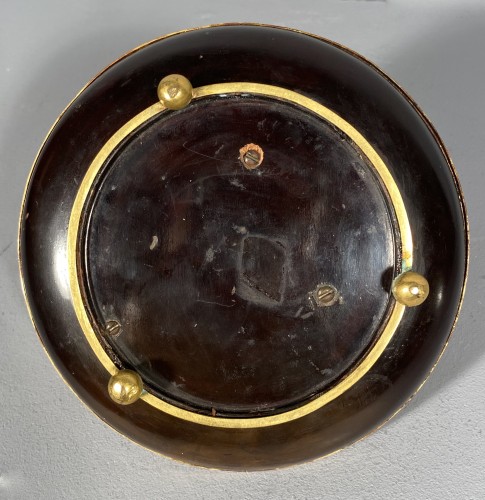 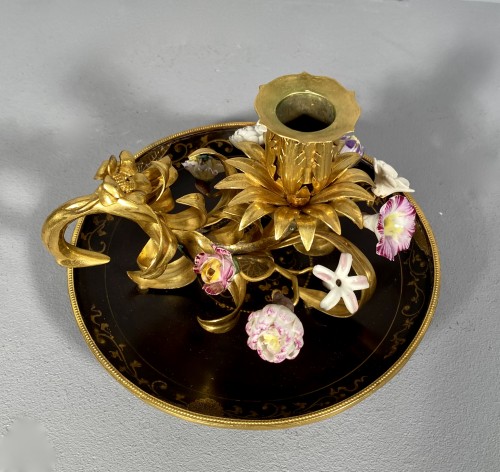 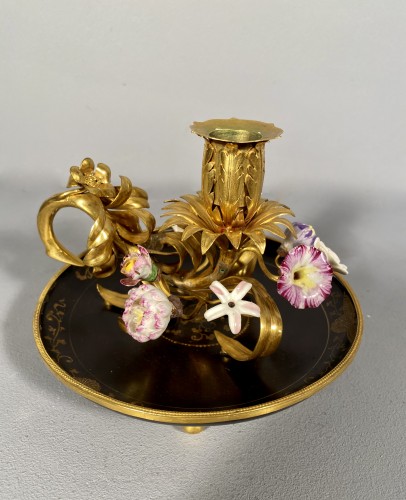 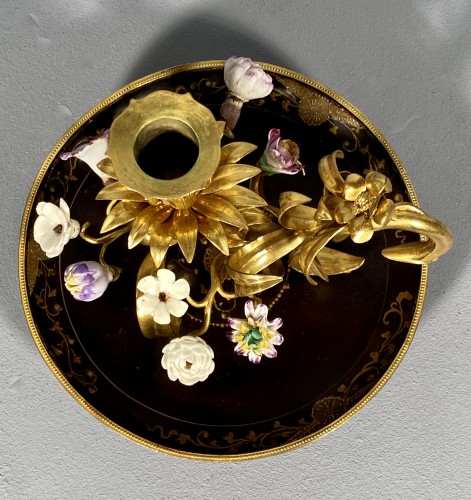 Rare lacquer toilet candle holder with a bronze frame decorated with Saxon porcelain flowers.
The black Martin varnish bowl is rimmed in bronze and rests on four rave legs.
The border is decorated in gold with a frieze of foliage.
In the middle of the bowl emerges a bronze bobèche simulating a flower while the branch-shaped winding that extends from it constitutes the grip.
From this bouquet sprang leaves of reeds in gilded brass and stems decorated with polychrome porcelain flowers from Saxony.

Collected after the war by a great Italian antique dealer in Turin.
His private collection then by descent.

This type of light, later nicknamed “basement level”, made it possible to wash before bedtime and to direct when waking up at night, it took place on dressing tables and bedside tables.
These pieces, made of rare and precious materials such as oriental lacquer and Saxony porcelain, were assembled by Parisian merchants and reserved for an elite of the nobility.
Unlike other corporations, the merchants haberdashery are "sellers of all things doing nothing" as Diderot explains so well in his encyclopedia.
They do not produce anything but assemble the different productions, some of which are imported from distant parts of Asia such as China or Japan.
Their contributions to the decorative arts under the old regime are very important because it is they who make fashion by offering original creations.
Among the five or six large haberdashery merchants of Paris, the king's jeweler Lazare Duvaux specialized in this type of object which mixes oriental lacquers (of which he is one of the biggest suppliers) and gilded bronze frames decorated with flowers in porcelain from Saxony.
His Livre-Journal mentions this type of piece, which he delivers in August 1749 to the Paris financial collector Mr Boulogne de Préninville under number 308: “A bed candlestick with a lacq tray, garnished in gilded bronze with ground gold, with the extinguisher ”or in December 1753 for Mme de la Bauve under number 1659:“ A bed candlestick, lacq tray, gilded ground gold fittings, garnished with flowers ”
The Marquise de Pompadour, who was one of Duvaux's most loyal clients, also owned a copy which is described in 1764 in her inventory after death:
under the n ° 1362: "a bed candlestick, lacquer garny with gilded bronze with ground gold, prized 15 pounds".
The book-diary tells us that during the decades 1748-1758, Lazare Duvaux only delivered a handful of these candlesticks and always for very important figures.
This type of candlestick was rare from the 18th century and very few have come down to us, especially in good condition.
Our model is perfectly representative of the "Pompadour taste" which marks the peak of the decorative arts under the reign of Louis XV.
The delicacy of the frame, the rarity of the materials and the purity of the design make this candlestick a leading decorative piece, but much more than a simple object, our torch illustrates the French art of living, with the great beginning of fashion and luxury which will help to make France shine throughout the world. 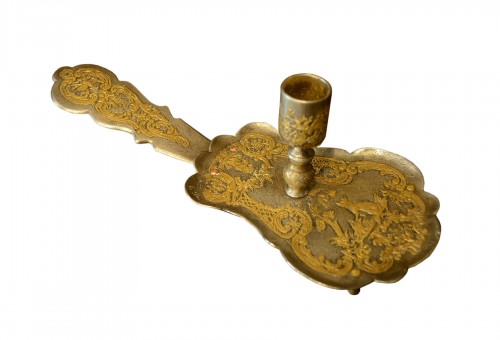 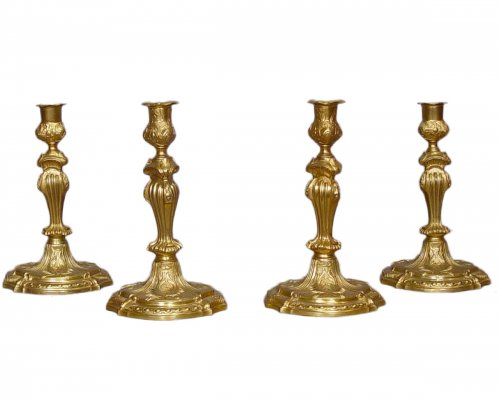 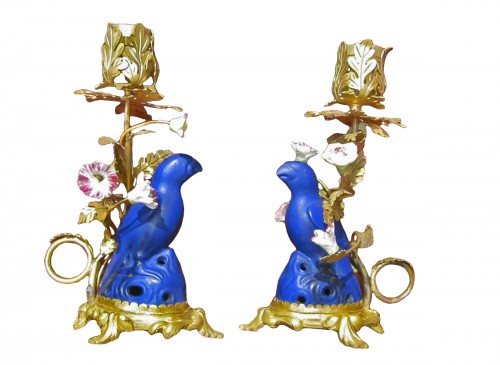 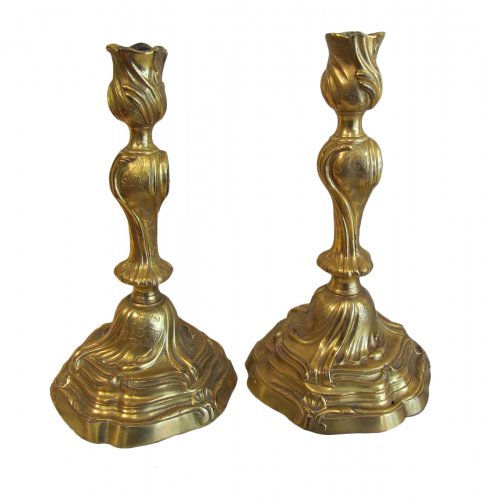