An outstanding group of Chinese nephrite jade of very pale celadon hue representing the He He Erxian brothers holding a lotus branch and a shell, 18 / 19th century, wooden base of the same period carved in the shape of ruyi louds.

The He He Erxians are legendary figures of Taoism who in ancient China symbolized marital union. Originally it would have been about two brothers Ho and He who would have become Buddhist monks to renounce the love of the same woman. They were canonized during the reign of Yongzheng (1723-1735), one as the god of Harmony and the other as the god of Good Union.

This representation of conjugal love by two men who look like twins, often represented moreover as two laughing young boys, perhaps does not at first glance fit with the symbolism of the couple as the Westerner would expect them to be from Chinese , but this choice is not hazardous in reality and could even express in a more profound way than it seems the vision that the Chinese had and perhaps still have of marriage.

There is undoubtedly a choice, if not voluntary at least unconscious in the truly Freudian sense of the term, in this principle of a double identity divinity to symbolize the conjugal union (the couple is almost twice the same, it is Ho and He), and this could be due to the conception of marriage in ancient China, namely that of a long companionship made of tolerance and compromise, ultimately based on friendship much more than on passion or physical differences between the man and woman.

It is moreover a cliché in China still today to point out that in an old happy couple, the man and the woman end up being alike and are like two old friends, a conception which is understood better when it is also put in perspective with the tradition of arranged marriages, because marriages in China are always or almost always marriages of convenience.

The brothers Erxian Ho and He thus were supposed to protect the husband and the wife in the marriage and representations of these laughing twins were offered to the future spouses during the weddings. This is undoubtedly what the present jade group, carved from a heavy block of nephrite of a beautiful very pale celadon hue with almost icy bluish reflections, was intended for.

The sculpture made in a powerful combination of straight lines and round bumps is for its part characteristic of the middle of the Qing dynasty, probably around 1800, the reign of Jiaqing (1795-1820). Natural lines and streaks stand out in the mass of the jade, elements present in the original structure of the material.

The jade being reserved at the time for the princely and mandarin elite, we can assume that the bride and groom came from two large families to receive a present of such value. The base representing ruyi clouds indicates that we are dealing with Chinese gods since their stay is heavenly. 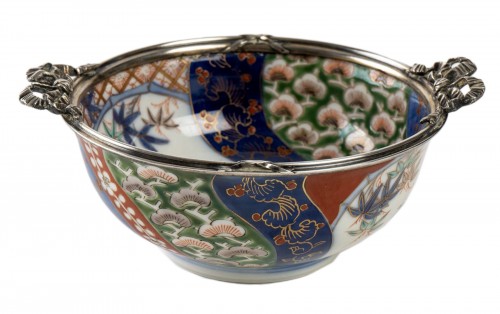 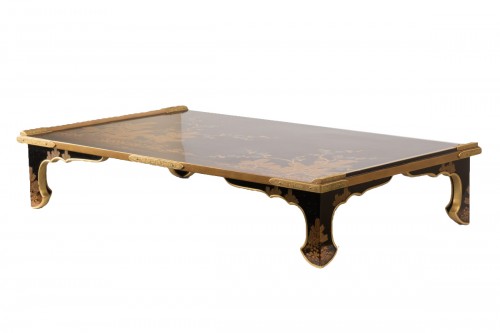 Small panel in Coromandel lacquer with a golden background