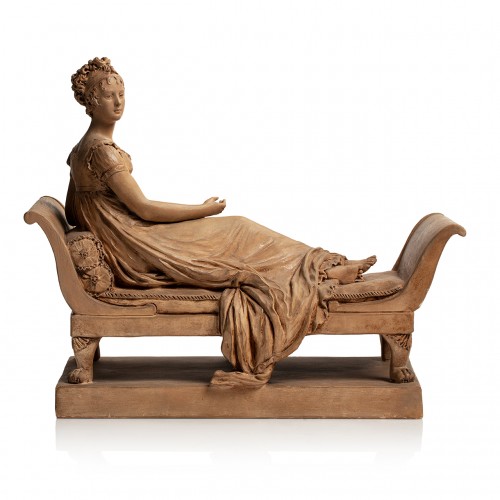 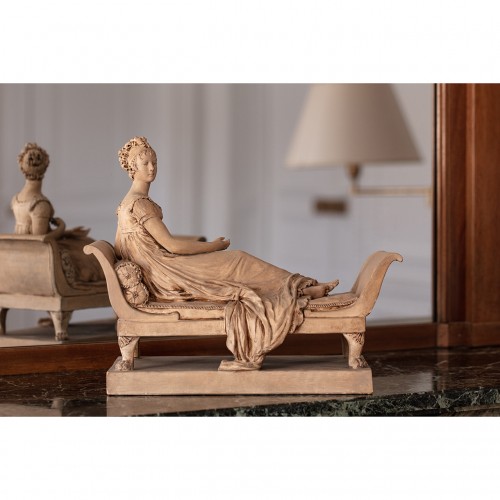 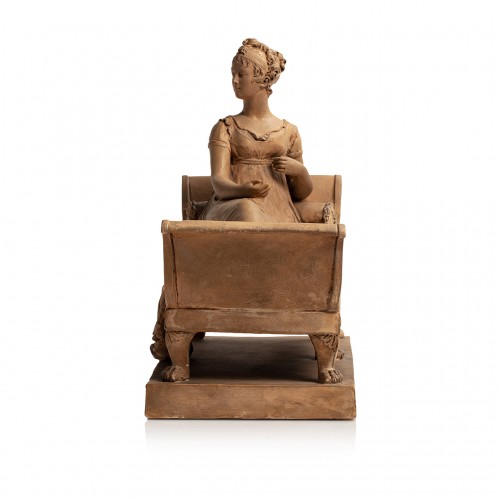 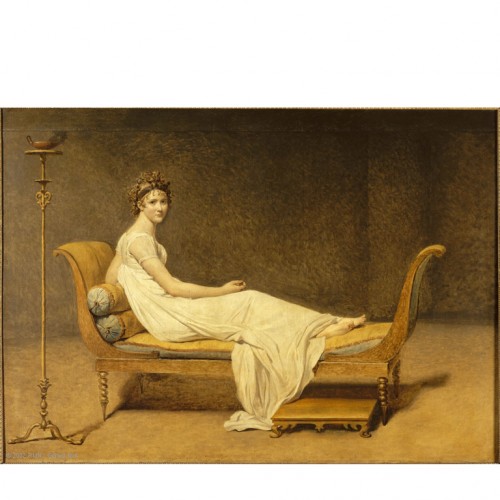 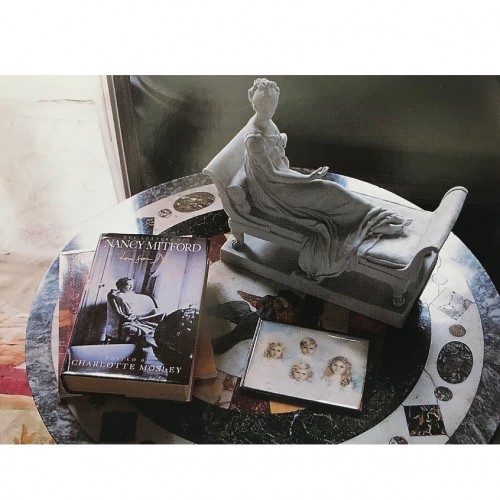 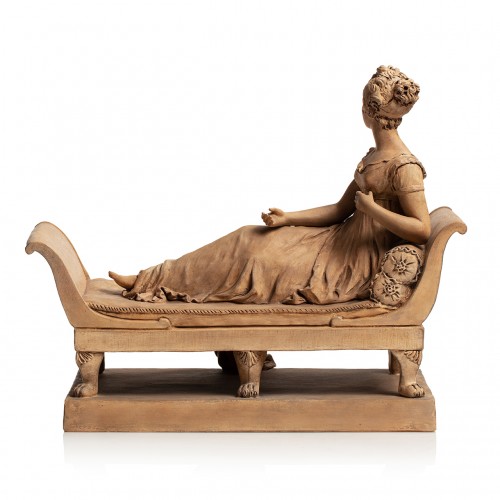 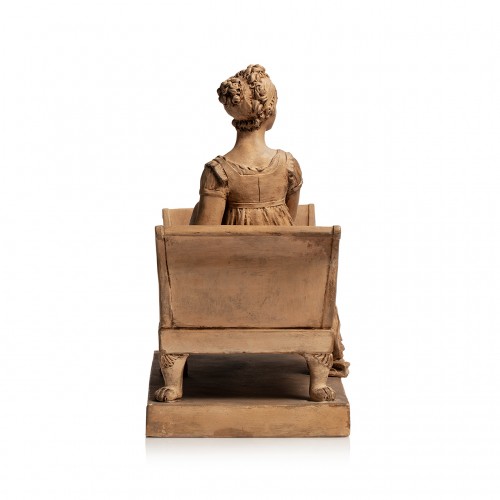 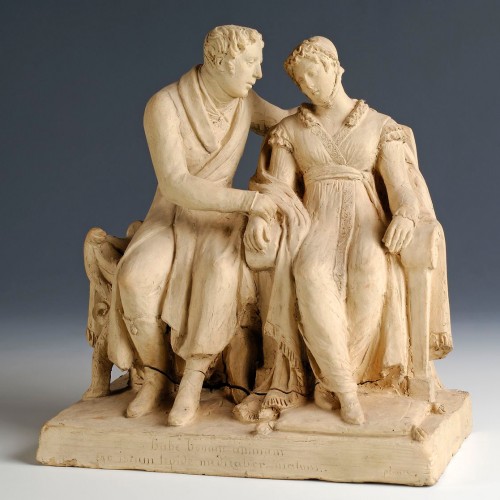 Iconography
Juliette Récamier created an image of herself as a beauty and muse that spread across Europe. She was represented by many artists of her time, such as the sculptors Joseph Chinard (1756-1813) and Antonio Canova (1758-1824), as well as the painters Jean-Baptiste Augustin, François Gérard and Antoine-Jean Gros. Our particular terracotta can be attributed to the circle of the Lyon sculptor Joseph Chinard, known for having produced several busts and medallions of Juliette Récamier (ill. 2 and 3). It was certainly during one of his stays in Paris that Chinard made his first model. The artist arrived in the French capital in the mid-1790s and was notably welcomed by the Récamier couple in 1801-1802, who then received the molds of one of the Chinard medallions: "Monsieur Récamier kept the molds, perhaps. be reusable, in a locked cabinet when a copy had to be offered in the circle of friends or the relations of the couple ".
However, the present work cannot be attributed to Chinard. Many other terracottas by his hand confirm this opinion. It should be noted in particular the difference in the handling of the material, the details typically anti-Chinard and later in the nineteenth century such as the flowers, the ruffles in her garment on the chest, the round pleats of the dress (in particular at the ends), the lack of precise expression on the face, as well as the absence of redundant details, applied wet clay before firing. Our terracotta also lacks the delicacy and neatness of shapes and contours, which is so typical of Chinard's works. However, this is indeed a work from the beginning of the 19th century, done in a style reminiscent of that of the master, and could therefore be attributed to another French artist of this particular period.
Given that the portrait of David made in 1800 remained in his unfinished studio, and that it may not have been seen by the general public until after entering the Louvre in 1826, our work may have been produced by a sculptor who knew the work of Chinard and who lived in the beginning of the XIXth century. This brings us to think of the Lyon sculptor Clémence Sophie de Sermezy (1767-1850), a pupil of Chinard.

Clémence Sophie de Sermézy (1767-1850)
Daughter of Pierre-Clément Daudignac and Magdelaine Simonard, Clémence Daudignac belonged to a well-to-do family in upper Lyon. His father was administrator of the Grant, titled Director and receiver general of royal and patrimonial rights of Lyon. His mother's uncle was a certain M. Simonard, a great friend of Juliette Récamier's father, with whom de Sermezy would later become friends. We don't know anything about his early years, except
of the fact that she became de Sermezy by marrying Marc Antoine Noyel de Béreins, comte de Sermezy, in 1789.
In the 1790s, de Sermezy became a pupil of Chinard and began to develop his sculptural activities. her first work would be a medallion representing a young woman in Diana, dated 1792. She quickly acquired some local fame as a sculptor. She became an associate member of the Académie de Lyon in 1818, and on the occasion of an exhibition for the benefit of the unemployed in 1827, she sent nine terracotta sketches to the town hall of Lyon, as well as her portrait by Pierre Révoil (ill. 4) and the sculpture "A lady playing the harp" by Joseph Chinard. These works were the only ones exhibited during his lifetime by the artist, who never shared his art again. However, his great career includes a large number of statuettes, religious sculptures and beautiful busts, such as that of Eudoxie Deschamps de Villeneuve (1824) or the Portrait of Madame Révoil (1837). The many portraits of Lyon celebrities that she has produced have identified several of her contemporaries. Part of Sermezy's work is now exhibited at the Salon des Fleurs of the Musée des Beaux-Arts in Lyon.
De Sermezy also directed a salon which in the first half of the 19th century became an artistic and cultural center of the city of Lyon and where illustrious personalities of his time, such as Joseph Chinard, the painters Pierre, gathered. Révoil (1776-1842) and Fleury François Richard (1777-1852), Jean-François Bellay (1790-1858) and politicians Camille Jordan (1771-1821) and Jean-Baptiste Dugas-Montbel (1776-1834). Illustrious personalities outside the city of Lyon have also visited his living room, such as François-Joseph Talma (1763-1826), Mathieu de Montmorency-Laval (1766-1826) and Germaine de Staël. It is even said that Juliette Récamier
joined her during her exile, but this reference must be verified (Portraitistes lyonnais 1814-1914, exhibition catalog, Musée des Beaux-Arts, Lyon, 1986).
Several similar terracotta compositions by De Sermezy are known, fine examples are: Funeral figure (1810, ill. 5), La Consultation (1821, ill. 6) and Dame advising a page or Jehan de Saintré and the Lady of the Belles Cousins (1824, ill. 7).
The present work shows some similarities in the handling of soft materials, subject matter, and overall composition of the artist's 1820 works, such as in King David playing the lyre (1825), Pierre de Provence and La belle Maguelonne ( 1829) or Man holding a little girl in his lap (date unknown, ill. 8). But it is closer in certain details to the works of the late 1820s of the artist or even around 1830, especially in certain outlines and the lack of precision of the lines.

Related work
A biscuit print after our terracotta was formerly in the collection of Lady Charlotte Mosley (b.1952), daughter-in-law of Diana Mitford, editor and journalist (ill. 9). 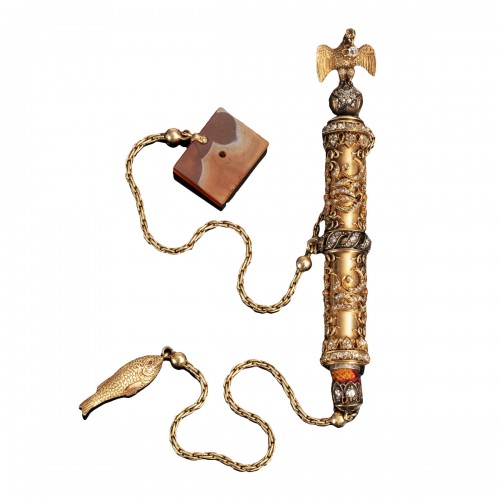 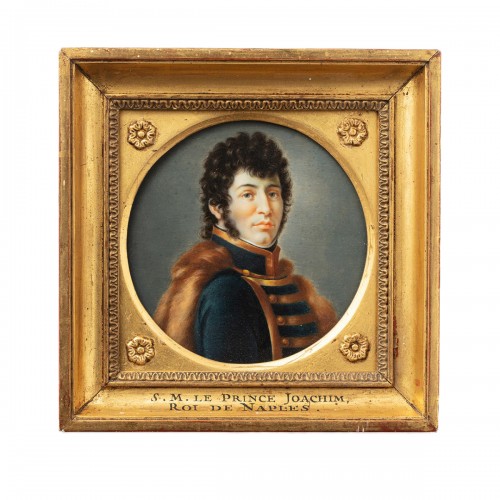 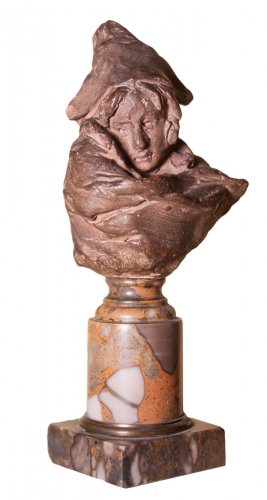