It is presented under the features of an apparent quietness. His oval face, with a particularly rounded forehead, is pigmented white - made with kaolin. His eyes, in the shape of coffee beans, are segmented with fine incisions. They are enhanced by brown eyebrow bows. Her ears are half moon shaped, her nose opens to wide nostrils, and her lips are individualized, hemmed and finely drawn.
The shell hairstyle is poly-lobed, pigmented with black and entirely incised with fine stripes, reflecting the braided hair of the Punus. On the lower part, at the chin, a wood detachment appears as a collar. It allowed the maintenance of fabric or plant fibers that served to conceal the body of the wearer.

This type of mask is called Okuyi - which is also found according to the regions called Mukuyi or Mukudji. It refers to ancestor figures. Symbolically, the white kaolin refers to the ancestral link and the world of the dead.
It appears to commemorate the deceased during funeral ceremonies and full moon nights.
Raised on stilts, the dancer, the mask, strictly speaking, and his clothing become one. And the three entities form "the mask".

This mask was collected in situ by the administrator Mr. Riotte in 1927. 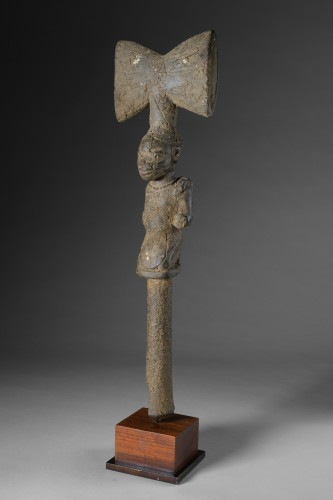