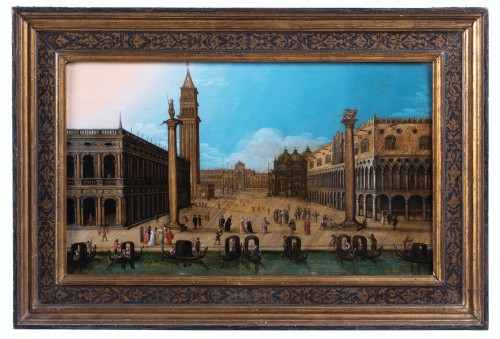 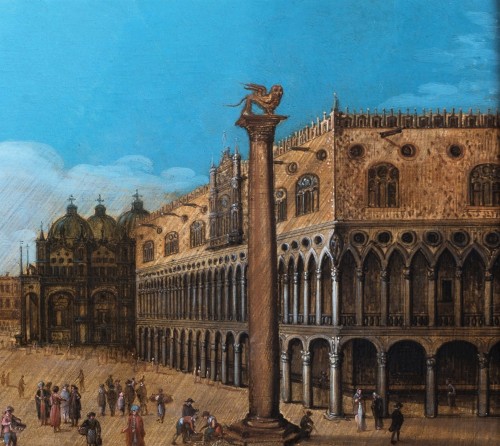 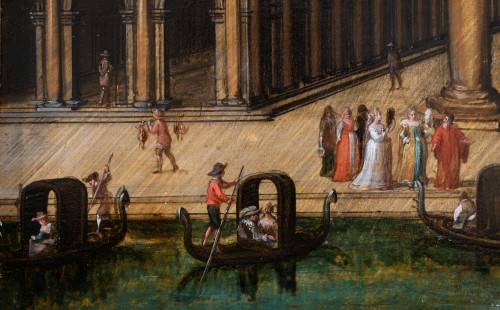 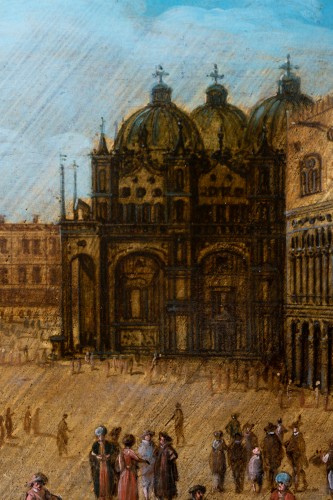 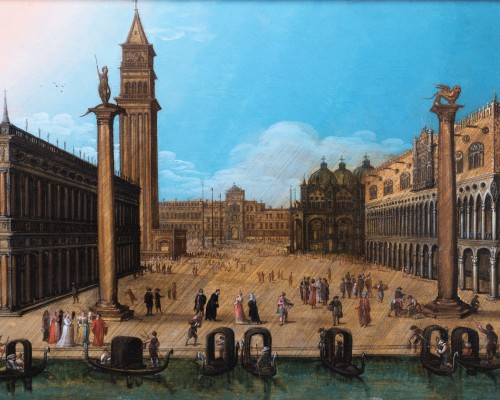 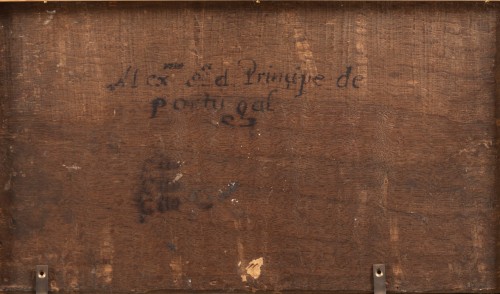 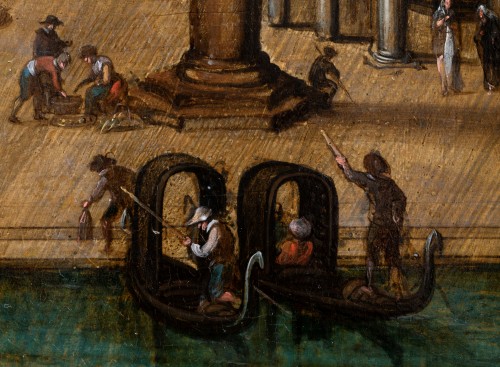 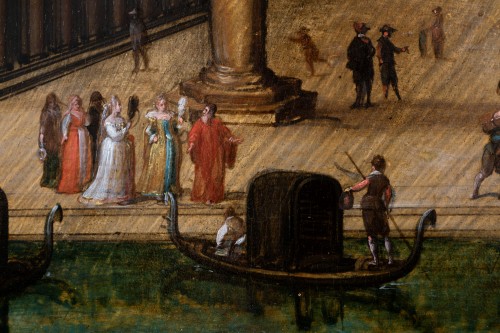 Our painting is attributed to the Antwerp painter Louis de Caullery who during his career executed several works depicting Venice in its many aspects and thus became with his colleague Sebastian Vrancx, the precursor of the genre "veduta" and at the origin of an artistic trend that will reach its peak with works by Canaletto and Guardi.
In our work the artist has chosen to illustrate Saint Mark's Square, one of the most emblematic places in Venice, seen from Saint Mark's Basin. Thus it is the "piazzetta" properly spoken that is discovered before our eyes, between the Doge's Palace and the Marciana Library, a place of walk and life dominated by Saint Mark's Basilica and the Campanile, displaying at the background the clock tower of Saint Mark. On the piazetta, two columns are erected surmounted by two sculptures, the one on the left, of Saint Theodore in marble, the one on the right of the winged lion of Saint Mark in bronze, the emblem of the city and of the Republic of Venice, the protector since 828.
An imaginary sight that the artist is supposed to have painted comfortably seated in a gondola, and thus in the foreground the green waters of the grand canal of Venice catch the eye with their changing reflections and welcome numerous gondolas whose passengers arrive or leave wandering about their business.
The space of the square is occupied by elegantly dressed people intermingled with vendors, hawkers, servants, here rub shoulders with city notables, beautiful women strutting around, oriental travelers lost in this chaos.
This bustle contrasts with the serenity of the deep blue sky, the whitish clouds of which accentuate the intensity of the color even more.
The painter seems to magnify Venetian architecture at the expense of figures that seem insignificant compared to the imposing buildings.
He uses the contrast between the warm colors of the buildings (yellow, brown, ocher) and the cold colors of the sky to immerse his composition in a Mediterranean luminosity.
With precision our artist endeavors to enrich the composition with numerous details, the palette is endowed with the various shades and hues used for the costumes of the delicately painted characters.
Our work dating from the beginning of the 17th century and exalting the majesty of Venice is one of the first tributes to this city, which by its fascinating beauty will inspire generations of artists for centuries.
Perfect original condition.
Dimensions: panel: h. 32 cm, l. 54 cm
Attributed to Louis de Caullery, Antwerp, circa 1610-1620
"Cassetta" frame of later period in giltwood with foliage decorations on a black background.
Dimensions with frame: h. , l.
An old inscription in ink on the panel in Portuguese: His Excellency, Serene Prince of Portugal. Probably a diplomatic gift offered to a Portuguese prince.
Similar works:
- Christie’s London, July 30, 2020, lot n. 36, almost identical composition
- Sotheby’s London, July 7, 2000, lot n.108, similar composition with the carnival on the square
- Sotheby's London, November 4, 1990, lot no214, almost identical composition.
Louis de Caullery (Caullery / Cambray 1555 - 1622)
Born in the town of Caulery, near Cambrai, Louis de Caullery moved to Antwerp in 1594 where he became a pupil of Joos de Momper, then master of the Guild of Saint Luke in 1602.
If we have little knowledge about his apprenticeship, Louis de Caullery seems to have been particularly interested in the representation of gallant scenes, through different subjects: festivals, carnivals, allegories of the senses, but also by illustrating different European cities. , including Venice and Rome in particular, as well as imaginary cities like Babylon. His Antwerp colleagues Sebastian Vrancx and Hendrick Van Cleve have produced similar works and all three contribute to the emergence of a new genre called "veduta". 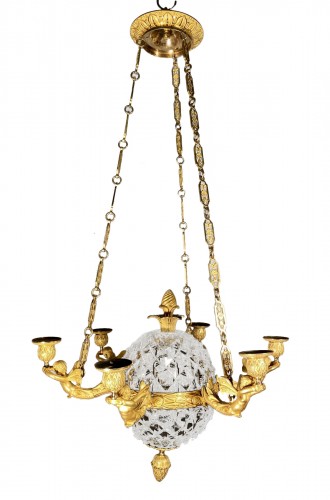 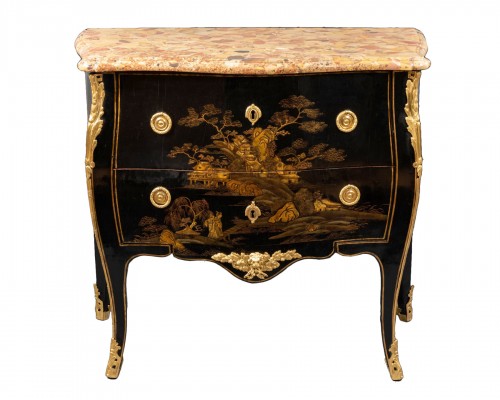 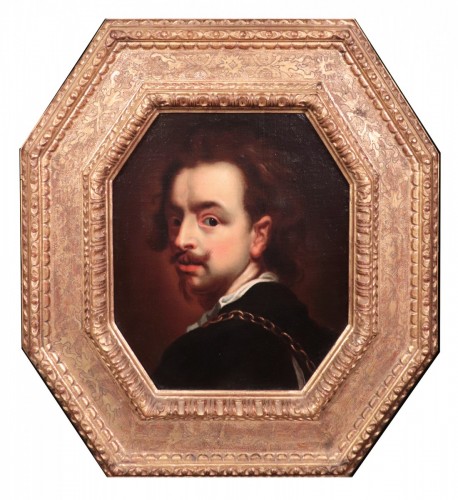 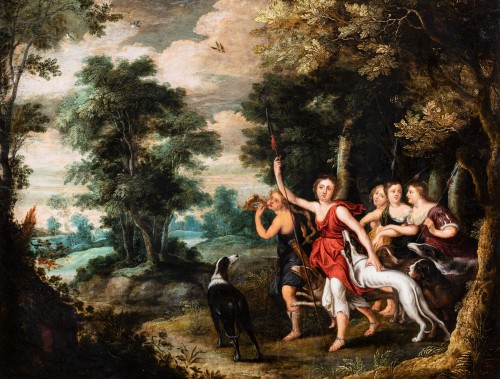 Diana and Her Nymphs, attributed to Frans Wouters, 17th c. 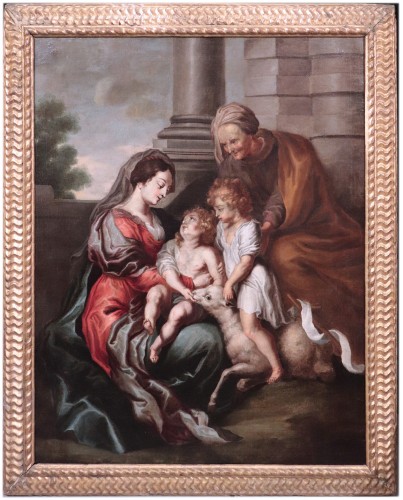 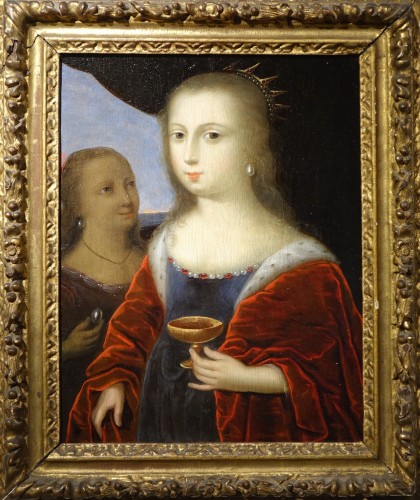