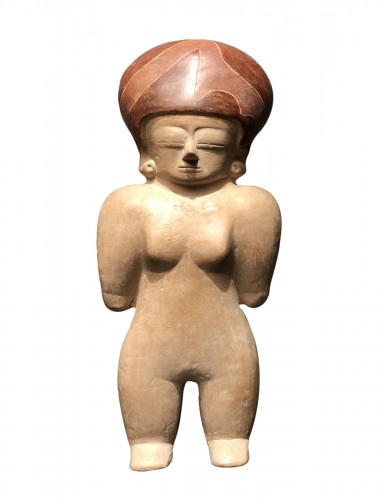 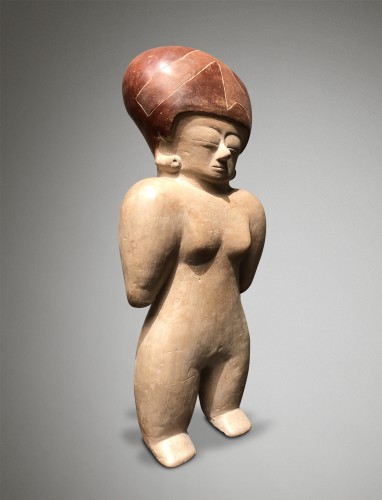 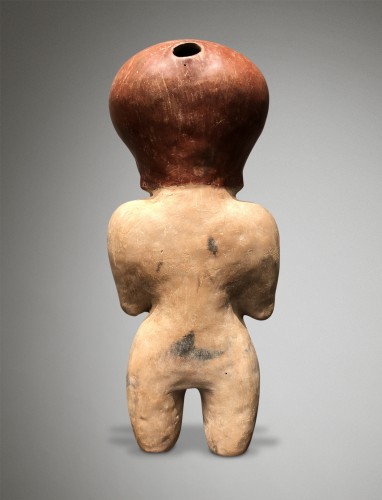 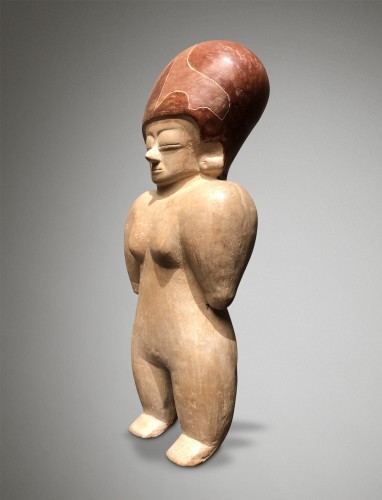 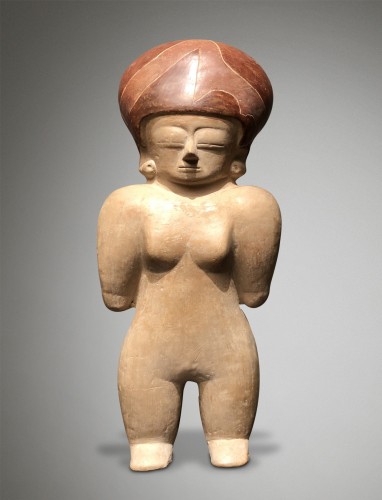 Condition : Excellent condition
Object sold with a certificate of authenticity and a thermoluminescence test.

This woman with beautiful, carefully polished rounded shapes is emblematic of the great hollow figures of Chorrera art, the last formative tradition in Ecuador, which succeeded the Valdivia and Machalilla cultures and spread from the coast to a large part of the country, judging by the many regional styles attached to it in the valleys and mountains.

Made from a mold, it uses the ideal proportions of the Venus callipyges Chorrera. Naked, with a slightly raised chest, she is shown standing in a frontal and frozen attitude, her eyes closed suggesting a deep sleep or an intense moment of meditation.

Her disproportionate head is the center of attention. She wears a red-brown helmet with a glossy patina, decorated with an engraved and left-matt pattern, a symbol of her rank and authority. This domed headdress, typical of the Chorrera Venus, is the origin of the name "aviator" by which they are also referred to. Its peculiar shape, broad in front, narrow in profile, and relatively tall, indicates that this woman underwent a ritual deformation of the skull, as was customary in South America among the ruling classes.

Enclosed by this imposing head covering, the peaceful face does not present any real individuality but is, on the other hand, imbued with great gentleness. The lightly raised eyebrow arches join a short, straight nose. The eyes and the mouth are soberly indicated by fine horizontal engravings. The cheeks are flat and the ears adorned with cylindrical coils, another attribute that signals that this woman belongs to the elite. Her wide upper eyelids, slightly swollen, appear heavy and help give her a solemn character and a strong interiority.

The hieratic body is treated simply and symmetrically. The hands and feet are schematic. The straight and developed shoulders give her a powerful stature. She has muscular and short arms, in the shape of large pears, framing a thin waist and a narrow bust animated by two tall and slender breasts. Below, we observe the flat and smooth stomach and the beautiful wide and round hips leading to thick and short legs.