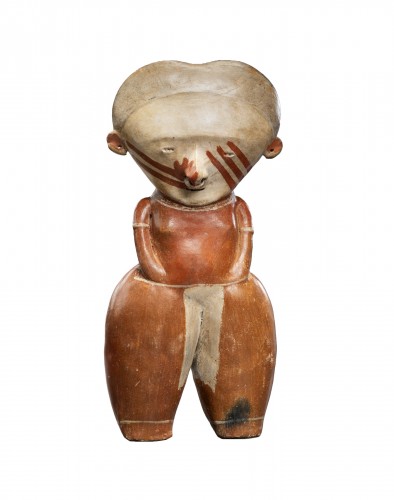 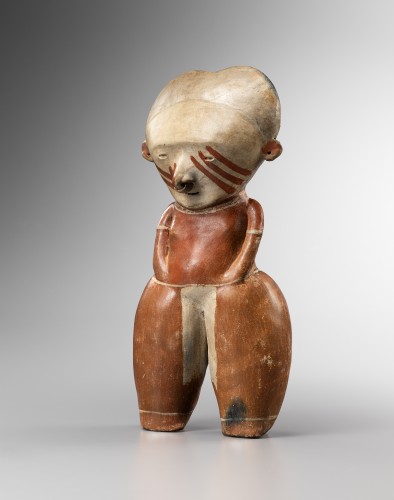 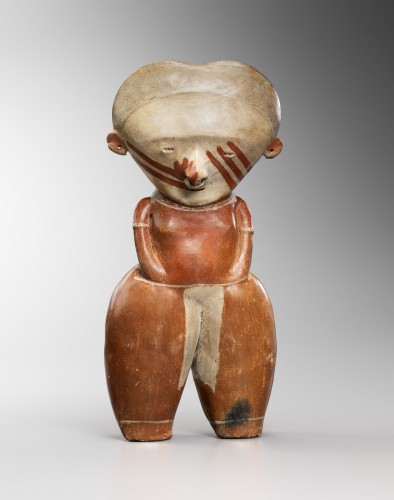 Condition : Excellent condition
Object sold with a certificate of authenticity and a thermoluminescence test


This figure is a very fine example of a Chinesco terracotta figurine. The harmony of the forms and the balance of the proportions combine with the serene and spontaneous attitude of the figure to give it a remarkable expressive power. Moreover, the quality of its execution and its state of preservation further highlight its very beautiful aesthetics.

The skull, elongated and enlarged by a ritual deformation, is adorned with a very tight headdress. The high and receding forehead is interrupted by a protruding supraorbital bulge. The long, aquiline nose bears a nasal ring. The eyes with hemmed eyelids are hollowed out in the shape of an almond. The ears, small and protruding, are pierced.

The narrow shoulders frame a small chest. The tubular arms are depicted along the body. The hands are not represented and can be guessed at the top of the thighs, which are folded up. The delicately shaped buttocks are as wide as the long ellipsoid legs. The straight feet can be guessed by a short slope.

The beige complexion of the face is enhanced with red paint. Two parallel lines start from the right ear and join the nose to form what looks like the imprint of a hand. Three other lines, coming from the left side of the jaw, frame the left eye. The body of this woman, entirely coloured red, is decorated with painted beige elements such as a necklace, a loincloth and arm and ankle bracelets.