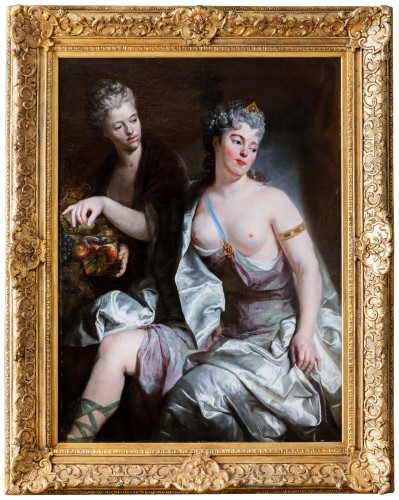 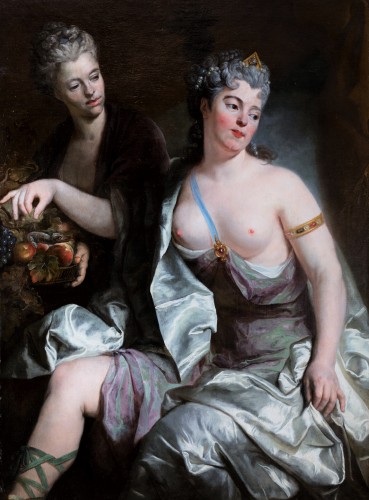 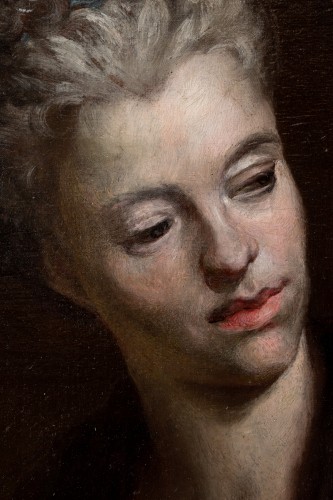 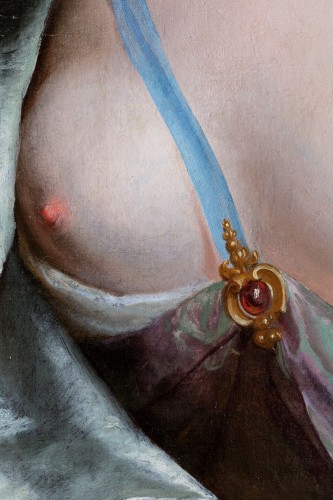 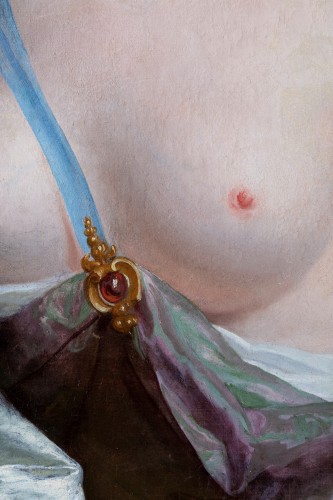 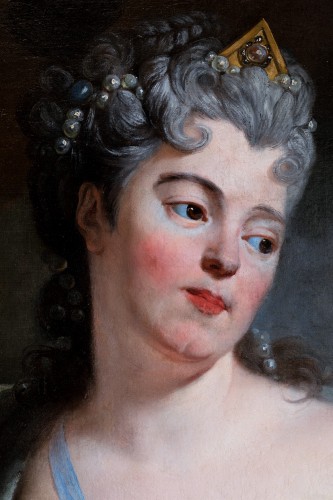 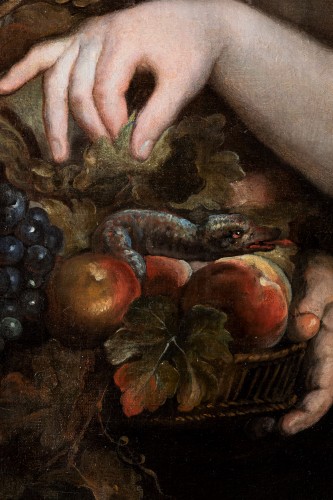 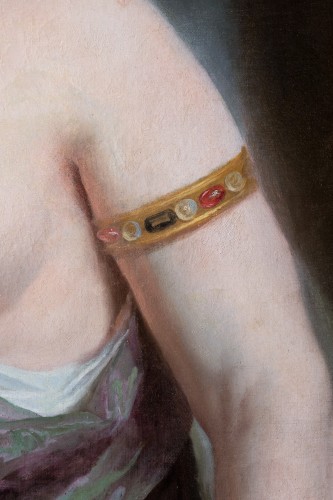 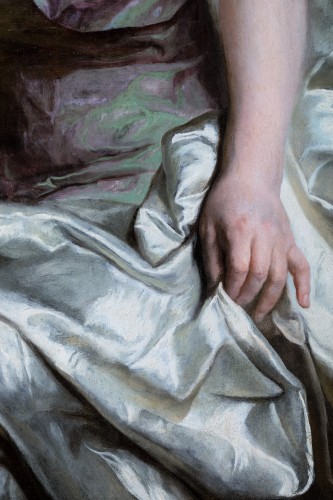 Oil on canvas, size: h. 128 cm, w. 94 cm
Beautiful giltwood later frame.
Framed: h. 158 cm, w. 125 cm
Our painting depicts a half-dressed woman, portrayed as Cleopatra, accompanied by her servant in the background.
The young woman has an elegant hair style according to the fashion of the early 18th century, hair abundantly powdered, the two locks framing the forehead, she wears a tiara inset with precious stones decorated with rows of pearls in her hair held in a bun from which many curls escape on her bare shoulders.
Darkened eyebrows, scarlet mouth and cheeks accentuate the whiteness and freshness of her face.
A fashionable antique bracelet adorns her arm, while an iridescent tunic revealing her chest is held up by a ribbon stapled just below her breasts. Her body is wrapped in a large fabric of shimmering white satin, the numerous folds artistically arranged with shiny reflections.
In a sensual attitude she exposes her bare leg at mid-thigh adorned with a green ribbon intircately tied around her calf.
The servant in the background, with powdered hair held back by a blue ribbon, dressed in a velvet cloak, holds in her hands the basket from which the snake emerges and looks intently at the young woman.
With the fingers of her left hand she delicately pinches the satin of her fabric, while she raises her right arm towards the basket filled with peaches and grapes, and with a deft gesture, takes a wine leaf with her fingers.
The young woman turns away from the imminent danger, head tilted to the left, eyes slightly lowered, she waits with a resigned and melancholic air for the serpent bite. In a theatrical setting, framed by heavy curtains, the model's attitude amplifies the imaginary tension of Cleopatra on the verge of losing her life.
The strong lighting coming from the right enhances the young woman, accentuating her white flesh and bare chest. This almost electric light creates metallic reflections in the fabrics, increasing the shine of the satin rendered with striking realism.
Our work thanks to the skilfully executed drapery, the treatment of fabrics, the studied modeling of the faces, the admirable use of chiaroscuro testifies to the great know-how and unparalleled talent of its author. All its characteristics allow us to attribute our painting to Nicolas de Largillière, an artist known for his talent as a portrait painter and his strong baroque tradition, depicting in the guise of famous characters and divinities his large clientele of nobles, magistrates and financiers in search of prestige.
Sensuality and eroticism accentuated by languid body language and a suave attitude in a dramatic setting make the portrait we're offering unique and remarquable. Despite the liberated morals under the Regency, a portrait of a half-naked woman is very rare, and can only signify a special or even a secret order.
Despite our research, we were unable to identify the model. Nevertheless, the artist's boldness and the cost of a large-format portrait make it easy to assume that this was a commission from the Regent, and the model, one of his mistresses.
The death of Cleopatra is a particularly popular subject in the Baroque era in search of a powerful dramatic effect. According to legend, she killed herself by being bitten in the chest by a snake. This erotic dimension of suicide arouses the interest of painters and the theme was very successful in the 17th century, mainly in Italy, but also borrowed by a few French artists.
Under Louis XIV, the attraction for allegorical and mythological portraits prompted portrait painters to draw on the thematic repertoire until then reserved for history painters. According to the wishes of these clients, the artist allows them to borrow the traits of famous characters or deities in order to accentuate their own status. To disguise oneself as Cleopatra for a woman is to give oneself the sovereign air of a powerful and attractive queen of Egypt. However, women frequently choose another more glorious episode in her life, the moment when she dissolves the pearl of vinegar during the banquet in order to impress Marc-Antoine.
The portrait we're offering remains quite surprising in terms of the choice of the model to be represented as Cleopatra killing herself. Is this a real melancholy of the young woman or a desire for dramatization?

Nicolas de Largilliere, born October 2, 1656 in Paris, where he died March 20, 1746, is a French painter. He is one of the most famous portrait painters of the 17th and 18th centuries. Nicolas de Largillière's long career spanned the reigns of Louis XIV and Louis XV, during which he established himself as a leading portrait painter. His feminine effigies, in particular, are striking for their introspective character and their decorative richness.
Trained in Antwerp in the studio of Antoine Goubeau, who taught him nature studies, Nicolas de Largillierre remained true to his precepts throughout his career. In 1673 he went to England where he worked as an assistant in the studio of portrait painter Peter Lely for nearly seven years. He was admitted to the Académie Royale upon his return to France in 1683 and was received three years later as a "painter of portraits and history" upon presentation of the Portrait of Charles Le Brun (Paris, Musée du Louvre).
Cleopatra is a queen of ancient Egypt of the Lagid dynasty born around 69 and died on August 12, 30 BC. She reigned over Egypt between 51 and 30 with her husband-and-wife Ptolemy XIII and Ptolemy XIV, then alongside the Roman general Marc Antoine. She is famous for having been the companion of Julius Caesar and then of Marc Antoine, with whom she had several children. A stakeholder in the civil war between Marc Antoine and Octave, she was defeated at the Battle of Actium in -31. His defeat will allow the Romans to successfully conquer Egypt, an event that will mark the end of the Hellenistic era. 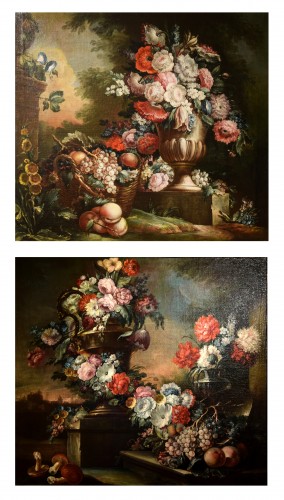 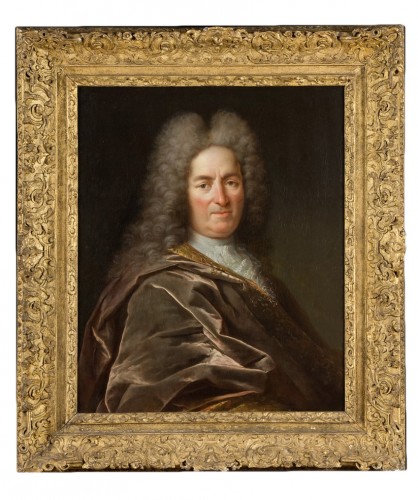 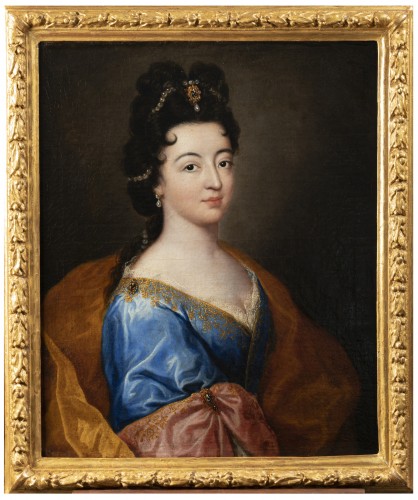 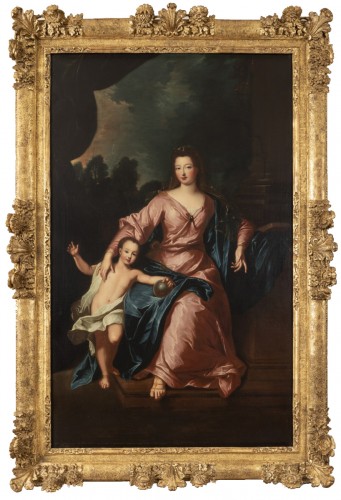