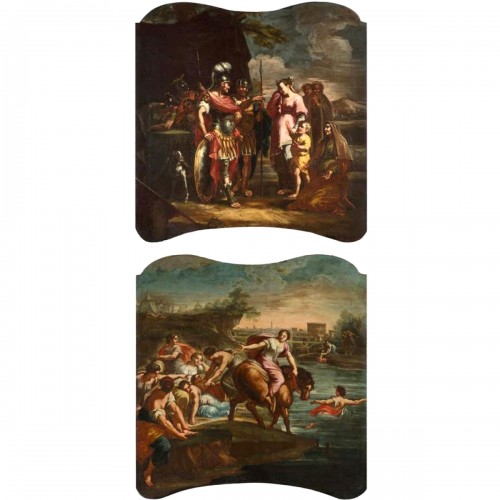 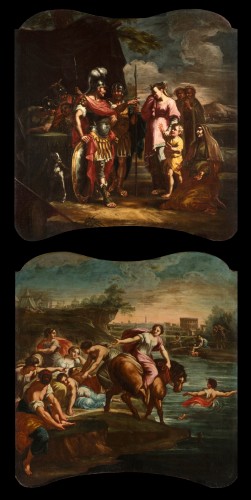 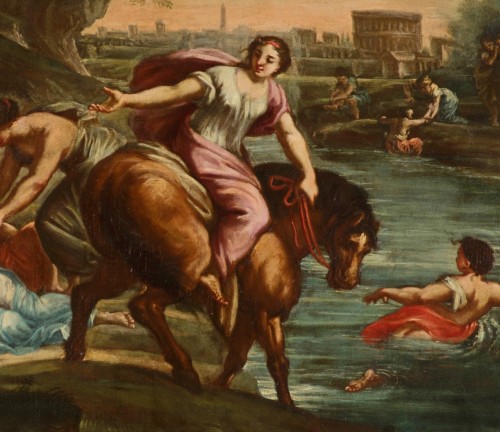 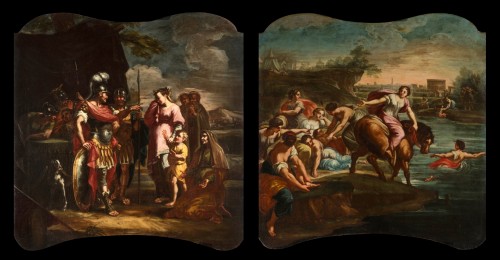 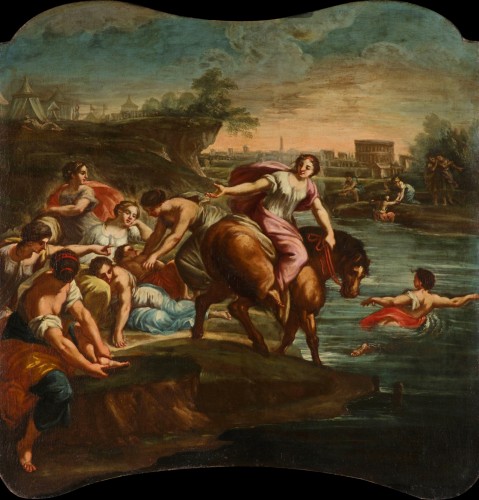 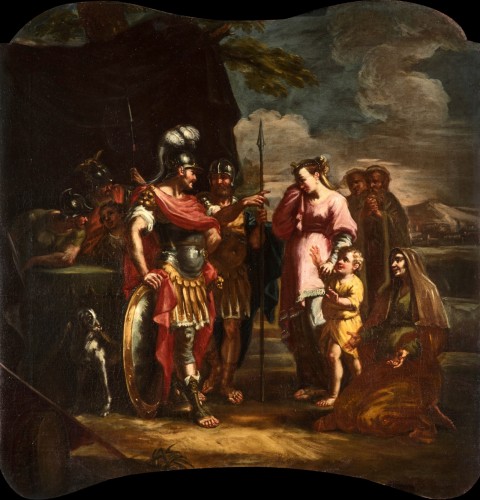 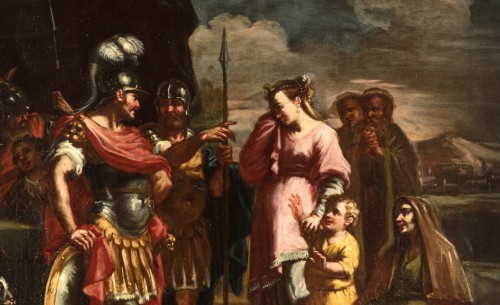 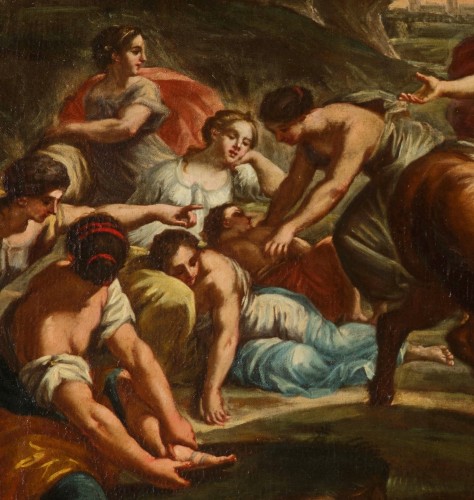 18th Century, Pair of Italian Paintings With Stories of Rome
Italian painter active in Piedmont (north of Italy) the first half of the 18th century
Pair of paintings depicting
«Coriolano meets his mother Veturia and his wife volumnia with his son»
and «Clelia crosses the Tiber»
Oil on canvas, cm h 107,7 x l 110 cm (without frame)

The of oil on canvas paintings presented here, in good condition, depict two episodes related to the myths and legends about the birth of the Roman Republic. The first work, on the left, represents «Coriolano meeting his mother Veturia and his wife volumnia with his son», while the second painting shows «Clelia crossing the Tiber». Both episodes are narrated by Tito Livio in his “Ab Urbe condita libri”.
The canvases can be traced back to the Piedmontese area, in the north of Italy, works of a painter updated to the taste diffused in Turin in the first half of the 18th century. It highlights the fine painting quality and the balanced composition and color. Artistic historical studies are underway in order to better delineate the author and the cultural context.
The type of subject, the liveliness of the chromatic palette and the particular shape of the frame make them particularly suitable to be placed on two dressers or consoles and in any case easily fit in any room of your house, combined with ancient or modern paintings.
The first work tells of Gaio Marcio Coriolano, member of the ancient Gens Marcia, politician and valiant general at the time of the wars against the Volsci. Under the consulate of Marco Minucio Augurino and Aulo Sempronio Atratino, in 491 BC, Coriolano was strongly opposed to the reduction of the price of wheat to the plebs, who took it in strong hatred. According to Livius, Coriolanus refused to go to trial by the tribunes of the plebs, choosing voluntary exile with the Volsci, and for this reason he was sentenced in absentia to exile for life. Animated by strong feelings of revenge towards Rome, the Volsci and Coriolano began to plot for a new war against Rome. He then headed the Volsci, invaded the Roman territory conquering numerous cities. The painting represents the moment when at the gates of the city, at the fourth mile of the Via Latina, Coriolano was stopped by the entreaties of his mother Veturia and his wife volumnia, who rushed with his son, who convinced him to desist from his purpose of destroying Rome. The painter grasps, in particular, the dialogue between the mother kneeling to him while asking him if here we find an enemy or a son and if in your camp I must consider myself a prisoner or a mother.”
Coriolano is depicted, according to tradition, as a man of high Roman military rank: with chiseled helmet with crest, armor with fringes, gladium, calighe, red mantle, shield, all with profusion of golden decorative details. Veturia and volumnia wear long tunics and the wife is haired with tiara and pearls as befits the high rank of matron.
The composition is calibrated and not static and all the characters, even the secondary ones, appear linked one to the other by the gestures of the poses while their dislocation contributes to create the depth of the spaces echoed also by the structures of the tents of the camp and the landscape glimpse in the distance.
The other work represents Clelia that crosses the Tiber. Clelia was a young Roman woman who demonstrated her courage in the period when Rome was besieged by Porsenna, king of the Etruscans. The Etruscans and the Romans had entered into the peace but Porsenna, in 507 BC, had requested nine girls as hostages that the Romans had given him punctually. The girls soon fled the Etruscan camp and headed towards the Tiber. Since there was no longer the Sublicio bridge, Clelia, the girl who led the group of fugitives, invited the girls to swim across the river. They all jumped into the water without fear of the cold. Meanwhile, the Roman sentries had spotted them and, believing they were enemies, gave the alarm. Led before the consuls, were sent back to Porsenna to respect the pacts. Porsenna asked Clelia who had come forward to plead guilty to having incited the other girls to flee; she answered with pride the questions also stating that she had not repented of what she had done and that indeed the’would have done it again. The king was admired by the pride of the girl and impressed by the loyalty of the Romans, so he allowed clelia to return to Rome and take with her five other girls of her choice. Clelia chose the youngest and in the evening the six girls were able to hug their parents again. The grateful Romans honored him with an equestrian statue on the top of the sacred road.
The composition of this canvas is inspired by an engraving of 1690-1710, by Andrea Procaccini, after Carlo Maratta.
The two canvases have a moulded perimeter that suggests that they could originally be designed to be placed either as an overhang or inserted inside a boiserie in a hall of a noble palace.
We apologize for any translation errors from Italian. 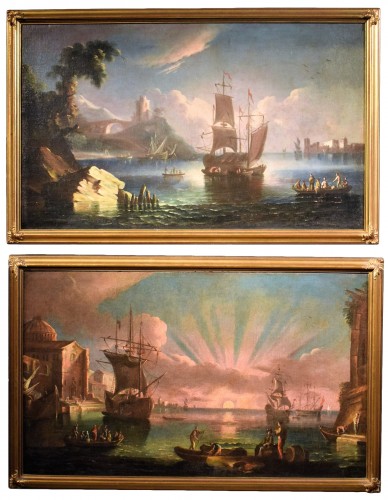