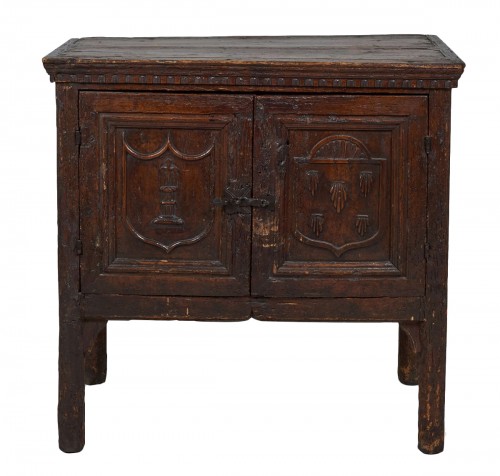 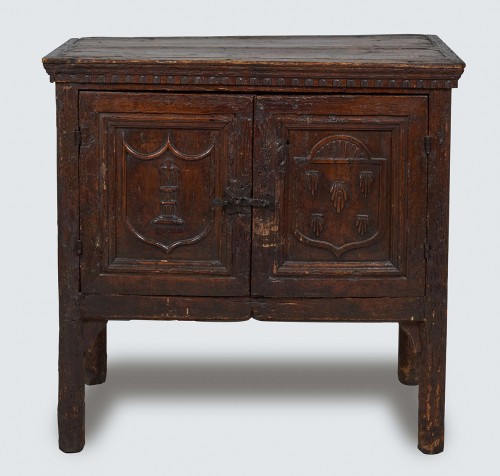 Standing on a four high feet this sacristy cabinet opens with two door-leaves. The lateral side panels bears a finely preserved linenfold decor. The cabinet’s interior is painted in dark red.

On both door-leaves are carved what appears to be a coat-of-arms. As it is a sacristy cabinet it is particularly intersting to analyse the iconographical decor :

In a curved shield are distributed in quincunx five identical motifs : from a horizontal bar goes five or six lines with a rounded end. It figures the Five Holy Wounds of Christ stylized. Two for the hands and two for the feet because of the crucifixion plus a wound in the side of Jesus’ chest made by the Roman centurion to observed His death.

These wounds are mentioned by the gospel of Saint John and in the story of the Resurrection and of the Incredulity of Saint Thomas. A 14th century byzantine theologian, Nicolas Cabasilas, describes the Passion and Resurrection of Jesus as a testimony of the love of God for men symbolised by the wounds of Christ, resurrected despite the laws of nature.

The oldest instance of the Quinquepartitum Vulnus is to be found in the work of Peter Damian, an Italian monk of the 11th century. After the return from Crusades and from the Holy Land appears a strong worship for the Passion and the Holy Wounds. This devotion is approved by Church during the council of Lavaur in 1368.

The symbol carved on the left hand side door of this sacristy cabinet is more enigmatic. Placed on a large base in the center of a curved shield, rises a two storeys structure topped by a cross.

It could evoke a chalice one of the major symbols of Church, or a tower or a fountain.

These two possibilities, a tower or a fountain, refer to the Marian iconography and precisely to the Litany of the Blessed Virgin Mary also called Litany of Loreto. In the Christian world a litany is a group of short invocations dedicated to God, Mary or the saints. Litanies are essentialy redundant and « Pray for us » or « Have mercy on us » is frequently reiterated.

The Litany of the Blessed Virgin Mary recites the pious qualities of the Virgin. We can number around fifty Marian invocations using different names and titles during the course of history. First as a Virgin, Mother, Queen then with some Biblical images mainly draw from the Song of Songs such as « Morning Star, Throne of Solomon, Throne of Wisdom, Ark of the Covenant, City of God, Gate of Heaven, House of Gold, Tower of Ivory, Tower of David, Fountain of Gardens, Sealed Fountain, Enclosed garden, Spiritual Vessel… »

This sacristy cabinet evokes on its left part the Virgin Mary while its right part evokes Christ using symbols of the relation between God and men ie. the Church.