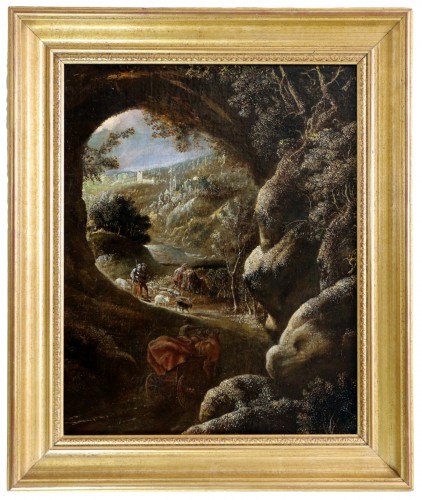 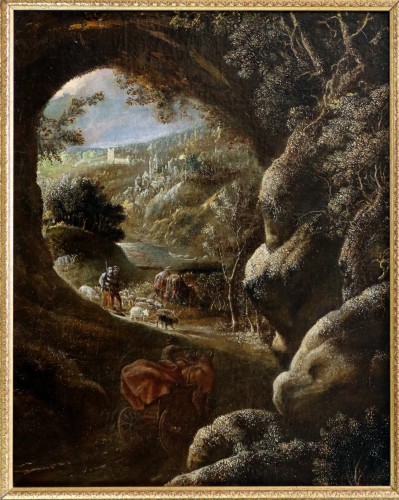 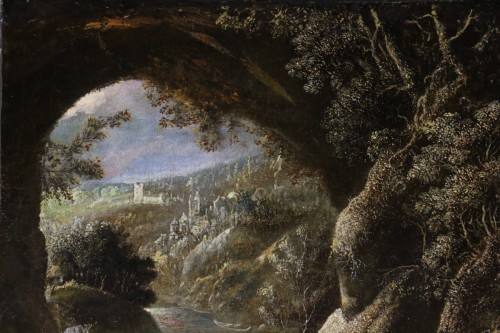 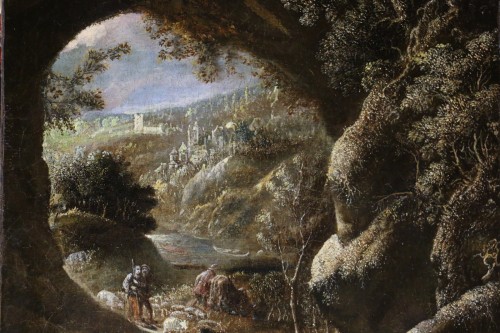 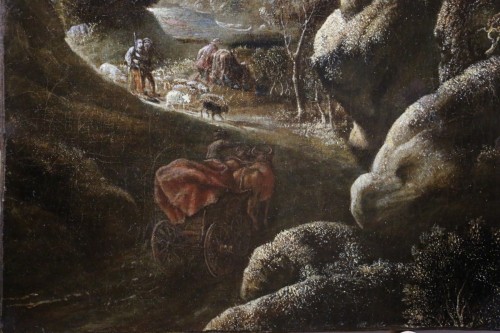 Our canvas is certainly painted by David Téniers the younger at the very start of his career when he was inspired by the canvases of Joos de Momper and before moving to a lighter palette. It is not impossible that his father participated in this painting because the right part of rock and trees covered with these leaves painted with extreme finesse is found, with variants, but with the same characteristics on a work sold at Cologne November 21, 2009, David Téniers le vieux, "Landschaft Mit Verstossung Der Hagar" (photo on request)

He is the Son and pupil of David I, influenced by Rubens, he was famous as a genre painter, but also devoted himself to portraiture, to landscape and to historical painting: “He got his genius from nature, his taste of his father, and his perfection of Rubens. " Several thousand works can be attributed to him, and his virtuosity was immense. Numerous tapestries, both Flemish and French, and large series of engravings disclosed his works and spread his influence until the end of the 17th century.

Frank master in Antwerp in 1632, he married in 1637 Anna Bruegel, daughter of Bruegel de Velours and pupil of Rubens. Dean of the corporation of Saint-Luke in Antwerp in 1645, he was appointed in 1647 court painter and curator of the collections of Archduke Leopold-Guillaume, governor of the Netherlands, who sat in Coudenberg Palace. In 1651, he settled in Brussels. His considerable fortune enabled him to purchase the Dry Toren mansion (the Three Towers). He is responsible for the publication of an album of engravings, comprising 244 Italian paintings from the collections of the Archduke, which appeared in 1658 under the title Theatrum pictorium Davidis Teniers Antwerpiensis. Leopold-Guillaume's successor, Don Juan of Austria, retains him in office. Teniers also sent his works to the court of Philip IV of Spain and to Stadtholder William II of Nassau. He intrigued for a title of nobility, but never succeeded. Widowed in 1656, he married the daughter of the secretary of the Council of Brabant and founded the Academy of Fine Arts in Antwerp, opened in 1665. Its success has continued since.

In his first works (1633), David II applies himself to continuing the traditional Francken style in his genre scenes (the Guardhouse, Rome, GN, Gal.Corsini), but with a chiaroscuro already more nuanced and warmer, and of a composition more sensitive to space; he quickly became the painter of bourgeois life (Société à table, 1634, Berlin museums; the Chancer and his wife, London, NG; the Five Senses, Brussels, MRBA), and of popular life (Scenes of an inn, 1634, Mannheim Museum). He is also sometimes attributed still lifes in the restricted range of gray: Books and globe (Brussels, M.R.B.A.), Violin, world map and book (Rouen museum). Joos de Momper's fantastic mannerism inspired his first landscapes and his Temptations of Saint Anthony (Antwerp, Mayer Van den Bergh Museum; Louvre; Prado; Dresden, Gg).
Between the years 1634 and 1640 approx., The ascendancy of Brouwer, his popular subjects, his cabaret scenes, his measured coloring will dominate the manner of Teniers and inspire the artist to drink his drinkers in a cabaret (Rome, Gal. Borghese) , painted in a chiaroscuro enhanced with red and blue, his Inn Scene (1634, Mannheim Museum), his Cabaret (Louvre), his Pastors (Rome, GN, Gal.Corsini), his Card Players ( Rijksmuseum), his Crepe Maker (Paris, coll. Prince Murat) But, in all these paintings, Teniers does not go beyond a down to earth realism.

Then, in a third period, extending from 1640 to 1650 and which is considered the peak of his career, he adopts a lighter palette, with silvery and luminous hues, and represents village festivals, fairs, animated landscapes. under the influence of Rubens.
In the last decade, his palette darkened and his bill became heavier and brownish. Teniers tirelessly takes up his usual themes: The Alchemist (1680, Munich, Alte Pin.), Fêtes villageoises (Vienne, K.M .; Prado). He multiplied the number of figures at his fairs, as in the Feast of the arquebusiers on the main square of Antwerp (Hermitage). He has often depicted himself surrounded by his family in outdoor portraits that already herald the 18th century. He broadened and renewed all the tendencies of Flemish genre painting. His art pits him against the pathos of Brouwer and opens the way for countless imitators, the best of which are Gillis Van Tilborch and David Ryckaert.

Most of the world's great museums keep entire series of paintings by Teniers; this is the case with the Louvre (around 40), the Hermitage (around 30), the N.G. in London and the Prado. A retrospective was dedicated to the artist in 1991 (Antwerp, M.R.B.A. 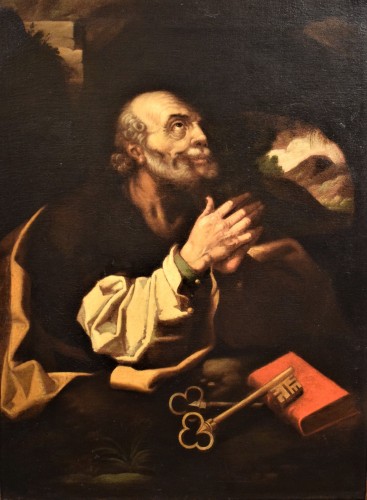