The upheavals of the 1789 Revolution considerably changed French society, leading to the creation of a new elite made up largely of wealthy bankers and aristocrats, most of whom had been given their titles of nobility from Napoleon I. Many were eager to display their new wealth by commissioning furniture from the best artisans of the time. Some of these pieces are today considered masterpieces of French cabinet making. The present guéridon, which was produced in this historical context, features a simple design that is based on classical models. Its round top rests on a tripod base; this model is emblematic of the finest in cabinet making as it was practiced under the patronage of Emperor Napoleon I. The cabinetmaker selected the mahogany leaves very carefully to obtain the most beautiful shades and patterns. The molded marble top rests on an upper entablature that is adorned with a frieze of grape leaves and flowers; the three cabriolet legs, each one decorated with a central wide acanthus leaf and lateral rosettes issuing flowered and leafy stems, terminate in lion’s paws. The three legs are linked by a triangular stretcher with indented extremities mounted on copper or brass wheels.

The different elements combine to create a design of great strength, resulting in a very masculine piece that may be considered an example of strict neoclassical design. It might be said that while the 18th century marked the apogee of “classical” cabinet making with the production of commodes and secrétaires, the Empire raised the guéridon to an unequalled esthetic level, of which the present piece affords an excellent example. It may be confidently attributed to the cabinetmaker Sébastien Youf. It is very similar to a guéridon made by Youf that the Garde-meuble of Napoleon III purchased for 600 francs in March 1863. The following month that piece was placed in the apartment of Prince Jérôme in the Château de Fontainebleau; it is still there (illustrated in D. Ledoux-Lebard, Le mobilier français du XIXe siècle, Paris, 2000, p. 644; the caption refers to the piece on the preceding page). It should be noted that a guéridon identical to the present piece, but with a different treatment of the bronze frieze, is in the Musée national du Château de Compiègne (illustrated in Ernest Dumonthier, Mobilier national de France, Le meuble-toilette, Toilettes-coiffeuses portatives, Miroir, Psychés, Morancé, 1923).

Sébastien Youf (1771-1850)
Was one of the most important Parisian cabinetmakers of the early decades of the 19th century. He spent the early part of his career in Italy where he ran a furniture workshop under the patronage of Napoleon’s sister Princess Elisa, who was the Princess de Lucques et de Piombino. After the fall of the Empire, Youf returned to Paris and continued to enjoy great success, taking part in the most important Exhibitions of the Products of French Industry, and receiving many awards. In 1827 he was awarded a bronze medal, but in 1834 he did not receive any distinction, a fact that was lamented by Moléon, a member of the jury, who stated “this can only be the result of an omission…for M. Youf greatly deserves it …his exhibition is striking…” An unusual and rare pair of italian gueridon, circa 1820, Genoese 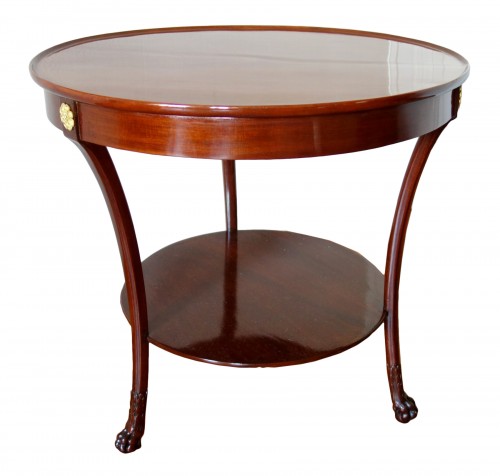 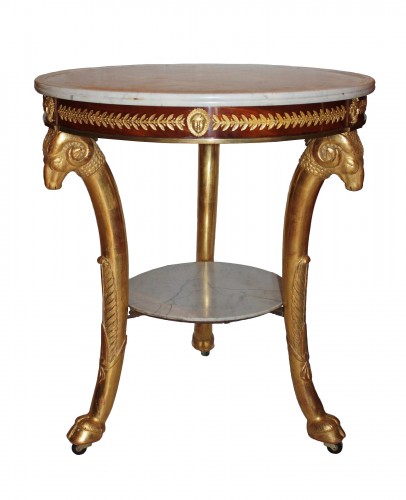 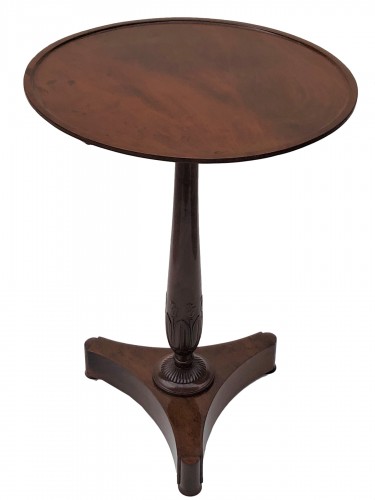 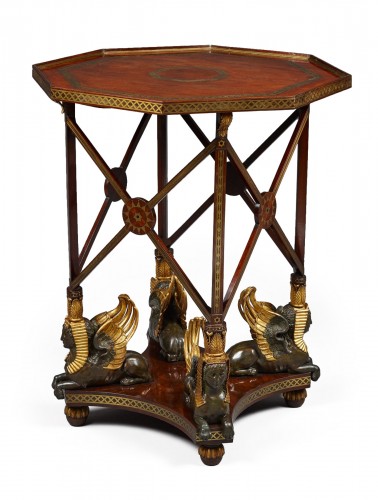