The round enamel dial indicates the Roman numeral hours and the Arabic quarter hours and minute graduations by means of two gilt bronze hands; it is set in a gilt bronze barrel into which a young black man, barefoot and shirtless and holding a stick, pours a sack of coffee as he looks toward the spectator. His face is very expressive and greatly contribute to the clock’s realism. On the other side of the barrel, a naturalistic palm tree lends balance to the composition. The octagonal chased and gilt bronze base is decorated with bas-reliefs depicting bees and two young black children who are gathering twigs together. The base is raised upon five oval bead-decorated feet.

The black man as “noble savage” was rarely used as a decorative theme in French or European horological creations before the late 18th century. It was not until the end of the Ancien Régime – and precisely during the final decade of the 18th century and the early 19th century- that the first clocks known as “au nègre “ or “au sauvage” began to appear. They reflect a philosophical movement expressed in literary and historical works such as Paul et Virginie by Bernardin de Saint-Pierre (which was published in 1787 and depicted the innocence of man); Atala by Chateaubriand (which restored the Christian ideal); and Daniel Defoe’s masterpiece Robinson Crusoe (published in 1719). The present clock depicts a young black slave such as those who worked in colonial plantations. It may be attributed to the bronzier Jean-Simon Deverberie.

Jean-Simon Deverberie (1764-1824)
Was an extremely successful designer, bronze manufacturer and marchand-mercier. Until 1800 he was recorded in the rue Barbette; four years later he was at Boulevard du Temple and from 1812 until 1824 his business Deverberie & Compagnie was based at rue des Fosses-du-Temple. Deverberie was the most important artists of his time to create a series of bronzes and almost certainly the first to make a clock case celebrating the theme of the “noble savage”. 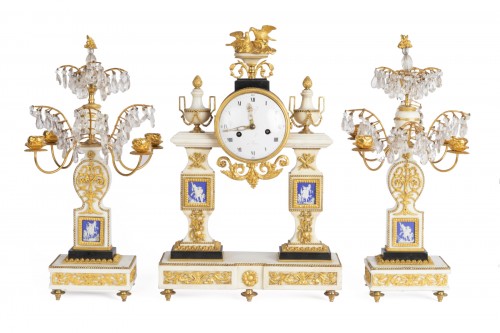 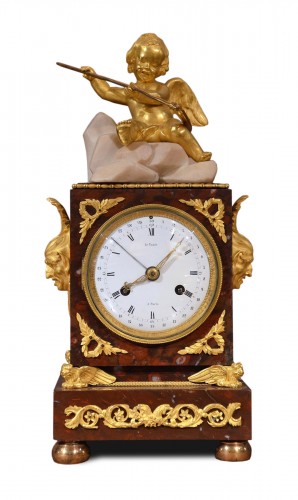