The iconography of the birth of a royal heir appears in all the regimes of the 19th century. It is a talisman against the dread of the dynastic order being overthrown, a threat that had been fulfilled regularly since the Revolution. Though the arrival of the providential child was a consolidating factor for a reigning dynasty, its depiction does not derive from heroic mythology, but is instead borrowed from Christian imagery that bears hope – rather than Hercules smothering snakes in his cradle, it comprises a babe watched over by an angel. Comparison of the drawing by Révoil with Pradier’s group suggests the same iconography, but it is another heir that is being celebrated by the artist who supported the Bourbon dynasty. He did not pledge allegiance to Louis-Philippe and was in fact considered to have resigned from his position as a professor at the Lyon Drawing School after the 1830 Revolution. The Child in his drawing is therefore more likely to be the Bourbon heir, Henri of Artois, Duke of Bordeaux, son of the Duchess of Berry who had appointed Révoil her painter in 1822.

A painter of medieval subjects and collector of “Gothicities”, Révoil ultimately proved to be less Gothic in this drawing than Pradier by draping his angel in the manner of Raphael or his modern emulator, Ingres (the Vow of Louis XIII), rather than in the fashion of the age of Saint Louis. The subject is in addition quite unusual for him and must have been composed especially to please the person for whom it was intended, the writer Louis Aimé-Martin, a follower of Bernardin de Saint-Pierre who had become curator of the Saint-Geneviève library. 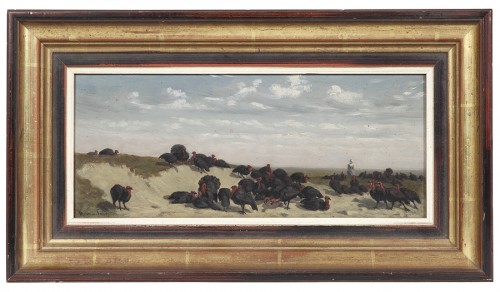