"Renaud and Armide in the Enchanted Gardens."

This tapestry was made by Parisian workshops around 1640, after the painter Simon Vouet.
It represents the knights Charles and Ubald discovering Renaud in Armide's arms, the two heroes under an awning, surrounded by putti. Renaud contemplating in a mirror Armide's face, under the gaze of the two knights hidden behind trees, in a lively landscape with a palace in perspective in the background. The border with garlands of flowers and fruit is decorated with cartouches, supported by two angels in the upper part, adorned with an antique figure in the lower part, and a putti on each side. The spandrels are decorated with trophies with attributes of love.
The Story of Renaud and Armide, taken from the famous epic poem of the Cup, The Delivered Jerusalem (1580), relates the loves of the young Christian knight and the oriental magician. The story was a huge success throughout the 17th century, at a time when taste was evolving towards a literature with sought-after effects. The hanging was woven several times and in several Parisian workshops such as those of the Faubourg Saint-Marcel, the first Gobelins factory, or those of the Louvre. The original suite was to consist of ten pieces retracing the main episodes of the story of the Cup: Armide about to stab Renaud whom she has put to sleep, Armide taking Renaud away in his chariot, the knights Charles and Ubald at the Fountain of Laughter, the knights Charles and Ubald discovering Renaud in Armide's arms, Ubald showing Renaud his image in the diamond shield, Renaud leaving the enchanted island of Armide, Armide, his palace destroyed, leaving the enchanted island, Armide vowing to kill Renaud, Armide having failed and leaving the battlefield, Renaud preventing him from taking his own life. Three drapes by Renaud and Armide, two of which were gold, appeared in the inventory of the Crown's property from 1663-1673.

In 1632, Simon Vouet executed for the Superintendent of Buildings, Henry de Fourcy, the decoration of the gallery of his Château de Chessy, illustrating the episodes in the history of Renaud and Armide. This decoration was used as a model for the hanging's cartoons.
A tapestry illustrating the present episode, woven in the workshops of the faubourg Saint-Marcel, was sold by Sotheby's London on 29 May 1998, lot 15. Another, also woven in the workshops of the Faubourg Saint-Marcel, is kept at the Château du Haras du Pin, and is illustrated in "Vouet", Galeries nationales du Grand Palais, Paris 1990-1991, exhibition catalogue, p.517, fig 14. 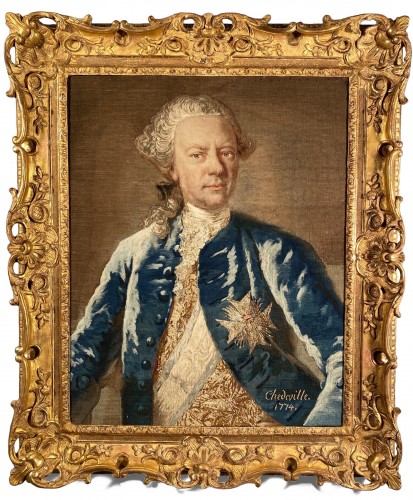