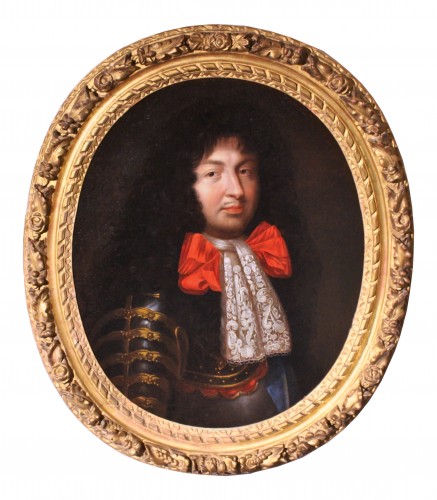 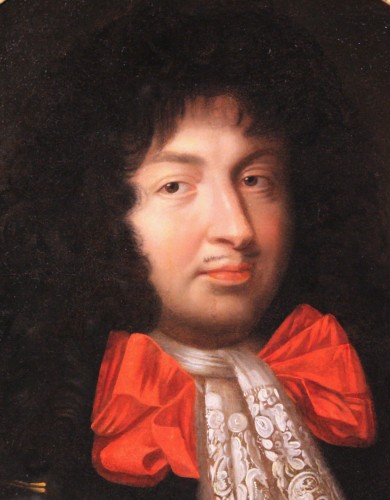 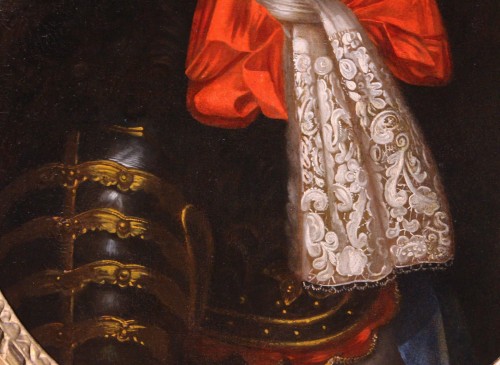 King Louis XIV is depicted in three quarters, in armor, around the neck white lace tie with a red bowtie.. He wears the blue scarf of the Order of Saint Esprit across the shoulder.
Long curly wig falls on his shoulders and frames his face. Looking at the viewer, his solemn and impassive face is softened by a half smile that raises the corners of his fleshy lips. The king displays the fine whiskers, which will tend to thin and disappear around 1686.
The light coming from the left model the face, leaving it partly in the shades. This sculptural effect brings a depth and a more realistic aspect to the portrait. While trying to flatter the sovereign, as one being a painter of the court must do, our artist takes the liberty to accentuate a few wrinkles around the eyes, the eyelids slightly drooping and emerging folds around the nose. He reveals us a man still in full power position but whose age is close to forties.
The portraits in bust used were used as diplomatic gifts, but were also commissioned by the nobility to prove admiration and dedication to the Sun King.
The portraits in armor, rather than the habit of court, proclaimed the belligerent character of the sovereign and the importance of the wars lead by him.
Besides, the war was for Louis XIV the privileged instrument of his prestige and the omnipotence of the kingdom he was set to incarnate.
The image of the warrior king conveyed by his portraits willing only the beauty and glory of the nation become a propaganda tool in France and abroad.
This attractive portrait by his testimony to one of the greatest kings of France, reveals to us simultaneously a humanizing aspect of the Sun King.
The metallic shine of the armor combined with the golden sparks of its ornament, the finesse in the execution of the lace as well as the modeling of the face are all the characteristics of Pierre Mignard's style that allow us to link our work to his studio. This oval bust format is probably a version of a half-length portrait.

Pierre Mignard
French painter (Troyes 1612-Paris 1695). Student of Vouet, he worked in Italy, especially in Rome, from 1635 to 1657, before joining Paris at the request of Louis XIV; he then executed several orders, such as the dome of Val-de-Grace (1663). A renowned portraitist, he knew how to flatter the model, but also to mix expression with grace in light and fresh tones, as opposed to the majesty of Le Brun. On the death of his rival (1690), he succeeded him as the first painter of the king and director of the Manufacture des Gobelins. He has executed many portraits of Louis XIV. About the last one, the king asked him: "Don't you think I have aged a bit?" Mignard replied: "I can only see a few more victories at your Majesty's forehead ..." 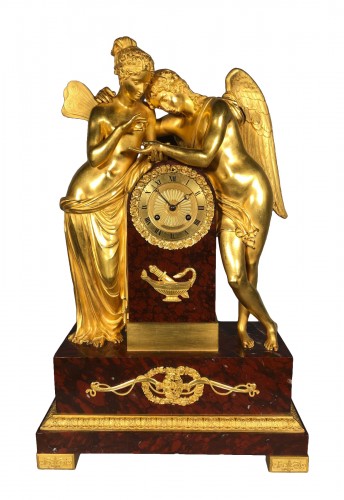 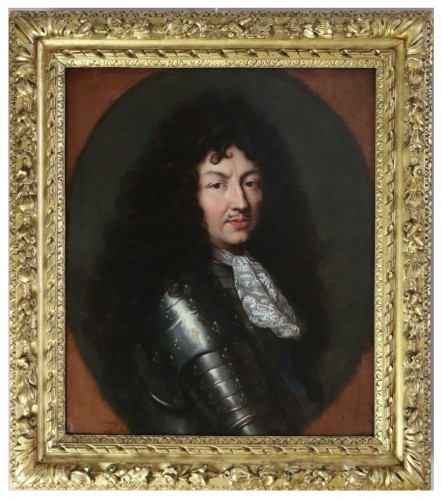 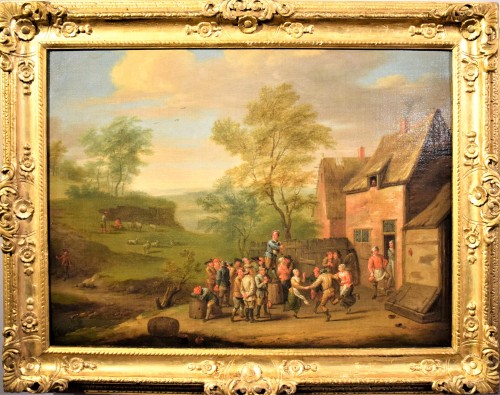