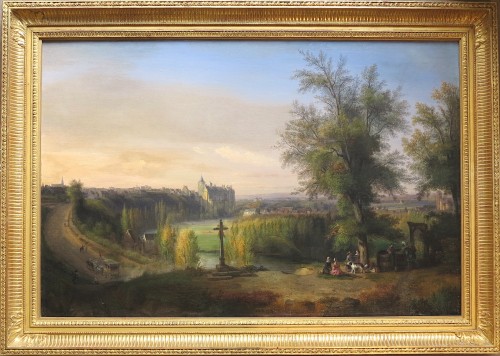 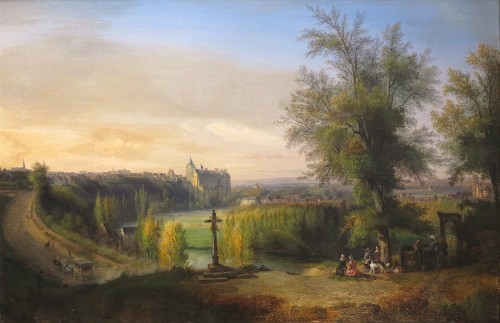 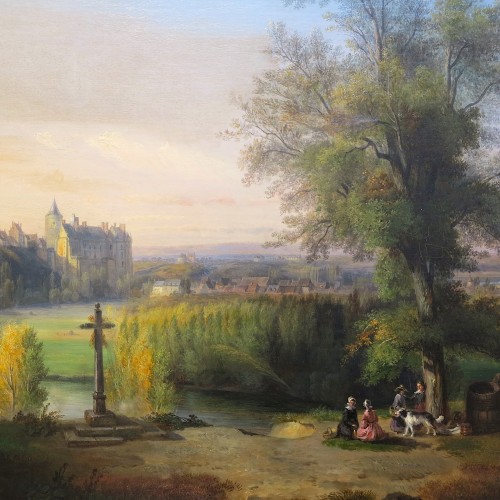 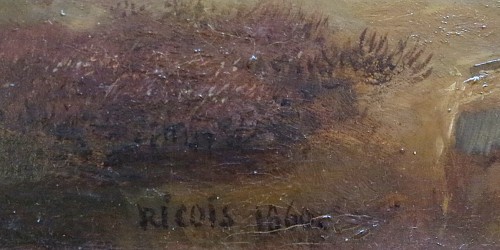 François-Edme RICOIS was born in Courtalain (Eure et Loir) on August 29, 1795 from the union of Jacques Edme RICOIS and Françoise Angélique SOUCHAY but all his childhood was spent in Châteaudun where his parents ran a business of rouennerie.

Following very basic studies at the elementary school of the city, his family placed him at thirteen in a notary's office. The experiment was not happy: while copying his roles, the clerk made a point of illustrating them with flowers, animals and men. The notary thought that the drawing on stamped paper was a bit expensive and with regret, he returned the young RICOIS to his parents.

Fortunately, they knew for a long time the duke of Montmorency, squire of Courtalain, who was interested in the young man and directed him on the studio of a famous artist of his relations, the painter GROS. But the budding artist was more attracted to the landscape than to history painting; so on March 2, 1816, he entered the School of Fine Arts and became the pupil of GIRODET, Charles Bourgeois and especially Jean-Victor BERTIN, himself master of COROT, which he feeds on the principles of neo -classicism, and applied them throughout his life with a clever flexibility in its views of city, port and castle that remain accurate and poetic evidence of the French province in the last century.

At the advice of his masters, RICOIS added the personal work of the open air, traveling all over France and even Switzerland. He started at the Salon in 1819 and participated throughout his life, his last shipment dating from 1880, a few months before his death. He was awarded a second class medal in 1824.

This success put him in vogue and from then on he continued to take part in the Parisian salons and various provincial exhibitions, notably in Douai, Lille, Toulouse and Cambrai, where he was still a medalist. He would undoubtedly have known the highest honors of the career, if a cruel mourning, the death of his young wife, Marie Constance DENIN, after four years of cleaning, had upset his life. Becoming neurasthenic, he settled in Nantes, founded a mixed workshop, and trained for many years many students. But the demon of his freedom soon resumed it, and from 1834 he devoted himself to the study of the castles of the Loire.

Constantly traveling to the four corners of France, RICOIS left a considerable documentary work of which it would be difficult to establish the catalog; Locally, he reproduced the main castles of Eure-et-Loir: Chateaudun, Courtalain, Maintenon, Montigny-le-Gannelon, with a predilection for the southern sites of the department. His technique is diverse: the landscapes are treated with oil, watercolor, wash, and he will also be devoted to glass, a process popular in the nineteenth century.

It was at Mareil-Marly, near Saint-Germain-en-Laye where he had acquired a property, that RICOIS spent the last part of his life. The environs of St. Germain furnished him with a large number of paintings. But to repeat himself, the artist soon lost its originality and charm ... Having reached an advanced age, at 77, he still obtained bronze medals at the international exhibition in London in 1875. This was the last burst of his flame. He lived a few more years, but his weakened vision forced him to give up the last sketches he was still drawing.

From his union was born a girl on December 2, 1830 named Marie-Octavie RICOIS who was herself a painter and teacher of drawing.

On the castle of Châteaudun:
Spectacularly large, Châteaudun Castle was built over four centuries. At the end of the 12th century, Thibaud V, Count of Blois, built the still visible dungeon of our day and last vestige of the medieval castle. Two centuries later, the Château de Châteaudun became the property of Jean d'Orléans, Joan of Arc's favorite companion. Between 1450 and 1468, he built the Dunois wing, a two-storey main building whose layout reflects the need for comfort that followed the Hundred Years War. He also built a Gothic Sainte Chapelle adjoining the dungeon designed to preserve the relics of Christ.
The construction work ends in the sixteenth century by the construction of a second wing facing the Loir, wing called "Longueville", the name of the family having built it.
The deep originality of Châteaudun Castle comes from the fact that the Middle Ages gradually disappeared in favor of the Renaissance while making perfectly cohabit the two styles.