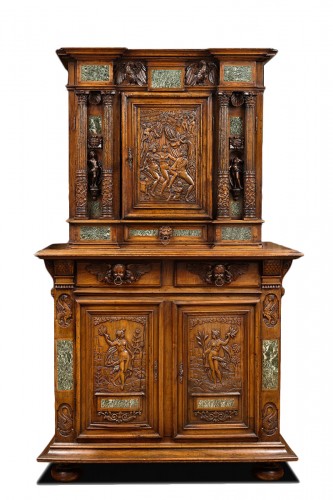 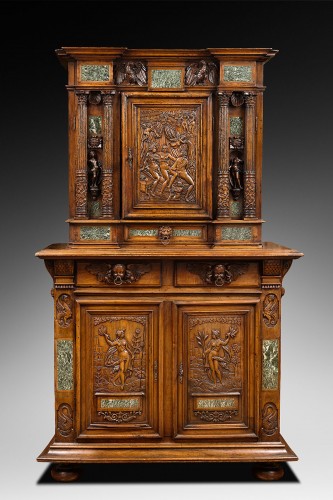 From king Henri II’ reign French furniture enters an important phase of evolution and its structure changes. From now on artisans draw inspiration from the Antic architectural system inherited thanks to Italian artists. Furniture employs organization principles and balance rigour. Thus the dresser’s facade acts as a small palazzo front with pilasters and columns supporting entablatures and pediments.

The architecture’s rigour plays with an ornamental vocabulary also drawn from Antiquity and experimented according to the artist’s taste. This rebirth first appears on royal projects thriving under François I’s reign such as the château de Fontainebleau where the greatests artists of the time, and especially Italians, work together. Palm leaves, raies de cœur, putti, sphinxes and grotesques motifs are broadcasted through engravings. Cabinet-makers work alongside leaflets and books of ornaments to enrich their creations.

This dresser demonstrates the Italian influences and embodies Fontainebleau’s creations from the 2nd half of the 16th century. Its structure follows architecture with refined fluted columns and cornice.

The entablature as well as each posts, drawers and door-leaves are inlaid with white veine green marble.

The lower body opens with two door-leaves and two drawers inside the belt. It stands on a moulded plinth with flatened bun feet.
The lower body’s posts are adorned with long neck swans carvings, detailed in the feather drawing, as well as female sphinxes framing a marble cartouche. The door-leaves bears a half naked draped female figure decor inside a moulded frame. The women stand against a natural landscape background. The figure carrying flowers is Flora, allegory of Spring while the other one, holding a sickle and wheat ears is Ceres, goddess of agriculture and fertility, a figure of Summer.

The theme of the seasons, reinvented during the late 16th, century was one of the most employed by the school of Fontainebleau. Female figures are depicted undressed to highlight their delicate silhouettes motivated by the traditional code of figuration later acknowledged by Cesare Ripa’s Iconologia published in 1603.

Drawers are carved in a higher relief with winged putti heads and the consoles are enriched with scales motifs. These consoles support an overlapping table on which stands the upper body.


The upper body rises on a projected base with marble inlays and a central hidden drawer bearing an astounding high relief lion’s head.

Two pairs of fluted columns ringed with vine branches frame the only upper body’s door-leaf. Between each set is carved a niche hosting a male and a female figure carved in the round as a well as shells.

The central door-leave is finely carved. A male figure, crowned with vine branches – this attribute leads us to identify him as Bacchus – is accompanied by two women on a canopy bed while two putti chastely draw the curtains. Two other putti brings a flower basket, a cornucopia and a flower bouquet.

A large entablature stands on the columns with two eagles sreading their wings.

Every aspects of this dresser is characteristic of the French 2nd Renaissance. The structure, proportions, the division of the ornamental spaces answer to criteria edicted by the Fontainebleau’s workshops. While the composition is clearly architectural the support elements are confined to four elegant fluted columns.
The door-leaves are enriched with goddess, dancing female allegories and fantastic beasts drawing inspiration from Antiquity and Italian art imbued with Fontainebleau’s Mannerism.
This two bodies dresser embodies the finest creations of the Val-de-Loire workshops during the 2nd half of the 16th century. 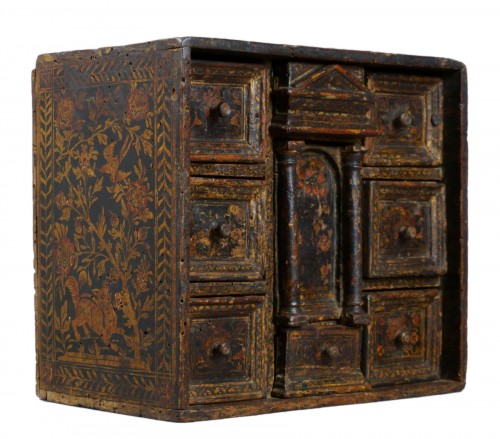 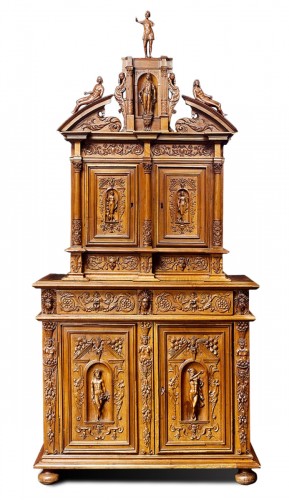 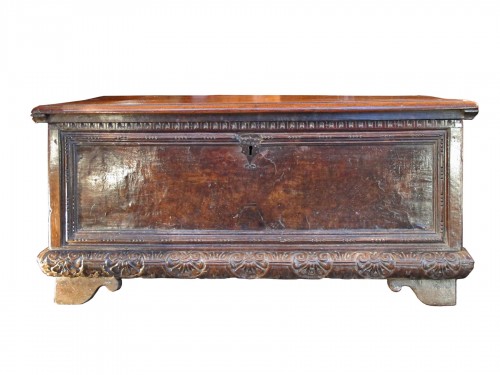 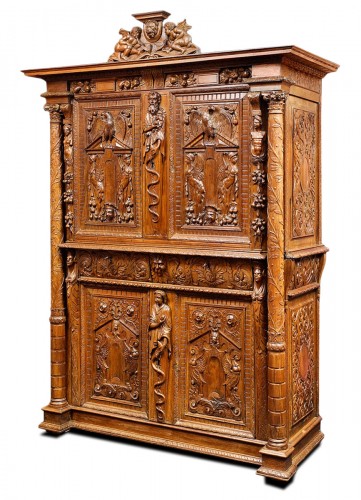 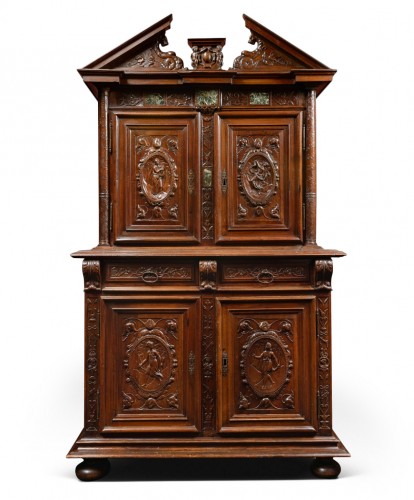 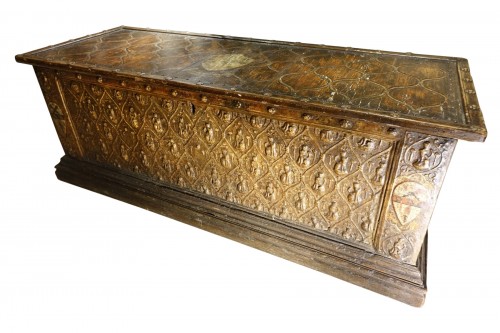