Sébastien Louis Guillaume Norblin De La Gourdaine (Warsaw 1796 - 1884 Paris): Twelve Drawings illustrating the Signs of the Zodiac, preparatory for the Decor of the Small Salon of the Baths in the Hotel Lambert
Watercolour, gouache, graphite
Diameter: 205 mm (approximately) (8 1/8 in.)
On the verso of several drawings: A Landscape, Study of Legs, A Woman with a Laurel Crown, Man seen from the Back
graphite

Of Polish origin, Sébastien Louis Guillaume Norblin de la Gourdaine was painter and draftsman active in France in the nineteenth century. Norblin was in contact with the Polish community in Paris and among them he met Princess Czatoryska, who appointed him professor of drawing at the Polish Girls’ Institute and commissioned him with the decoration of the small salon in the baths of the Hotel Lambert, which she had acquired 1843. The present suite of drawings of twelve zodiac signs is related to this project. The decorations themselves have been lost and little is known of them. Nevertheless, several documents and a drawing at the Musée des Beaux-Arts in Lyon offer some information about the decor. 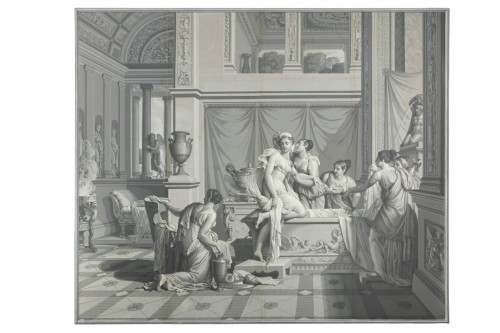