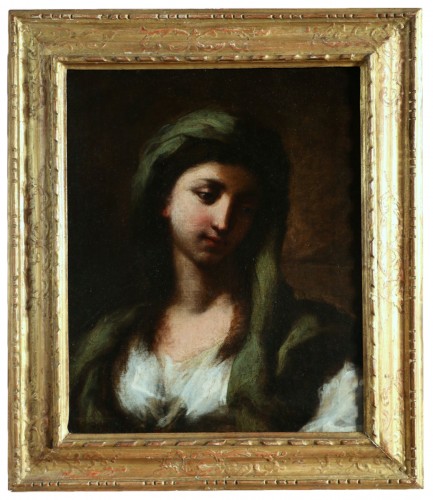 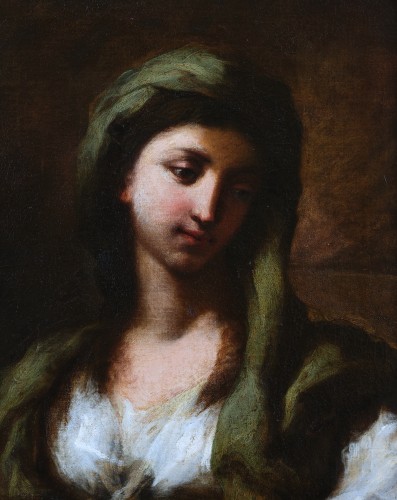 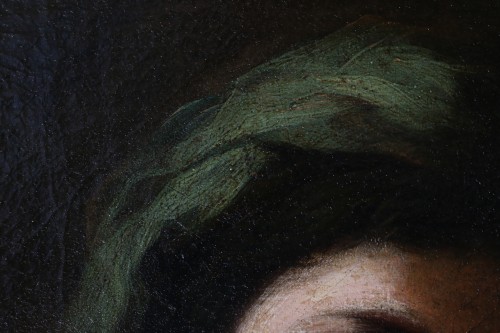 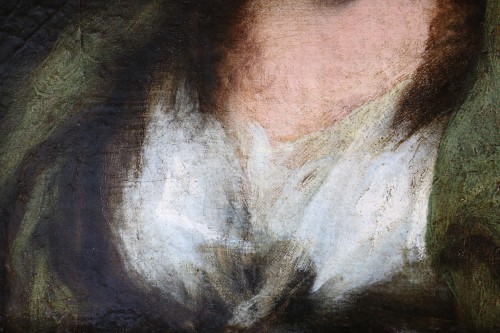 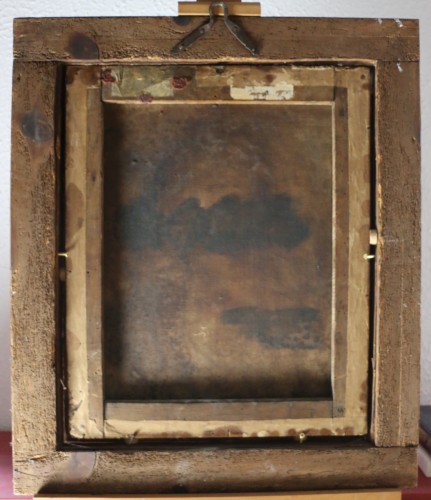 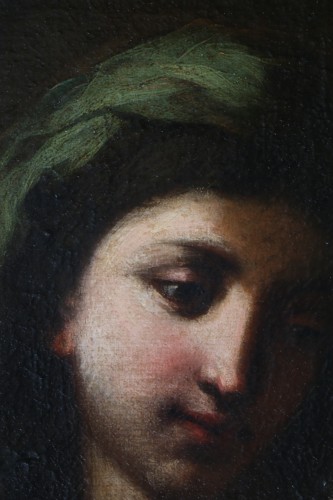 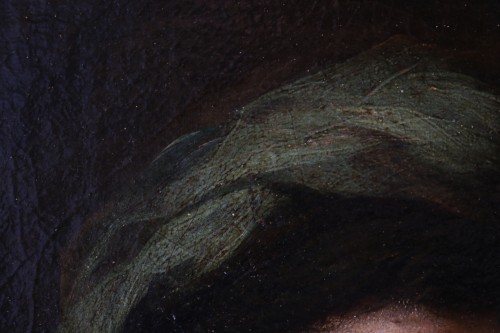 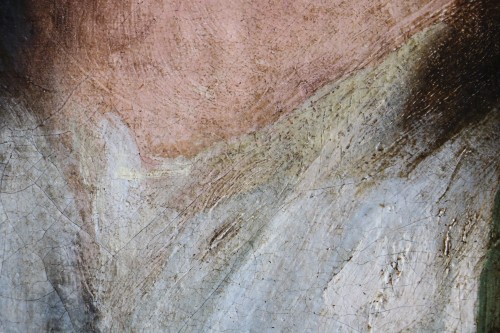 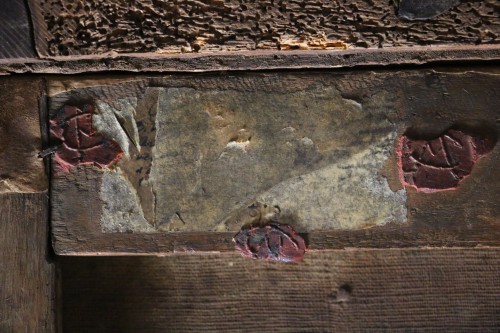 Everything in this beautiful and moving canvas reminds us of the Bolonaise school and especially the workshop of Giuseppe Maria Crespi.
The palette of soft colors that a delicate chiaroscuro accompanies, the touch of paint and this particular way of putting the material on the canvas, finally the treatment of the subject.
Moreover, with regard to the subject, questions arise. Is it the portrait of a young woman or a saint? Indeed, during the cleaning of the tenuous traces of a halo appeared. Is it a repentance or traces of a halo?
The canvas has a monogram on the top left (vc)

He trained with D. M. Canuti, then in Cignani's studio (1684-1686). For another two years he was in close contact with G. A. Burrini, who certainly helped to direct him towards the study of Venetian painting. He stays twice in Venice and also visits Parma, Urbino and Pesaro. The glories of the local tradition also have a considerable role in his formation, such as the art of Ludovic Carrache and that of Guerchin, which he practiced even to copy. His first work datable is the altar painting of the church of Bergantino (province of Rovigo), from 1688, which follows, quite coherently, the painting of 1690 depicting St. Anthony Abbot tempted by the demons (Bologna , S. Nicola degli Albari), baroque in its scenographic layout, but resting on certain and undeniable pictorial qualities. The masterpiece of those years is the frescoed decoration of two rooms of the palace Pepoli Campogrande of Bologna (1691): there, any pathetic in the gestures or the expressions, all violence luminist was appeased in this human version and profoundly cordial of mythological themes (Hercules on the chariot drawn by the hours and the Banquet of the gods).

The realism of certain details is a sign of an attitude clearly opposed to the classicizing trends of the Bolognese school, represented at that time by Cignani, Franceschini and Creti.
During the last decade of the seicento, Crespi painted masterpieces such as the Girl with the Dove (Birmingham, City Museum) or the Musician (Boston, Mr. F. A.), a naturalism quite direct. In the early eighteenth century, he executed for Prince Eugene of Savoy Achille Education (Vienna, KM), a work of which we can compare other important paintings, such as Aeneas, Charon and the Sibyl, Tarquin and Lucrece (Washington, NG), The Troyes Blind Polymnestor (Brussels, MRBA) and the altar painting depicting the Extase of St. Margaret (Cortona, Diocesan Museum), the famous Fair of Poggio a Caiano (Uffizi), which testifies no only peanut memories, but also Crespi's interest in Dutch genre painting, which he had been able to study in the Medici collections. If the Fair is a "slice of life" of great scenic skill, the series of Sacraments (Dresden, Gg), painted c. 1712 for Cardinal Ottoboni, reveals a meditation on the art of Rembrandt. This set of 7 paintings is Crespi's masterpiece and one of the major achievements of 18th century Italian painting.
A retrospective was devoted to the artist (Bologna) in 1990.