Wilhelm Freddie - My Sister in March and the Attributes of Venus, 1948

Wilhelm Freddie is one of the most important figures in twentieth-century Danish art and culture, and doubtless one of the most derided and vilified. Shown at the Autumn Salon in Copenhagen in 1930, his early erotic Surrealist works caused a public furore and critical outrage – it is said that one visitor tried to strangle him during the launch party. Later his paintings were seized as “improper” by British customs and so were not hung in the major International Surrealist Exhibition in London in 1936; only a few smuggled drawings made it through to the New Burlington Galleries. The following year the presentation of his Meditation on Anti-Nazi Love got him banned from Germany on the grounds of “insults to the head of state”. And when he organized one of the last Surrealist exhibitions in Copenhagen – in the autumn of 1940, with Bjerke-Petersen, Harry Carlsson, Erik Olson and Elas Thoresen – he was violently attacked by the local pro-Nazi press: “The Ancient Greeks would have hurled him off a cliff-top into the sea, and that is just what we shall do, once our new Europe has become a reality.” It was not until the late 1960s that his work was finally acknowledged and the seized pictures released by the Copenhagen police. Official recognition came in the form of the Thorvaldsen Medal in 1970 and such public commissions as the decor for the Vallensbaek school in 1971.
In 1935 the Surrealist movement went international, making its presence felt throughout Europe. Exhibitions backed up by lectures and publications were the main sources of information, with magazines ensuring rapid circulation of writings, artworks and standpoints. In Denmark the four numbers of Konkretion played a decisive role in 1935–1936: the magazine kept close tabs on Surrealism and devoted the whole of its final issue to Paris writers and painters, under the heading “Surrealism in Paris”. 1936 also brought Freddie’s Sex-paralysappeal, inspired by Salvador Dalí’s Retrospective Bust of a Woman: it comprised a bust of a woman wearing a glove as a hat, part of a picture frame, a phallus painted on the woman’s cheek and wine glasses hanging from her neck. The work was confiscated as “pornographic” and could henceforth only be seen in photographs. In his Dictionnaire général du surréalisme et de ses environs Edouard Jaguer likens Freddie’s meticulous technique to that of Salvador Dalí, but is careful to distinguish their differing agendas: “Freddie deviates from Dalí’s virtuosity in an aggressiveness of touch and colour, an ingenuous intrepidness, that sets him closer to Böcklin or, more recently, certain Surrealist ‘outliers’ like Styrsky and Perahim. There is no trace here of the academically sophisticated complacency that soon made Dalí’s work so fashionably appealing.”
During the 1940s Freddie diversified, designing decors and layouts for exhibitions, window displays and living rooms. Abandoning his Daliesque strategy of the 1930s, he began working much faster, the outcome being – My Sister in March and the Attributes of Venus is a fine example – more unified compositions in which bodies are stylised and objects rendered geometrical. In March 1948 – the month referred to in the title of our picture – he went to Switzerland, where he worked as an exhibition scenographer; the organisation of this painting reflects the installations of objects and materials he was creating at the same time, with their associations of suspended fragments and archetypal symbolic motifs. 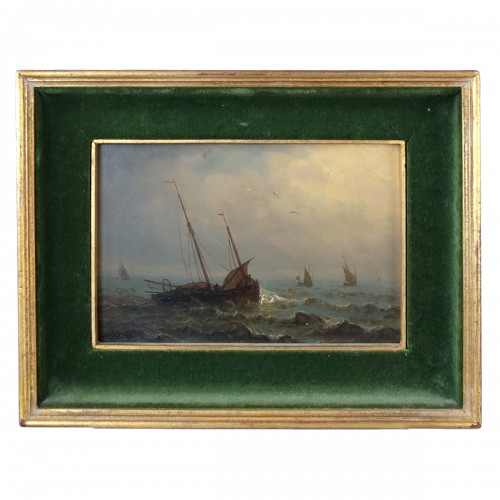