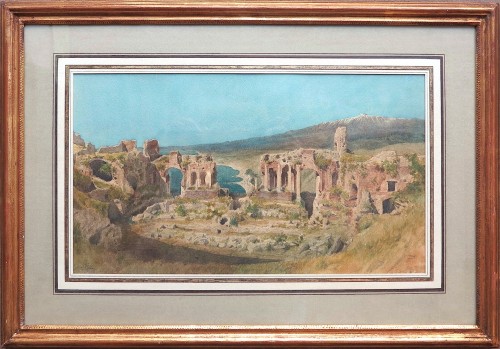 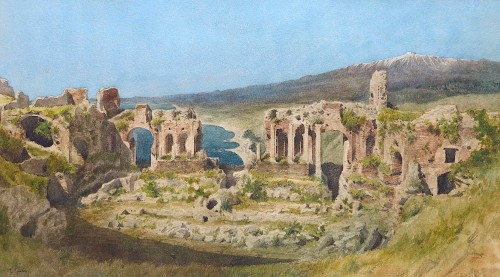 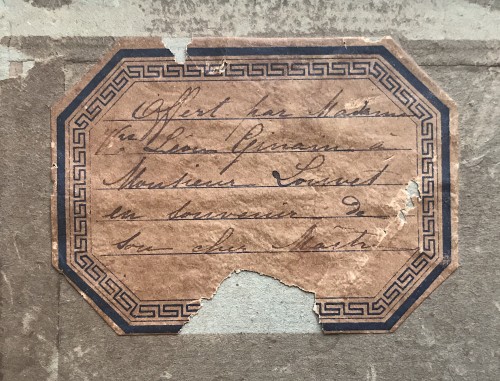 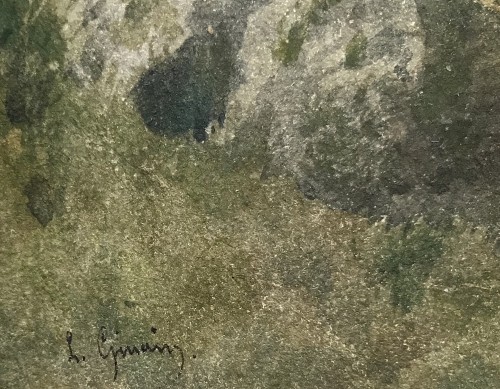 View of the theater of Taormina

Regarding the author of the watercolor, Léon GINAIN began his studies in the architecture section at the Royal and Special School of Fine Arts in Paris in 1843 with Louis-Hippolyte LEBAS as master.
He obtained the first prize of Rome in 1852 with the subject: A Gymnasium.
Subsequently, he was a resident at the Villa Medicis between 1853 and 1857. He made a shipment in his 4th year (1857) of 10 drawings entitled Restoration of the Theater of Taormina.
Upon his return to France, GINAIN started as an architectural consultant at the City of Paris and became architect of the 6th arrondissement in 1861 and auditor of the Civil Buildings in 1876-1877 and finally honorary architect of the city of Paris in 1881.
He was a member of many architectural companies including the Central Society of Architecture, the French Society of Architects and the Council of Civil Buildings.
He was also a prominent member of the jury of the Salon des artistes français and became its vice-president from 1887 to 1890.
Professor of Architecture at the Ecole des Beaux-Arts in Paris, eight first grand prizes came from his studio.

To his credit :
- He built from 1867 to 1876, the church Notre-Dame des Champs.
- In 1875 he began the New Faculty of Medicine. Indeed, the former Royal School of Surgery is surrounded by new buildings at the Boulevard Saint-Germain to become the new Faculty of Medicine in Paris. GINAIN is responsible for their design. After his death, the works were completed by the architects Charles DUPREZ (1834-1903) and André CORNIL-LACOSTE.
- He built the clinic Tarnier, 89 rue d'Assas and 10 avenue de l'Observatoire in the 6th arrondissement, between 1877 and 1880.
- He realized the Galliera Palace between 1878 and 1894 at the request of Maria de BRIGNOLE-SALE (1812-1888), Duchess of Galliera after her marriage with the Marquis Raffaele de FERRARI (1808-1876). This building is the Galliera Museum now.
- He built the Hospice Ferrari in Clamart, retirement home for housekeepers, between 1878 and 1888 at the request of Maria de BRIGNOLE-SALE.
- In 1886, he enlarged the City Hall of the 6th arrondissement of Paris.
He participated in 1860 in the Competition for the construction of the Paris Opera. He will be beaten only by Charles GARNIER.

Distinguished several times, he was first class medalist in 1861, grand prix at the 1889 World's Fair. GINAIN was knighted in the Legion of Honor in 1867 and promoted to officer in 1894. He was elected on March 12, 1881 member of the Academy of Fine Arts (3rd section, chair III).


Regarding the place represented, it is the Greco-Roman Theater of Taormina. This theater is one of the largest in the ancient world because of its size and location. The monument of more than 100 meters in diameter can accommodate nearly 5,500 people with exceptional acoustics. Dug in the rock, of classical form, the set built largely of bricks probably dates from the Roman period (3rd century BC) and is remarkably preserved; which makes it a particularly popular ruin of Sicily.


On the reverse of the frame, a handwritten label mentions that this drawing was offered by Mrs. Léon GINAIN widow to Mr. LOUVET in memory of his dear Master. Monsieur LOUVET is in fact Louis-Albert LOUVET (Paris, 1860 - Paris, 1936), French architect, pupil of his father Louis-Victor and Léon GINAIN at the Ecole des Beaux-Arts in Paris. He was first second Grand Prix of Rome in 1886 and participated in the design and construction of the Grand Palais from 1896 to 1900.

This watercolor by Léon GINAIN probably corresponds to an inventory of the ruins of the theater of Taormina realized prior to the restoration work that will be undertaken later and which the artist made the shipment entitled Restoration of the Theater of Taormina in 1857.