Venus and Mars surprised by Vulcan, circa 1580, circle of Jacob de Backer 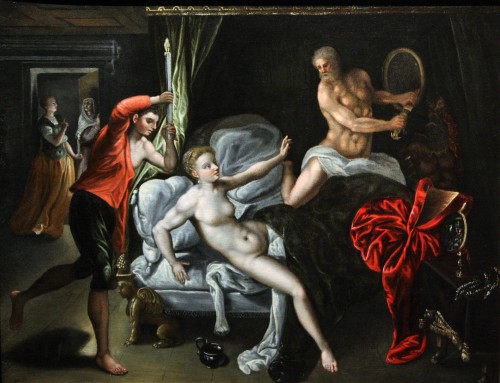 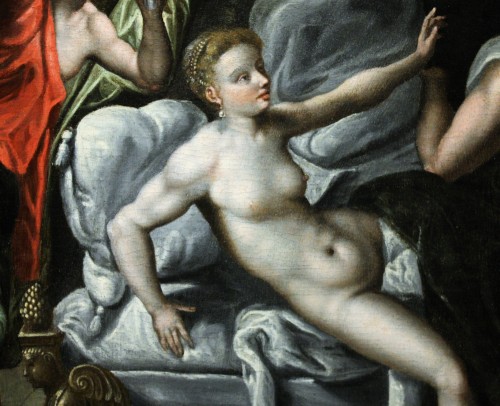 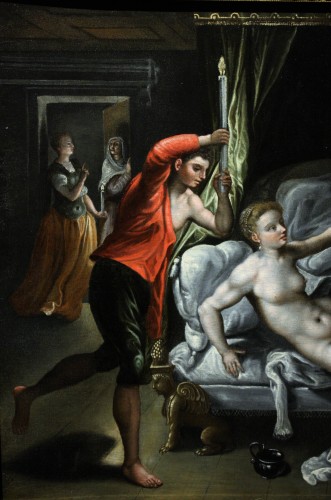 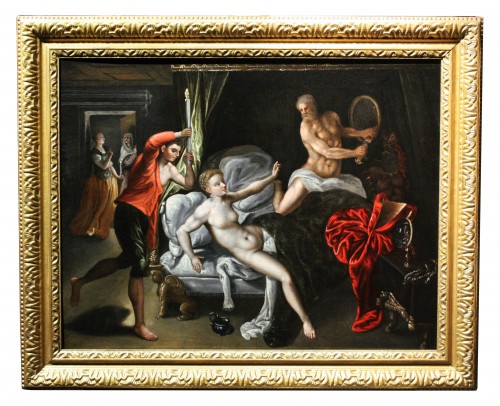 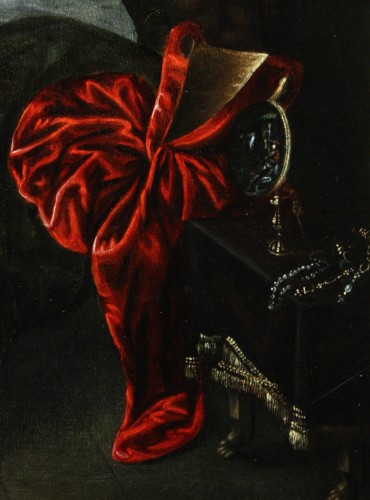 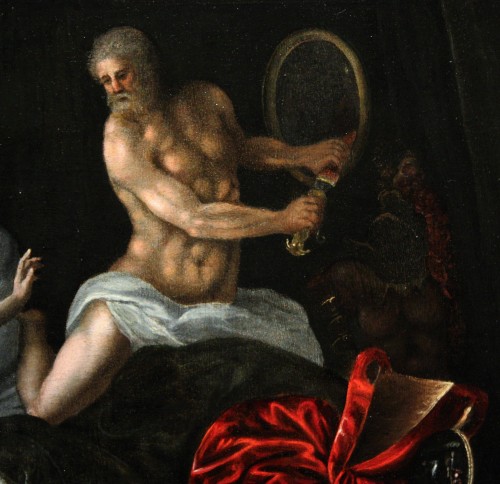 The subject of our work is derived from Ovid's metamorphoses, where the author tells the story of the loves of the Gods of Olympus. Several interpretations of this story have became very succesful during the Renaissance and were illustrated by famous Italian and Nordic painters such as Tintoret, Wtewael, De Clerk and Goltzius, Paris Bordone.
Our artist features the scene in the intimacy and darkness of a bedroom, lit by candlelight, bringing a dramatic dimension to the event.
As in a theater, once the curtain is lifted up, the scene is happening in front of the viewer. Venus and Mars on the bed are surprised by the unexpected arrival of the husband of Venus, Vulcan who bringing a candle catches his wife with his lover. While she tries to hide her nakedness under the sheets, Mars, faithful to his warrior status is ready to pull out his sword and punish the intruder.
At the foot of the bed decorated with sphinge is placed the beautiful dress in red velvet corset of the goddess, and we also see the helmet and breastplate of Mars on the bed. The jewels and a mirror are carefully placed on the armchair.
Vulcan appears to us as a young man, dressed in haste, as evidenced by an empty shirt sleeve, barefoot. The goddess looks nonchalant and exposes her nakedness, raises her right hand by wanting to calm his lover and prevent the blood to flow. In the background, the two servants are talking in front of the door, the witnesses of a household scene and perhaps those who have alerted the unfortunate husband.
The artist chooses to depict this scene in the darkness of a room lit only by candlelight to amaze us with its clever play of shadows and lights, its dazzling touches, illuminating parts of the scene and bringing depth to the composition.
Our work is distinguished by its palette of rich and intense colors, the ingenious use of the chiaroscuro, the modeling of naked bodies with pronounced muscles, delicately sculpted with the help of shades of gray on the body of young women, and beige brown shades on the body of Mars.
The artist adds small details of daily life to transfer the painting from the era of the gods of Olympus to its contemporary world as evidenced by the chamber pot at the foot of the bed.
Testimony of a pronounced taste for mythological scenes, imprinted with Nordic mannerism associated with the light obscure caravagesque influence our painting was originally intended for a discerning and refined collector ain order to embelish his interior or even his private art cabinet.

Jacob De Backer Antwerp, 1545 - 1585 Painter of mythological and religious subjects, much appreciated in his time, renowned Italianist, in the manner of Floris, he trained in Florence and Rome, where he stayed between 1557 and 1560, and would have been the student of Antonio Palermo, then Hendrick Van Steenwijk. According to Van Mander, he died at the age of thirty, but no mention is made of his dates of birth and death. His works have disappeared for the most part. We know that he painted, for the church of Our Lady of Antwerp, the Triptych of the Last Judgment, still placed above the tomb of the printer Christophe Plantin, who died in 1589. Among his paintings, we can mention: Jesus blessing the children at the Museum of Antwerp, Venus, Bacchus and Love at the Museum of Perpignan, a beautiful suite of the Deadly Sins at Naples, Capodimonte, Venus and Love in Berlin. 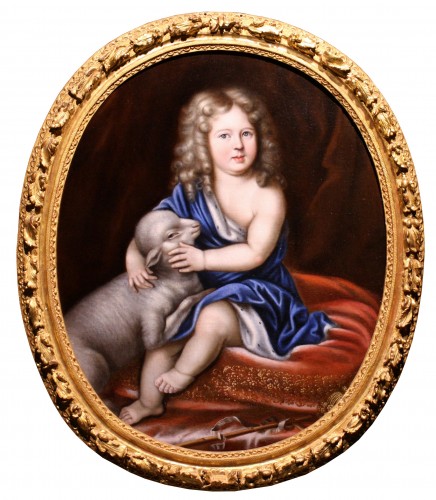 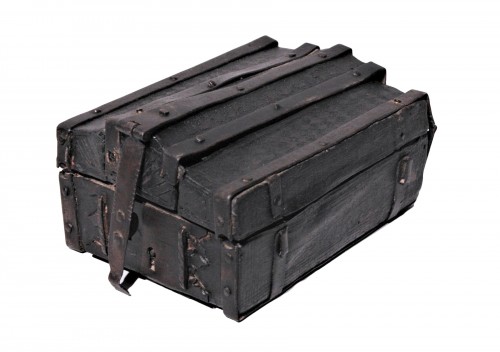 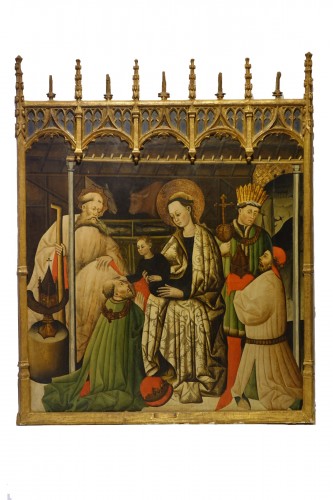 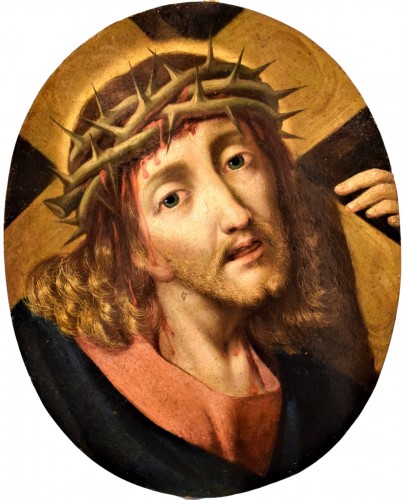