Architectural Capriccio with the Fountain of the Four Rivers, c. 1651–1654

Born in Paris, Thomas Blanchet was a key figure on the Lyon art scene in the seventeenth century. Beginning his training in the Paris atelier of sculptor Jacques Sarrazin, he seems to have soon transferred to that of Simon Vouet, having decided to devote himself to painting. Exactly when he went to Italy is not known, but there is documentary evidence of his presence in Rome from 1647 to 1653 in the stati delle anime, the parish censuses of “souls”, under such exotic appellations as Tomaso Blance, Monsù Blancis and Thomaso Blangett.1 The greater part of what he painted in Rome comprised architectural capriccios in the style of Jean Lemaire while also betraying the influence of Poussin, but Blanchet’s experience of Rome was far more varied and complex than this body of work might suggest. In addition to Poussin, Andrea Sacchi and Alessandro Algarde are often cited by his biographers as his most enduring influences – Sacchi was his teacher and Algarde a great admirer – but as his career in Lyon would demonstrate, he had also assimilated Baroque models including Pietro da Cortona for decorative painting, Borromini for architectural ornamentation and Bernini for sculpture. In 1655 Blanchet moved to Lyon, where he found official status as a painter for the city: he decorated the Hôtel de Ville (1655–1672) and the Abbaye des Dames-de-Saint-Pierre (1674–1684, now the Museum of Fine Arts), as well as providing ephemeral decors for celebrations, ceremonies and funerals, often hand in hand with the Jesuit priest Ménestrier. When he was appointed First Painter of the City in 1675 he was already regarded as Lyon’s Le Brun.
The vogue for ruins began in Rome with Poussin and his assiduous study of the city’s ancient monuments. Poussin was out to enliven his landscapes, but he was also emulating his antiquarian friend and patron Cassiano dal Pozzo, who would find his niche in history for having put together his Museo Cartaceo (Paper Museum) with the help of the painter and his circle. When Blanchet arrived in Rome in the 1640s several French painters – Jean and Pierre Lemaire, Charles-Alphonse Dufresnoy and others – were already working this vein, as was the Italian Viviano Codazzi.2 While his training and milieu point to aspirations to history painting, it was his capricci and prospettive that ensured his esteem in Roman art circles and his success with collectors: “He soon became so famous for his paintings of ancient buildings and prospettive that he was able to live comfortably . . . So resounding was the name of Signor Tomaso throughout Rome that he expected to make his fortune with his little pictures.”3 Blanchet did not, however, restrict himself to “little pictures”; he expanded his capriccios to the imperatore format, an example being this Architectural Capriccio with the Fountain of the Four Rivers, long part of a prestigious private collection in Campania and on public view here for the first time.
The orthogonal structure of this composition – the verticals of the monuments intersecting with the buildings on the horizon – is typical of Blanchet, as is the bluish row of mountains in the distance. His talent is also evident in his creation of atmosphere, in this case via the rising mist that veils a strip of sky and heightens the backlit effect. On the other hand the insertion of a contemporary monument into a capriccio devoid of any historic event is much less common in the Blanchet oeuvre; here it conjures up the parallel between the Ancients and the Moderns as the picture’s real subject and thus prefigures the spectacular turn it would take under Giovanni Paolo Panini and Hubert Robert in the following century. Visually speaking, the parallel is expressed as a dialectic of contraries in a composition divided into two rigorously identical halves, one devoted to a Constantine-style triumphal arch, the other to Bernini’s Fountain of the Four Rivers: opposition between solids and voids, weightiness and lightness, angles and curves.
The perspective of the arch has the effect of making the fountain the
junction of all the vanishing lines. Created by Bernini and his team
between 1649 and 1651 in the very centre of the Piazza Navona, this was
part of Pope Innocent X Pamphilj’s programme for the beautification of his
family’s stronghold. Blanchet, who was probably present at the
inauguration, had thus chosen a monument emblematic of pontifical
modern Rome, maybe in response to the ambitions of a collector who
demanded that the Pope’s name be visible on the base of the obelisk.
Given that Blanchet left Rome in 1654, our Architectural Capriccio is one
of the earliest known images of the Fountain of the Four Rivers, with the
engravings published by Louis Rouhier the year of the inauguration of the
monument. 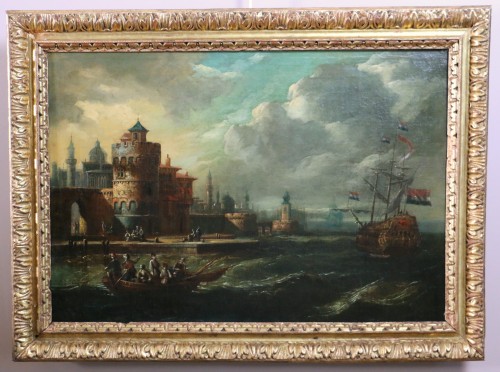 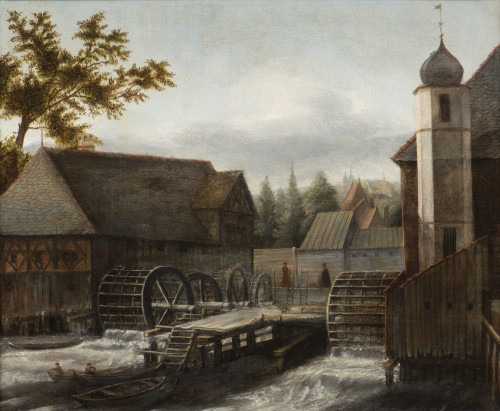 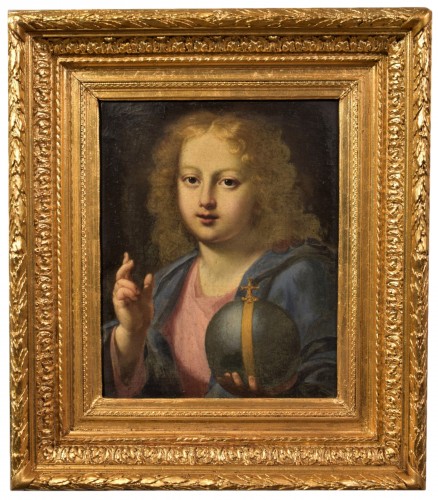 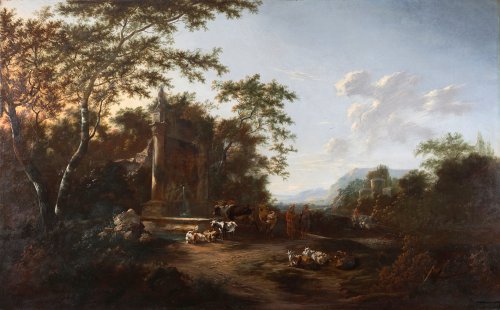