De Bar was a mediocre French landscape painter who is best known for his engravings that he made for popular magazines. He went to Egypt in 1856 to participate in an expedition to the sources of the river Nile. The expedition left, one year later, without our painter. Back in France in 1857 he painted one, just a single painting representing Egypt: ours.

This dreamy view represents the three pyramids of Giza. Indeed three: the fourth one at the extreme left is a way too large representation of the first queen’s pyramid of Pharaoh Mykerinus.
The central pyramid, second from right, is the pyramid of Kephren, easily recognizable by its partly retained casing at the top.

As to the rather mountainous desert: a romantic exaggeration of the rather flat surface of the plateau of Giza.

In this single souvenir de Bar has summed up the mystery of Egypt. 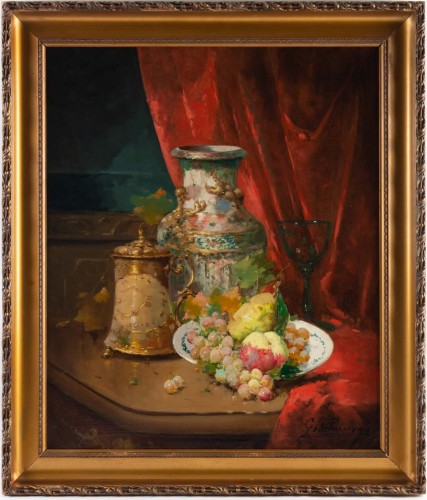