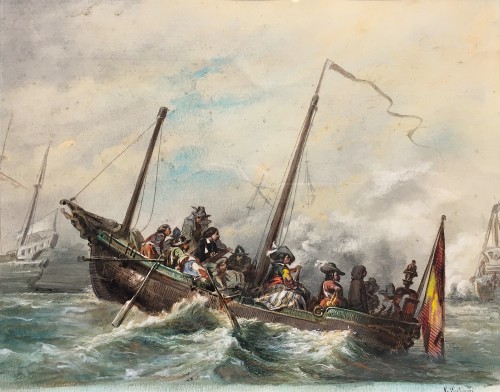 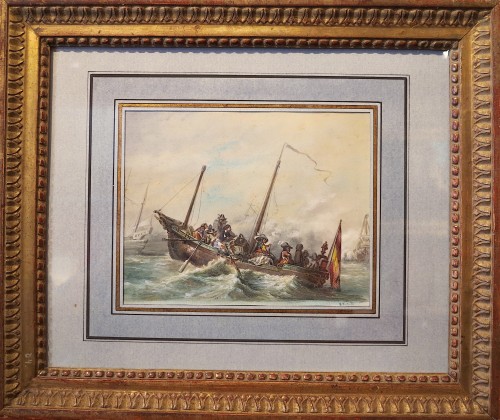 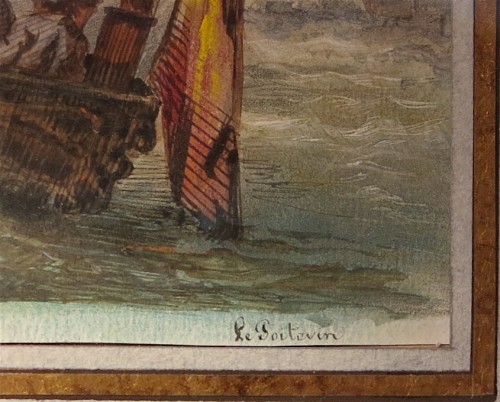 Van de Velde, who usually followed his friend Ruyter in the maritime campaigns, draws a naval battle from nature

Related work: painting exhibited at the Paris Salon of 1843 under the number 786

Our watercolor is preparatory to the painting that Le Poittevin exhibited at the Salon of 1843, which was lithographed by Charles Jacque. The Revue des Deux Mondes considered at the time the painting "extremely neat, smooth, clean, in a word ready to deliver. This coquetry is justified by real qualities ". Between the watercolor and the painting (in view of the lithographed version) there are few differences: the flag of the main mast a little longer and sinuous on the board; on the right of the boat, the gentleman with the white plumed hat wears another (simpler) hat in the picture; in front of him the character with the hood is replaced by a soldier wearing a morion; to the left of the galleon on the right, the clouds of smoke are replaced by a boat. The Poittevin was only illustrating the work habits of the marine painter Willem Van de Velde (1611-1693), who as soon as he heard about a fight that his friend Admiral Ruyter (1607-1676) was going to surrender, embarked immediately for the sole purpose of attending the action and representing its movements with more truth, not hesitating to risk his life for it. The Poittevin, who had been heavily influenced by Dutch painting during a stay in the Netherlands, made several works featuring Dutch painters of the seventeenth century, and particularly Willem Van de Velde; he thus exhibited at the Salon of 1845 a Van den Velde studying the effect of the barrel that his friend Ruyter has drawn for this purpose, which was reproduced in the Illustration in 1845 (N ° from March to August), with the following comment: "A navy with a cheerful tone, an easy touch, and makes the most of the place the characters leave him. These characters, and among them Van den Velde at his easel, are placed on a large and heavy boat, which looks like a quay. This boat is probably exactly copied from nature; but it presents itself by a cutaway in a way not very picturesque. At the same salon he exhibited a second painting on the subject of another famous Dutch naval painter: Backhuysen, who was told about piracy by the fishermen of Schweningen. In 1850, he exhibited Backhuysen drawing from nature in the dunes of Schweningen and Guillaume Van den Velde, a Dutch painter, embarked to meet his friend Admiral Ruyter on his arrival in Rotterdam. A student of Louis Hersent and Xavier Leprince at the Ecole des Beaux-Arts, Poittevin (whose real name was Poidevin) narrowly failed the Prix de Rome in 1829, which did not prevent him from exhibiting in 1831 at the Salon , and this without stopping until his death. Even if he had an activity as an illustrator and caricaturist (see his lithographs of Diableries and his erotic drawings or pornographic), the main part of his work represents scenes of fishing and marine life on the Normandy coast and in France. particular cauchois. Some critics of the time will evoke the sometimes repetitive side of his compositions. Romantic in the 1820s and 1830s (with works close to those of Isabey or Auguste Biard, with whom he is a friend and sometimes collaborator), his style becomes progressively more realistic thereafter. Like Charles Mozin (another pupil of Leprince) with Trouville, he is one of the first artists to launch the village of Etretat as a social seaside resort; it was his friend Eugène Isabey who made him discover the place, and he quickly acquired a house, La Chauferette, where he welcomed Gustave Courbet in 1869. He was appointed official painter of the navy in 1849, following Louis-Ambroise Garneray, Louis-Philippe Crépin and Théodore Gudin (the latter two named in 1830). Very appreciated of his time, he received several official awards during the Salons: first class medal in 1836, 2nd class in 1831 and 1848, 3rd class in 1855. His Parisian studio was located at 5, city Treviso, in the current 9th district. 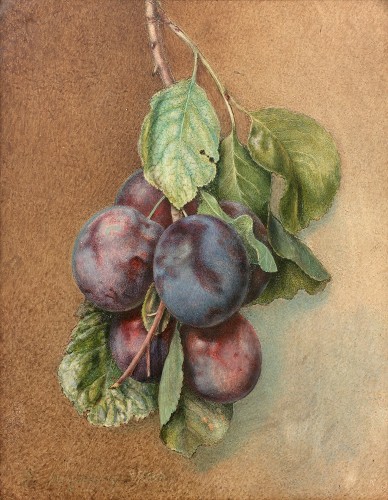 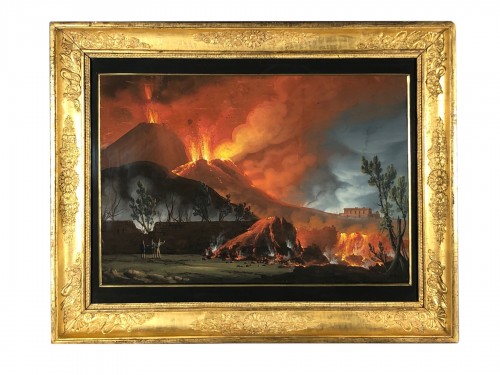 The eruption of Vesuvius of 1834