Titled below with pen: Joseph going to meet his father Jacobs.
Preparatory drawing on the painting of the same composition appeared a few years ago.
He joined France in 1747, traveling in the provinces.
He moved to Paris in 1759, where he specialized in portraiture.
He travels to Italy and becomes a painter at the court of Parma.

Period and School: Switzerland Cavigliono (1736 - 1799)
Subject: Joseph finds his father at the doors of the desert
Inscriptions: monogrammed and dated J. 1761 lower left 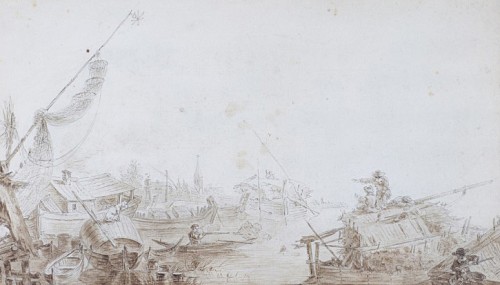