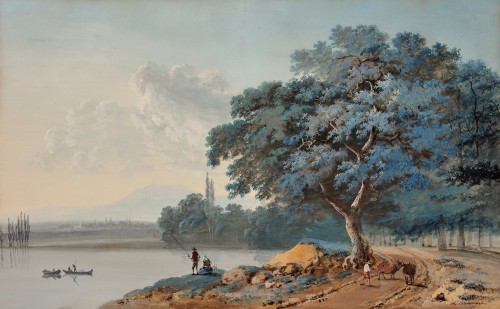 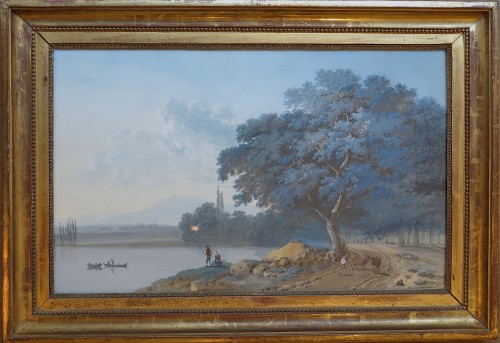 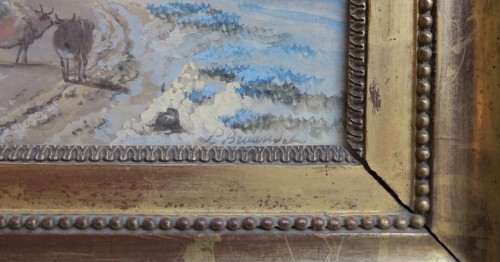 Bruandet is considered, with his eldest Simon-Mathurin Lantara (1729-1778) and his friend Georges Michel (1763-1843), as the first true French landscape painter, in love with nature, painted unvarnished, and which will claim the painters of the school of Barbizon.
Born in the parish of Saint-Michel, he formed a trio of friends with Jean-Louis Demarne and especially Georges Michel, of whom he was the inseparable companion, and on whom it was considered that he had a bad influence. Bruandet, nicknamed “that great devil of Bohemia” by Michel’s second wife, had a brawling spirit, especially when he had drunk, which happened to him rather frequently, and in important proportions. When he was painting or drawing, however, he was of a very calm nature and was very demanding with himself, with a very careful execution, which did not prevent him from time to time, of producing works very quickly. of low quality for “food” reasons.
His working fields were the woods and forests near Paris, and particularly Fontainebleau, the Bois de Boulogne and that of Vincennes; but from 1795 he moved a little further east towards Romainville and Pré Saint Gervais. We know the amusing anecdote, which illustrated his side somewhat “man of the woods”, according to which King Louis XVI, at the end of a day of hunting in the forest of Fontainebleau in October 1787, would have said there was met only boars and Bruandet.
More interested and adept at rendering the effects of nature, he confided very frequently the execution of the characters to his friends Taunay and especially Swebach-Desfontaines.
Bruandet exhibited at the Salon of 1791, 1793, 1795, 1796, 1799, 1801 and 1804 posthumously, and his principal pupil was Philippe Boudelot from Dijon. It is rightly considered that his paintings were very similar to those of the Dutchman Jan Wynants (1632-1684) and sometimes also to Ruysdaël.