A rich couple pointing at peasants outside a tavern entertaining themselves

Droochsloot was a very productive painter. Sadly, from the early 1630s, he often repeated the same subject: a village street with beggars. Clearly his earlier paintings, such as ours, are of a higher quality and of course also originality. These early, colourful paintings still show a strong Flemish influence, going back as far as Pieter Brueghel the Elder.

Our painter lived and worked practically his whole life in Utrecht, where he was socially strongly involved. In our painting a rich couple is watching poor peasants sitting outside a tavern. Is this a form of criticism at their loose behaviour? Most probably.
Such a low life genre scenes with happy peasants exceedingly merrymaking were both a source of delight and of instruction for the town population of this strongly Protestant society, which twenty two years later was to become officially the Dutch Republic in 1648. These paintings with peasants drinking, eating, smoking, dancing, flirting or fighting were often meant as lessons against misbehaviour. 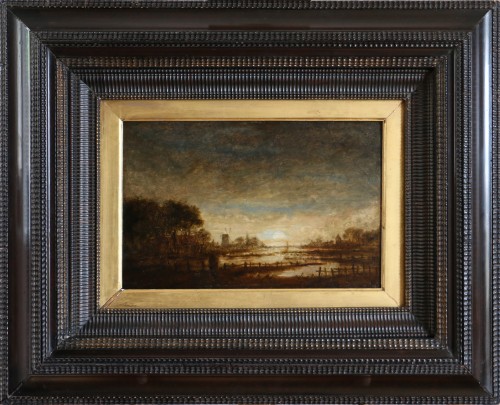