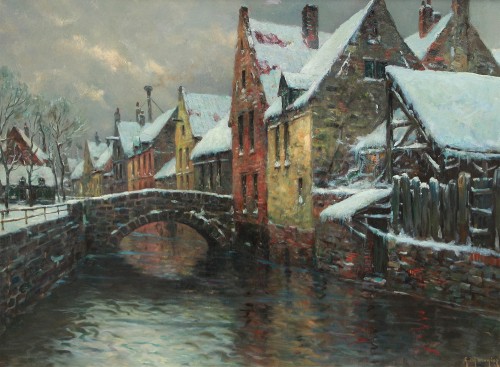 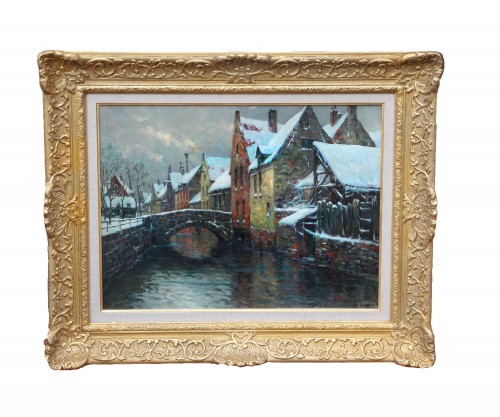 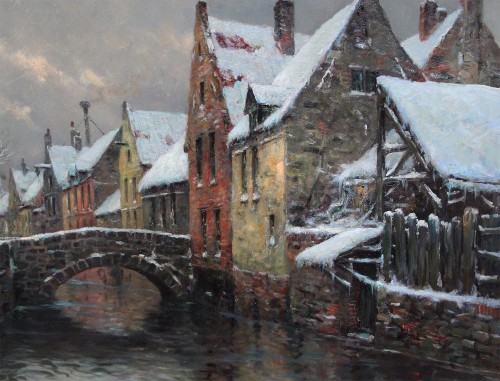 Georges Philibert Charles Maroniez (1865-1933) Snow in Bruges Oil on canvas signed lower right 46X61cm 67X83cm (Referenced under number A72 of the catalog raisonné) Georges Maroniez born in Douai on January 17, 1865 and died in Paris on December 11, 1933, a French painter, photographer and inventor. Georges Philibert Charles Maroniez shows a taste and gifts for drawing and painting. His father encouraged him but also asked him to do his law. After his studies, he began a career as a magistrate in Boulogne-sur-Mer (1891), and Cambrai (1897). In parallel with the faculty of law, he took academic courses at the School of Fine Arts in Douai, and in 1880 became a pupil of Pierre Billet (1837-1922) at Cantin. There he met the painter Adrien Demont (1851-1928), son-in-law of the realist painter Jules Breton (1827-1906). On his advice. In Wissant, he became friends with Adrien Demont and Virginie Breton, with whom he discovered the landscapes of the coast. Every summer for several years, around the Demont-Bretons, he met up with his friends from Douais: Fernand Stiévenart, Henri and Marie Duhem, Félix Planquette. This is the era of the Wissant group. We will also talk about the "School of Wissant" or "of the Opal Coast", including painters from Berck who were friends of the Demont-Bretons, one of the most illustrious being Francis Tattegrain (1852-1915). Thanks to the presentation and sponsorship of Adrien Demont, Georges Maroniez became, in 1889, a member of the Society of French Artists. In 1905, he decided to resign from the judiciary and devote himself entirely to his art. Mobilized in 1914, he was named Knight of the Legion of Honor 5 in July 1918. The Maroniez family moved to Paris in 1919, rue d'Aguesseau. In 1922, he was named Rosati d'honneur. New York public collections, Dahesh Art Museum: Boulogne-sur-Mer, castle-museum: Lille, Palace of Fine Arts
Price: 3800 €
Period: 19th century
Style: Other Style
Condition: Bon état, petite restauration d'usage 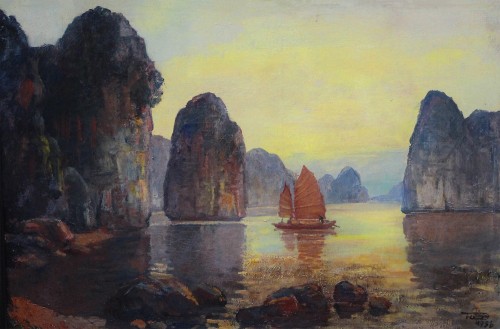